February 21, 2021 Ridley's Believe It Or Not Presidents Day

CV World Cases: The planet continues on an increasing basis with cases now over 424 million at 424,240,213 cases,  67,173,124 of which are active, 359,066,889  closed with 353,157,944 recoveries (98.35%), and passing the 5,900,000 barrier 5,908,945 deaths (1.65% )to continue the low trend of increased cases with increased recovery percentages and decreased death percentages with some plateaus, dips, and rises.
CV USA Cases: Total cases now passing 80 million at 80,145,282 with 27,255,881 active cases  of which 11,130  are serious or critical, (15,517 on 12/12) (back to steady decreases despite the increase in active cases due to the relative mildness of the Omicron variant) to .041 % of active cases (back to back steady decreases despite the increase in active cases due to the relative mildness of the Omicron variant  and to increase  the reduction from the 29,271 peak on 12/31/2020 to 18,141, 52,889,401 closures with 960,157 deaths (1.82%) and with 51,929,244 recoveries (98.18%). Our death rate percentage is .17%  higher than the world’s death rate.
Standing: On a deaths per million population measure on a steady but slow climb to 2873 the U.S. ranks behind Peru (6211) the new number 1 which has had a quantum leap in deaths previously unmatched which was a change in the classification to give Peru the a new method of reporting; Bulgaria (5127), Hungary (4501), Romania (3291),  Brazil (2998), and Poland (2907) and slightly higher than Argentina (2735), Columbia (2670), Belgium (2563), Italy (2540), Mexico (2407), Russia (2371), UK (2346), Chile (2140), Spain (2105), France (2025), Portugal (2056), France (2140), Ecuador (1944),  Bolivia (1791),  Sweden (1648) that never closed its economy down like we did, and Switzerland (1502).
US Vaccinations: As of 02/21/22   550.0 million doses, 664,384 per day last week ( 75.4%) of population now vaccinated  with at least one shot)  and in California 99,747 per day  (which means at least 81.5% of the population of California has received at least one shot) which many believe is necessary to develop herd immunity (other than Flip Flop Fauci who may believe that 90% is required).  In California 71,044,784 total doses have been given (83.1%  of doses received to exceed the U.S. average of 80.2%), California has  moved  from 14th to 13th tied with Nevada of the 50 states in terms of the percentage of doses administered as a percentage of doses delivered to the states and at 70.1%% of its population fully vaccinated compared to the U.S. average of 64.1% and has  moved from 13th to 11th   in terms of the percentage of the population fully vaccinated compared to other states (nothing like a recall election to get Newsom’s attention and performance).
Non  CV News:  The Kremlin has indicated Russia will recognize the independence from Ukraine of the Russian speaking areas of Donetsk and Luhansk in Eastern Ukraine as the UN Security Council met in Emergency Session unfortunately to have to endure Russian lies like Ukraine was trying to seek nuclear weapons from the United States (reminiscent of Gromyko lying about the presence of nuclear missiles in Cuba revealed to the world on TV by Ambassador Henry Cabot Lodge) and the futility of any action due to Russia’s veto power even if its new found sidekick China does not join; look for Putin to start sending troops over into those regions at their request to protect them; sanctions that should have been levied when Russia started massing troops and arms on the border months ago will be announced by Biden tomorrow which will have zero effect of deterring Russian aggression; the State Department is warning Americans in Ukraine of the obvious that a Russian invasion will interfere with commercial air travel in and out of the country; Joyless Reid went ballistic over a RNC Meme that honored great presidents on Presidents’ Day but had the temerity to include only Republicans and dismiss Biden and exclude Obama during Black History Month; Bob Becker a Blue foil on The Five for many years has died at age 73, cause of death not revealed; emboldened by the Canadian Freedom Convoy, a U.S. trucker convoy headed to the Swamp to protest the cost of fuel and vaccine mandates may have plans to shut down the Beltway that surrounds Washington, D.C.; at a McDonald’s drive-thru in Midvale some 12 miles south of Salt Lake City with a 4 year old and 3 year old in the back seat when his order was not right the dad pulled a gun and when the police arrived told the 4 year old to shoot at the police which he did, slightly wounding the officer in the arm (what is this world coming to?); the Beijing Winter Olympics came to an end on Sunday and for NBC the viewing ratings have been a disaster and given the drop in viewers probably major pushback on the advertising rates the network was able to extort; Kyle Rittenhouse announced the formation of the Media Accountability Project to raise money to pursue media outlets that defame and libel especially those who convicted him before the verdict and those dumb enough like Whoopi Goldberg who claimed he was a murderer even after his acquittal (look for the charge of “fake news” to be replaced by “defamation news”; deaths of overdoses involving fentanyl have double since 2019 in 30 states and as a grim reminder of that   appalling statistic, police in Commerce, Colorado recovered fentanyl in a house that 5 died from an overdose, leaving a 4 month old the only person still alive in the house; as Canada is being treated to Trudeau’s brand of tyranny, leave it to the political cartoonist to portray the reality of his power grab which the Canadian Parliament has extended with an extension of Canada’s legislation providing for martial law: 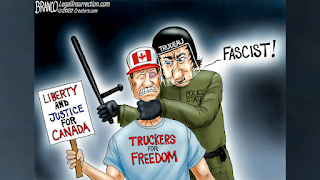 Chicago Gun Violence: Hey Jackass.com is alive and well to collect data to show that through February 20, 2022, gun violence involving mostly persons of color shooting mostly persons of color in Chicago is alive and well with 353 shot of whom 79 have died while 2021 shootings numbers compared to 2020 are 4544 to 4248 and deaths are 846 compared to 797.
As always, I hope you enjoy today’s holidays and observances, factoids of interest for this day in history, a video recording of “Hey Paula” by Paul and Paula, the fact that you view yourself as a solonist, and quote on World War I by Ernest Hemingway, secure in the knowledge that if you want to send a gift for any memorable events like Valentine’s Day or St. Patrick’s Day, college graduations, birthdays, weddings, or anniversaries, you know that the Alaskanpoet can provide you with a unique customized poem at a great price tailored to the event and the recipient. Please contact me for details on pricing.
1.   Presidents Day—celebrating the birthday of George Washington which has been a federal holiday since 1880 and celebrated since 1971 on the third Monday of February.
2.  International Mother Language  Day—created by UNESCO on November 17, 1989 to promote awareness of linguistic and cultural diversity and multilingualism.
3.  1963  Number 1 Song—the number 1 song in 1963  on this day was  “Hey Paula” by Paul and Paula on a run of 3 weeks in that position to join 20 other songs that achieved number 1 status and 18 other acts that achieved their first number one song. Here’s a video recording of Paul and Paula  performing “Hey Paula”: https://www.youtube.com/watch?v=6vOo-3XWxpo The two were a duo that performed in the mid 60’s before going their separate ways.
4.  Word of the Day—the word of the day is “solonist” which means a wise man like the man whose holiday we celebrate today.
5.  Bringing Violence Onto the Screen in Spades—celebrating the birth on this day in 1925 of Sam Peckinpah former Marine and noted director of such violent films as The Wild Bunch, Straw Dogs, The Get Away  and Cross of Iron who battled heavy drinking and drugs and died of a heart attack on December 28, 1984.
On this day in:
a. 1915 the Battle of Verdun began with the Germans attacking and when it ended on December 18, 1916 it was still in French hands with the Germans suffering 336-355,000 casualties and the French 379-400,000.
b. 1948 to the joy of auto racing fans NASCAR as incorporated.
c. 1971 the UN Treaty the Convention on Psychotropic Drugs was signed in Vienna, Austria.
d. 1972 Richard M. Nixon landed in Red China to normalize relations between the 2 nuclear powers.
e. 1995 Steven Fossett landed in Leader, Saskatchewan, becoming the first person to fly solo in a balloon across the Pacific Ocean.
Reflections on World War I battles like the carnage that occurred at Verdun: “World War I was the most colossal, murderous, mismanaged butchery that has ever taken place on Earth. Any writer who said otherwise just lied. So the writers either wrote propaganda, shut up or fought.” Ernest Hemingway, noted American writer who volunteered as a Red Cross Ambulance driver and was wounded on the Italian Front on July 8, 1918.
Please enjoy the poems on events of interest on my twitter account below (if you like them, retweet, and follow me) and follow my blogs. Always good, incisive and entertaining poems on my blogs—click on the links below. Go to www.alaskanpoet.blogspot.com for Ridley’s Believe It Or Not—This Day in History,  poems to inspire, touch, emote, elate and enjoy and poems on breaking news items of importance or go to  Ridley's Believe It Or Not for just This Day in History.

© February 21, 2022,  Michael P. Ridley aka The Alaskanpoet
Alaskanpoet for Hire, Poems to Admire
Poet Extraordinaire, Beyond Compare
A Unique Gift, All Recipients Receive a Lasting Lift

Posted by Michael P. Ridley aka the Alaskanpoet at 1:41 AM