February 9, 2022, Ridley's Believe It Or Not National Read in the Bathtub Day

RIDLEY’S BELIEVE IT OR NOT February 9, 2022
CV World Cases: The planet continues on an increasing basis with cases now over 403 million at 403,439,554 cases,  74,540,295  of which are active, 328,889,259  closed with 323,104,550 recoveries (98.24%), and nearing the 5,800,000 barrier 5,794,709 deaths (1.76% )to continue the low trend of increased cases with increased recovery percentages and decreased death percentages with some plateaus, dips, and rises.
CV USA Cases: Total cases now exceeding 78 million at 78,818,351 with 28,685,968 active cases  of which 18,160  are serious or critical, (15,517 on 12/12) (back to steady decreases despite the increase in active cases due to the relative mildness of the Omicron variant) to .063 % of active cases (back to back steady decreases despite the increase in active cases due to the relative mildness of the Omicron variant  and to increase  the reduction from the 29,271 peak on 12/31/2020 to 101,111, 50,132,383 closures with 935,824 deaths (1.86%) and with 49,196,559 recoveries (98.13%). Our death rate percentage is .10% higher than the world’s death rate.
Standing: On a deaths per million population measure on a steady but slow climb to 2801 the U.S. ranks behind Peru (6150) the new number 1 which has had a quantum leap in deaths previously unmatched which was a change in the classification to give Peru the a new method of reporting; Bulgaria the new number 2 (4975), Hungary (4383), Romania (3210),  Brazil (2955) which has been hit with a rapid rise in deaths now slowing down passed by Romania, and Poland (2829) and slightly better than Argentina (2695), newly added to the list Columbia (2636), Belgium (2522),  Italy (2485), Mexico (2364),  UK (2322), Russia (2310), Chile (2070), Spain (2035), France (2040), Portugal (2006), Ecuador newly added to list (1992),  Bolivia (1777),  Sweden (1600) that never closed its economy down like we did, and Switzerland (1486).
Tests: No need to tally tests as testing programs are functioning well but the free rapid tests which the Biden Administration was caught flatfooted on the ease of transmission of the Omicron Variant and failed to order are not yet being produced.
US Vaccinations: As of 02/9/22   544.8 million doses, 604,865 per day last week ( 75% of population now vaccinated  with at least one shot)  and in California 98,706 per day  (which means at least 80.9% of the population of California has received at least one shot) which many believe is necessary to develop herd immunity (other than Flip Flop Fauci who may believe that 90% is required).  In California 70,110,624 total doses have been given (83.4%  of doses received to exceed the U.S. average of 81.1%), California has not moved  from 13th of the 50 states in terms of the percentage of doses administered as a percentage of doses delivered to the states and at 69.5% of its population fully vaccinated compared to the U.S. average of 63.6% and has  moved from  to 12th to 10th  in terms of the percentage of the population fully vaccinated compared to other states.
Non  CV News:  Biden’s approval rating has dropped below 40% with increasing calls for him to take a cognitive test; as we are sending mere “tripwire” forces similar to those maintained in West Berlin during the Cold War whose life expectancy would be measured in hours in the event of a conflict our armed forces are being mocked for claiming that “diversity, equity and inclusions are necessities” as opposed to the ability to engage in combat and prevail; the Biden Administration has another problem brewing—the formation of “Freedom Caravans” similar to what we are seeing in Canada here in the U.S.; any concern of drugs or alcohol in Bob Saget’s death have been laid to rest with the verdict being head trauma which was reported to be so minor, Saget thought little of it and went back to sleep; outgoing Blue Rep of Tennessee who elected not to seek reelection gave a  very candid and pessimistic outlook for the party this due to not having a strategy especially for rural voters which Blue Rep Cori Bush was not listening to as she intends to run on a “Defund the Police” Platform; Pelosi whose husband has made millions in the stock market due to information obtain from his wife has changed her mind of banning stock trades by members of Congress if the same bans will apply to the members of SCOTUS (unclear whether any proposed legislation would cover spouses but the idea that members of Congress have made themselves rich by having knowledge of the issuers they regulate is an outrage; D.A. Gascon facing a recall effort for his apparent pro criminal stances has thumbed his nose at those residents concerned for their safety and has done the same thing to his Deputy D.A.s who offered him a chance to defend his policies only to have him be a no show; the Freedom Convoys in Canada totally peaceful other some honking of horns have given the MSM a platform to once again characterize the riots of 20/21 protesting police conduct as peaceful as buildings were burned down and stores looted  and the Freedom Convoys as violent as the political cartoonist so aptly displays their bias: 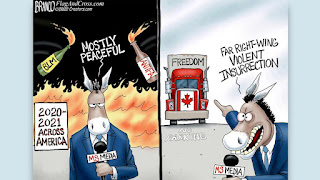 Chicago Gun Violence: Hey Jackass.com is alive and well to collect data to show that through February 7, 2022, gun violence involving mostly persons of color shooting mostly persons of color in Chicago is alive and well with 295 shot of whom 64 have died while 2021 shootings numbers compared to 2020 are 4544 to 4248 and deaths are 846 compared to 797.
As always, I hope you enjoy today’s holidays and observances, factoids of interest for this day in history,  a recording link to “Hearts of Stone” by the Fontane Sisters, the fact that you done nothing to merit a sneap; and opposing quotes by Tom McClintock and Zoe Lofgren on the second impeachment of Donald Trump, secure in the knowledge that if you want to send a gift for any memorable events like Valentine’s Day or St. Patrick’s Day, college graduations, birthdays, weddings, or anniversaries, you know that the Alaskanpoet can provide you with a unique customized poem at a great price tailored to the event and the recipient. Please contact me for details on pricing.
1.   National Read in the Bathtub Day—celebrating a great way to relax and soak your worries away by reading a favorite book and aping the Romans who has scrolls in their baths for reading especially with walk in tubs that have a chair in them which makes it much easier to read with your Nook and not ruin it by getting it wet.
2.  National Pizza Day—celebrating Americans’ favorite snack food which originated in Naples but did not spread across the separated kingdoms that would become when they united but took off when introduced by Neapolitan immigrants.
3.  1955  Number 1 Song—the number 1 song in 1955  on this day was  “Hearts of Stone” by The Fontane Sisters on a run of one week in that positions to join 10 other songs that achieved number 1 status. Here’s a recording of the Fontane Sisters  singing “Hearts of Stone”: https://www.youtube.com/watch?v=krPfRvBiNrE with a video of a bunch of couples jitterbugging to it with the women in their long skirts and men in coats and ties. The Fontane Sisters were a trio from New Jersey who performed from 1941 to 1961 and have all passed away in the early 2000’s.
4.  Word of the Day—the word of the day is “sneap” which means to reprimand or rebuke which too many of our politicians on both sides of the aisle deserve for failing to cross the aisles to address some of our pressing problems.
5.  Big Guns Don’t Trump Parents’ Anger—celebrating or bemoaning depending upon your political point of view of the  birth on this day in 1957 of Terry McAuliffe former governor of Virginia and kingpin of the Democratic party in terms of fund raising but in running for a second nonconsecutive term against Glenn Younkin was on the opposite of the growing parents’ concern over the teaching of CRT and mask mandates and school closures even stating in a televise debate that parents had not right to input what their kids were taught and saw his double digit lead evaporate and lose.
On this day in:
a. 1775 The British Parliament declared the colony of Massachusetts to be in open rebellion.
b. 1904 The Battle of Port Arthur which was commenced with a surprise attack by the Japanese on the Russian fleet moored there ended with an overwhelming victory by the Japanese and started the Russo-Japanese War.
c. 1964 the Beatles made their first television performance on The Ed Sullivan Show which was viewed by an estimated 73 million fans and Beatlemania was in full force and effect.
d. 1971 Satchel Paige became the first African American player in the Negro League to be inducted into the Major League Hall of Fame.
e. 2021 the second impeachment trial for allegedly inciting the demonstrations at the Capitol on January 6, 2021 started and ended with his acquittal.
Reflections on the second impeachment of Donald Trump from both sides of the aisle:
Rep. Tom McClintock, R-Elk Grove (Sacramento County): McClintock pushed back on claims President Trump incited the Capitol riot, saying the president simply told rowdy rally participants to march, not to commit violence. “March to the Capitol ... that’s impeachable? That’s called free speech. “If we impeached every politician who gave a fiery speech to a crowd of partisans, this capital would be deserted,” he said, adding that the real imperative is to hold the rioters accountable for their actions.
Rep. Zoe Lofgren, D-San Jose: Lofgren spoke during the impeachment debate as the only House member who has been involved in all the impeachment proceedings in recent history — of Presidents Richard Nixon, Bill Clinton and Trump. “Those were long proceedings. Today, we don’t need a long investigation to know the president incited right-wing terrorists to attack the Congress to try to overturn constitutional government. The actions were in public — plain as day. His actions are the most serious offense against our Constitution and our country. They are impeachable acts.”
Please enjoy the poems on events of interest on my twitter account below (if you like them, retweet, and follow me) and follow my blogs. Always good, incisive and entertaining poems on my blogs—click on the links below. Go to www.alaskanpoet.blogspot.com for Ridley’s Believe It Or Not—This Day in History,  poems to inspire, touch, emote, elate and enjoy and poems on breaking news items of importance or go to  Ridley's Believe It Or Not for just This Day in History.
© February 9, 2022,  Michael P. Ridley aka The Alaskanpoet
Alaskanpoet for Hire, Poems to Admire
Poet Extraordinaire, Beyond Compare
A Unique Gift, All Recipients Receive a Lasting Lift

Posted by Michael P. Ridley aka the Alaskanpoet at 11:08 PM