Februiary 15, 2022 Ridley's Believe It Or Not Remember the Maine Day

Belgium (2547), Italy (2508), Mexico (2386), Russia (2339), UK (2331), Chile (2100), Spain (2065), France (2064), Portugal (2032), Ecuador (1940),  Bolivia (1786),  Sweden (1622) that never closed its economy down like we did, and Switzerland (1495).
US Vaccinations: As of 02/15/22   547.5 million doses, 520,463 per day last week ( 75.2% of population now vaccinated  with at least one shot)  and in California 82,660 per day  (which means at least 81.2% of the population of California has received at least one shot) which many believe is necessary to develop herd immunity (other than Flip Flop Fauci who may believe that 90% is required).  In California 70,535,116 total doses have been given (83.6%  of doses received to exceed the U.S. average of 81%), California has  moved  from 13th to 14th of the 50 states in terms of the percentage of doses administered as a percentage of doses delivered to the states and at 69.8% of its population fully vaccinated compared to the U.S. average of 63.8% and has  moved from  10th to 9th  in terms of the percentage of the population fully vaccinated compared to other states.
Non  CV News:  the MSM other than surprisingly CNN which devoted a little over 2 minutes to John Durham’s revelations of Clinton financed hacking of Trump Tower and the White House after Trump’s elections have gone silent as the probe is picking up steam with more witnesses going before grand juries; disgraced Prince Andrew has settled for an undisclosed sum the sexual abuse claims brought by Virginia Giuffre while lured to Epstein’s island by the Lolita Express; Assamad Nash who had been arrested 12 times since 2012 and released on bail on 4 pending criminal cases has been arrested again for the stabbing murder of Christina Yuna Lee in her apartment (let’s hope that D.A. Bragg is not tone deaf to the outrage and frustration of residents of the Big Apple and he denies bail to Nash); teachers unions in Indiana are predicting a large exodus of teachers in the public schools if a bill passed by the Indiana House and pending in the Senate which curtails the teaching of CRT and grants parental oversight is passed (parents in support of the bill probably are arguing that if a teacher is so biased as to implement CRT in the classroom “good riddance”; Quintez Brown a BLM gun control activist and socialist has been arrested for the attempted assassination  of Louisville, Kentucky mayoral candidate Craig Greenberg, a Jewish Democrat; in announcing to the world that the U.S. will not send troops to Ukraine, like the Truman Administration announcing that South Korea was not in the U.S’s sphere of interest giving the North Koreans a green light to launch an invasion, Biden has given a given a green light to Putin to invade; Biden’s pick to head the FDA Dr. Robert Califf who headed the FDA in the year preceding Trump’s inauguration was approved 50-46 with as 6 Reds crossed the line to support him while 4 Blues and Sanders voted against him ( maybe a hopeful sign that compromise no matter how slender the thread still exists in the Swamp?); the Los Angeles Times Op-Ed by its Editorial Board argued that removing the mask mandate in public schools was premature evidently dismissing the evidence of damage to emotional and cognitive development mandatory mask wearing has inflicted on elementary school students; Hillary was asked directly by a Daily Mirror reporter “When will you comment on allegations you spied on the Trump campaign” which prompted a wave and a walk away ( this may finally be on the Clintons “a Crime Too Far”; Mayor Adams a little testy that not enough reporters that look like him; with Zucker gone the lust may be gone also as Alison Gollust resigned from CNN; with violent crimes and murders off the charts in Blue run states and cities, suffering and fearful residents easily come to the conclusion that Blue leaders in Minnesota can’t be concerned about crime as the political cartoonist captures how Blues feel about crime: 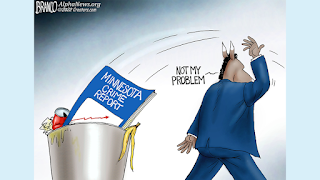 Chicago Gun Violence: Hey Jackass.com is alive and well to collect data to show that through February 13, 2022, gun violence involving  mostly persons of color shooting mostly persons of color in Chicago is alive and well with 313 shot of whom 70 have died while 2021 shootings numbers compared to 2020 are 4544 to 4248 and deaths are 846 compared to 797.
As always, I hope you enjoy today’s holidays and observances, factoids of interest for this day in history, a video recording link to “Too Much” by Elvis Presley, the fact that if you have a sobriquet, you happy with it; and a quote on the NAACP by Rep. Burgess Owens, secure in the knowledge that if you want to send a gift for any memorable events like Valentine’s Day or St. Patrick’s Day, college graduations, birthdays, weddings, or anniversaries, you know that the Alaskanpoet can provide you with a unique customized poem at a great price tailored to the event and the recipient. Please contact me for details on pricing.
1.   Susan B. Anthony Day—celebrating the birth on this day in 1820 of Susan B. Anthony, noted abolitionist, prohibitionist and suffragist who in her struggles to obtain voting rights for women became one of the first national women leaders and although she died March 13, 1906 before the 19th Amendment gave women the right to vote, the 19th is known as the “Susan B. Anthony Amendment.”
2.  Remember the Maine Day—commemorating  the sinking of the American battleship the USS Maine in Havana harbor on this day in 1898 which occurred quickly after 2 massive explosions rocked the ship, killing some 266 sailors. The American press claimed the sinking was caused by a mine or torpedo released by the Spanish and demanded war which was declared on April 26, 1898 which ended in a quick American victory with the signing of a peace treaty in Paris on December 10, 1998 granting the Philippines, Puerto Rico and Guam to the U.S. In 1976 Admiral Rickover of nuclear submarine fame started an investigation which concluded the explosions were not caused by Spanish mines or torpedoes but fire that started in one of the ship’s coal bunkers
3.  1959  Number 1 Song—the number 1 song in 1959  on this day was  “Stagger Lee” by Lloyd Price on a run of 4 weeks in that position to join 14 other songs that achieved number 1 status and 8 other acts that achieved their first number one song. Here’s a recording of Lloyd Price singing “Stagger Lee”:  https://www.youtube.com/watch?v=FCPutYaGFlE Price was a rock n’ roll and  R&B singer who started performing in 1952, was known in the business as “Mr. Personality” and a successful entrepreneur and after a career that spanned from 1952 to 2019 died on May 3, 2021 at age 88 from diabetes.
4.  Word of the Day—the word of the day is “solecism” which means a breach of manners or good etiquette which is harder to point out as proper manners or good etiquette are endangered social traits.
5.  Deadly One Two Punch—celebrating the birth on this day in 1964 of noted comedian, SNL performer for 5 years and actor but who struggled with the combination of obesity and drug addiction and who left us from a speedball overdose on December 18, 1997 at age 33.
On this day in:
a. 1879 President Rutherford Hayes signed legislation that would allow women lawyers to argue cases before SCOTUS.
b. 1942 following an assault by outnumbered Japanese troops, General Percival surrendered the 80,000 British and Commonwealth troops to the Japanese troops in the largest surrender in British military history.
c. 1972 to the financial joy of singers and musicians, sound recordings were grant copyright protection under the U.S. Copyright Laws.
d. 1992 serial killer and sexual abused Jeffrey Dahmer was convicted of 15 murders and sentence 2 days later to life in prison for each murder but his time in prison would be shortened by a fellow inmate Christian Scarver who beat him to death with a metal pipe he had removed from the weight room on November 28, 1994.
e. 2003 protests against the Iraq War started by the U.S. led coalition to find weapons of mass destruction that did not exist were held in over 600 cities around the globe with some 30 million participating in the largest anti-war protest ever held.
Reflections on his crimes by Jeffrey Dahmer: “If I was killed in prison. That would be a blessing right now” He received what he wished for in a little more than 2 years.
Please enjoy the poems on events of interest on my twitter account below (if you like them, retweet, and follow me) and follow my blogs. Always good, incisive and entertaining poems on my blogs—click on the links below. Go to www.alaskanpoet.blogspot.com for Ridley’s Believe It Or Not—This Day in History,  poems to inspire, touch, emote, elate and enjoy and poems on breaking news items of importance or go to  Ridley's Believe It Or Not for just This Day in History.

© February 15, 2022,  Michael P. Ridley aka The Alaskanpoet
Alaskanpoet for Hire, Poems to Admire
Poet Extraordinaire, Beyond Compare
A Unique Gift, All Recipients Receive a Lasting Lift