February 23, 2022 Ridley's Believe It Or Not Curling Is Cool Day

CV World Cases: The planet continues on an increasing basis with cases now over 430 million at 430,113,015 cases,  65,658,070 of which are active, 364,454,945 closed with 358,518,510 recoveries (98.37%), and passing the 5,900,000 barrier 5,936,435 deaths (1.63% )to continue the low trend of increased cases with increased recovery percentages and decreased death percentages with some plateaus, dips, and rises.
CV USA Cases: Total cases now passing 80 million at 80,372,404 with 26,952,312 active cases  of which 10,011  are serious or critical, (15,517 on 12/12) (back to steady decreases despite the increase in active cases due to the relative mildness of the Omicron variant) to .037 % of active cases (back to back steady decreases despite the increase in active cases due to the relative mildness of the Omicron variant  and to increase  the reduction from the 29,271 peak on 12/31/2020 to 18,871, 53,420,092 closures with 966,530 deaths (1.81%) and with 52,453,562 recoveries (98.19%). Our death rate percentage is .18%  higher than the world’s death rate.
Standing: On a deaths per million population measure on a steady but slow climb to 2892 the U.S. ranks behind Peru (6221) the new number 1 which has had a quantum leap in deaths previously unmatched which was a change in the classification to give Peru the a new method of reporting; Bulgaria (5144), Hungary (4528), Romania (3309),  Brazil (3006), and Poland (2925) and slightly higher than Argentina (2742), Columbia (2672), Belgium (2574), Italy (2549), Mexico (2416), Russia (2382), UK (2351), Chile (2144), Spain (2115), France (2099), Portugal (2062), Ecuador (1945),  Bolivia (1794),  Sweden (1656) that never closed its economy down like we did, and Switzerland (1506).
US Vaccinations: As of 02/23/22   551.4 million doses, 623,307 per day last week ( 75.5%) of population now vaccinated  with at least one shot)  and in California 93,913 per day  (which means at least 81.6% of the population of California has received at least one shot) which many believe is necessary to develop herd immunity (other than Flip Flop Fauci who may believe that 90% is required).  In California 71,246,249 total doses have been given (83.2%  of doses received to exceed the U.S. average of 80.3%), California has  moved  from 11th tied will Illinois to 13th tied with Nevada  of the 50 states in terms of the percentage of doses administered as a percentage of doses delivered to the states and at 70.2%% of its population fully vaccinated compared to the U.S. average of 64.2 and has moved from 11th to 12th  in terms of the percentage of the population fully vaccinated compared to other states (nothing like a recall election to get Newsom’s attention and performance).
Non  CV News:  Russian troops and tanks have crossed into Ukraine with Russian Marines coming ashore in Odessa and missile explosions are being heard across the country ( Russian intentions of how far it intends to invade not yet known and the U.S. is supposedly rushing additional weapons to the  country); in response to the invasion Ukraine has declared martial law in the country; Russian media is promoting the narrative that occupation of the country is not the goal only its demilitarization; Biden has announced ‘crippling financial  sanctions’ against Russia, Putin and his oligarchs (jury is out on how effective of a deterrent this sanctions will be); although the support for Ukraine is widespread and bipartisan, Blue Rep. Ruben Gallego is blaming Obama’s sowing the seeds for this war on Obama for his indication during his term that we did not have a vital interest in protecting Ukraine (sounds very similar to our State Department indicating that South Korea was not in our sphere of influence which was quickly followed by a full scale invasion from North Korea, launching the Korean War); Trudeau after quelling the Freedom Convoy protests and freezing the bank accounts of those who contributed to the protests announced that he is cancelling the emergency powers granted to him under the Emergencies Act; NPR Political Podcast is looking less like National Public Radio but more like National Propaganda Radio as its podcast excoriated parents who were protesting mask mandates as “angry” and “not rational”; Joyless Reid has climbed to new heights of over the top rhetoric claiming the Reds want to install a Christian Autocracy without the need for elections; the two top prosecutors in Manhattan have resigned from their investigation of the business dealings of Trump; Colin Kaepernick is back in the spotlight offering free autopsies to families who have had a relative killed in a police involved shooting; Biden has often been accused by friend and foe alike of leading from behind but leave it to the political cartoonist to portray what happens when one embraces that strategy: 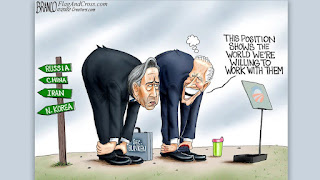 Chicago Gun Violence: Hey Jackass.com is alive and well to collect data to show that through February 22, 2022, gun violence involving mostly persons of color shooting mostly persons of color in Chicago is alive and well with 370 shot of whom 81 have died while 2021 shootings numbers compared to 2020 are 4544 to 4248 and deaths are 846 compared to 797.
As always, I hope you enjoy today’s holidays and observances, factoids of interest for this day in history, a recording of “This Diamond Ring” by Gary Lewis and the Players, the fact that to the best of your knowledge you do not suffer from somniloquence; and quote on the dioxin contamination of Times Beach by Marilyn Leistner, secure in the knowledge that if you want to send a gift for any memorable events like Valentine’s Day or St. Patrick’s Day, college graduations, birthdays, weddings, or anniversaries, you know that the Alaskanpoet can provide you with a unique customized poem at a great price tailored to the event and the recipient. Please contact me for details on pricing.
1.   Curling Is Cool Day—celebrating the sport of curling which has been around since the 14th Century and was an official Winter Olympic Sport in the first Winter Olympics in 1924 to be discontinued and become off and on a demonstration sport until it became an Official Winter Olympic Sport in 1998. Given the strategy of trying to shield  stones in scoring position from being knocked out of scoring position the game has been called “Chess of Ice.”
2.  National Banana Nut Bread—bananas were introduced to the American palate in the 1870’s and quickly became popular and banana nut bread was a godsend way to use bananas that had stared to spoil by ripening—to liven up the bread, mix berries or honey in the batter.
3.  1965  Number 1 Song—the number 1 song in 1965  on this day was  “This Diamond Ring” by Gary Lewis and the Playboys on a run at that position for 2 weeks  to join 26 other number 1 songs (5 of which were by the Beatles down from 6 in 1964) and 13 other acts that hit the charts at Number 1 for the first time. Here is a recording of the group performing “This Diamond Ring”:  https://www.youtube.com/watch?v=bKTOizdhan8 This 5-man 1960’s pop band led by the son of Jerry Lewis folded in 1970.

4.  Word of the Day—the word of the day is “somniloquence” which means of or pertaining to talking in one’s sleep raising the question of whether a person who suffers from stuttering do so when talking in his or her sleep.
5.  Comebacks Are a Two Edged Sword—celebrating the birth on this day in 1940 of Jackie Smith, 15 season Pro Bowl tight end with the St. Louis Cardinals who retired at the end of the 1977 season but was persuaded to comeback by the Dallas Cowboys in September, 1978 due to an injury to one of the team’s starting tight ends and play the entire regular season as a blocking tight end in goal line situations but showed his past reception skills by catching 3 passes, 1 of which was a touchdown to enable a comeback win and a trip to the Superbowl where he will be most remembered by with the Cowboys trailing he dropped a third down Roger Staubach touchdown pass in the end zone forcing the Cowboys to settle for a field goal and ultimately lose the game. Still alive today as one of the 16 gay players who have played in the NFL.
On this day in:
a. 1903 Cuba leased 45 square miles of land in Guantanamo Bay to the United States “in perpetuity.” The site still hosts a a naval base which is the oldest base outside the United States and is the prison home to a dwindling number of foreign terrorists which Biden is vowing to close before he leaves office.
b. 1954 to the joy of parents everywhere, the mass inoculations of children with the Salk Polio vaccine began in Pittsburgh.
c. 1974 the Symbionese Liberation Army demanded the payment of a $4 million ransom for the release of Patty Hearst which was not paid and she was subsequently arrested 19 months later for crimes committed by her while she was with them.
d. 1983 the Environmental Protection Agency announced its intention to buy out and remove the dioxin-contaminated community of Times Beach, Missouri.
e. 2020 African-American Ahmaud Arbery while jogging near Brunswick, Georgia was shot and killed by 3 white men of whom the father and son were convicted of murder and sentenced to life without possibility of parole plus 20 years and the third who recorded the shooting life with possibility of parole after 30 years. In the federal hate crime trial that followed has just resulted in the 3 being convicted and they are awaiting sentencing.
Reflections on the dioxin contamination and Times Beach: “To say that dioxin has never caused anything—I saw it wipe out a whole community. I saw people that lived in the community lose their jobs, their churches, their homes, health problems. You can’t tell me dioxin has never caused anything.” Marilyn Leistner, last mayor of Times Beach who fought tooth and nail to get the EPA to investigate the contamination and force a buyout of the residents under the Superfund.
Please enjoy the poems on events of interest on my twitter account below (if you like them, retweet, and follow me) and follow my blogs. Always good, incisive and entertaining poems on my blogs—click on the links below. Go to www.alaskanpoet.blogspot.com for Ridley’s Believe It Or Not—This Day in History,  poems to inspire, touch, emote, elate and enjoy and poems on breaking news items of importance or go to  Ridley's Believe It Or Not for just This Day in History.

© February 23, 2022,  Michael P. Ridley aka The Alaskanpoet
Alaskanpoet for Hire, Poems to Admire
Poet Extraordinaire, Beyond Compare
A Unique Gift, All Recipients Receive a Lasting Lift

Posted by Michael P. Ridley aka the Alaskanpoet at 5:21 PM