February 14, 2014 Ridley's Believe It Or Not Valentines Day

RIDLEY’S BELIEVE IT OR NOT February 14, 2022
CV World Cases: The planet continues on an increasing basis with cases now over 420 million at 420,962,050 cases,  81,191,988 of which are active, 339,770,052  closed with 333,868,375 recoveries (98.26%), and passing the 5,900,000 barrier 5,901,677 deaths (1.74% )to continue the low trend of increased cases with increased recovery percentages and decreased death percentages with some plateaus, dips, and rises.
CV USA Cases: Total cases now exceeding 79 million at 79,341,465 with 28,545,280 active cases  of which 15,740  are serious or critical, (15,517 on 12/12) (back to steady decreases despite the increase in active cases due to the relative mildness of the Omicron variant) to .055 % of active cases (back to back steady decreases despite the increase in active cases due to the relative mildness of the Omicron variant  and to increase  the reduction from the 29,271 peak on 12/31/2020 to 13,531, 50,796,185 closures with 943,621 deaths (1.86%) and with 49,852,564 recoveries (98.14%). Our death rate percentage is .10% higher than the world’s death rate.
Standing: On a deaths per million population measure on a steady but slow climb to 2824 the U.S. ranks behind Peru (6181) the new number 1 which has had a quantum leap in deaths previously unmatched which was a change in the classification to give Peru the a new method of reporting; Bulgaria (5012), Hungary (4431), Spain (3412), Romania (3221),  Brazil (2969), and Poland (2862) and slightly higher than Argentina (2705),Columbia (2649), Belgium (2538),  Italy (2508), Mexico (2386), Russia (2335), UK (2331), Chile (2098), France (2058), Spain (2052), Portugal (2026), Ecuador newly added to list (1928),  Bolivia (1784),  Sweden (1614) that never closed its economy down like we did, and Switzerland (1492).
US Vaccinations: As of 02/14/22   547.2 million doses, 564,985 per day last week ( 75.2% of population now vaccinated  with at least one shot)  and in California 79,220 per day  (which means at least 81.2% of the population of California has received at least one shot) which many believe is necessary to develop herd immunity (other than Flip Flop Fauci who may believe that 90% is required).  In California 70,461,977 total doses have been given (83.5%  of doses received to exceed the U.S. average of 81%), California has  moved  from 14th to 13th  of the 50 states in terms of the percentage of doses administered as a percentage of doses delivered to the states and at 69.7% of its population fully vaccinated compared to the U.S. average of 63.8% and has  moved from  11th to 10th in terms of the percentage of the population fully vaccinated compared to other states.
Non  CV News:  John Durham’s probe of the origin of the Russian influence in the 2016 has been moving forward slowly without publicity but gaining traction as reports surfaced that Clinton’s campaign paid hackers to hack into Trump Tower servers and later servers at the White House to create a narrative of Trump Russia collusion (would be amazing if more evidence of Clinton involvement in spreading the false narrative of Trump involvement with the Russian days before she is to speak before the New York Democratic Convention); the MSM which scoffed and ridiculed Trump’s allegations spying and hacking into his campaign as defuncted “conspiracy theories” has gone silent with respect to Durham’s revelations on Clinton’s hacking of servers and the White House has refused to respond to questions from the press; report that the judge in Sarah Palin’s defamation case against the New York Times for defamation in an editorial linking her to the mass shooting in Arizona that killed 6 people and wounded Rep. Gabby Gifford will dismiss the case after the jury returns a verdict (sounds like an Alice in Wonderland result); AOC is back in the news ranting that we will not be a democracy in 10 years and will return to the Jim Crow laws of the past (she may be close with revelations the CIA is snooping big time on the communications of Americans but the threat is from the left not the right); white players in the NBA are an endangered species who just got more endangered as Boston Celtics China critic Freedom Kanter who was just traded to the Houston Rockets to beat the NBA trading deadline was just released (a reflection on his skill or his views on Chinese human rights violations?); despite the cold and snow, shootings in NYC doubled last week raising doubt whether the former police captain mayor will be more successful than Bill DeBlasio in facing crime; the Rams won Super Bowl LVI in a thrilling game with the Bengals unable to score a tying field goal in the closing seconds (the commercials were second rate and the hip hop half time show criticized for having its once white performer Eminem kneel but no reference to Colin Kaepernick);  reading, writing and hypocrisy still reign in teachers unions including the California Teachers Union whose board member Jesse Aguilar was photo’d in the stands at SoFi Stadium during the NFC Championship Game; game; avian flu has been detected in Kentucky and Virginia after 29,000 turkeys infected in Indiana were culled out and slaughtered (just what we don’t need is another epidemic that would decimate poultry and add to inflation); with Americans suffering under higher inflation and a host of other problems leave it to the political cartoonist to portray the Biden’s empty promises and achievement on this Valentine’s Day: 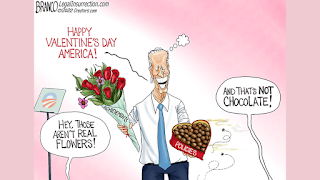 Chicago Gun Violence: Hey Jackass.com is alive and well to collect data to show that through February 13, 2022, gun violence involving mostly persons of color shooting mostly persons of color in Chicago is alive and well with 311 shot of whom 70 have died while 2021 shootings numbers compared to 2020 are 4544 to 4248 and deaths are 846 compared to 797.
As always, I hope you enjoy today’s holidays and observances, factoids of interest for this day in history, a video recording link to “Don't" by Elvis Presley, the fact that your laundry section is well stocked with detergent to prevent soilure; and a quote on loss of social media privacy by Yuval Noah Harari, secure in the knowledge that if you want to send a gift for any memorable events like Valentine's Day or St. Patrick's Day, college graduations, birthdays, weddings or anniversaries, you know that the Alaskanpoet can provide you with a unique customized poem at a great price tailored to the event and the recipient. Please contact me for details on pricing.
1.   Valentines Day—originally a Catholic feast day for St. Valentine, a Catholic priest in Rome who was martyred in 269 and was canonized in 469 to over time fade away from the feasts to him to become the day for romance it is today starting with the first reference to it as such by Geoffrey Chaucer who wrote a poem Parlement of Foules in 1382 to commemorate the anniversary of the engagement of King Richard II to Ann of Bohemia with these words (modernized): “For this was on St. Valentine’s Day where every bird cometh there to choose his mate.”  By 1400 the day was being celebrated in the king’s palace in France and the first Valentines Day card appeared in 1415 and by the 1800’s on this day people were exchanging flowers, candy and cards and has grown today to become a very celebrated and costly event with all manner of gifts bestowed on valentines.
2.  National Organ Donor Day—created by Saturn Corporation to promote the donation of life saving and quality of life improving organs from victims of accidents, diseases and crimes.
3.  1958  Number 1 Song—the number 1 song in 1958  on this day was  “Don’t” by Elvis Presley on a run of 5 weeks in that position to join 16 other songs that achieved number 1 status. Here’s a recording of Elvis Presley singing “Don’t”:   https://www.youtube.com/watch?v=T_IEho5uedM.
4.  Word of the Day—the word of the day is “soilure” which means the condition of being soiled which small children while playing outsides with great proclivity.
5.  Fast But Not Fast Enough for a Speeding Bullet—celebrating the birth on this day in 1973 of noted quarterback Stephen McNair who played for 13 years and missed a Superbowl ring in 1999 when a completed pass as time ran out against the Rams to a receiver who could not cross the goal line but whose life came to a tragic on July 4, 2009 when he was shot by Sahel "Jenni" Kazemi, in a condominium rented by McNair in downtown Nashville. who then committed suicide.
On this day in:
a. 1924 The Computing-Tabulating-Recording Company was renamed IBM Corporation.
b. 1929 on Saint Valentine’s Day in Chicago 7 men, 6 of whom are rivals of Al Capone, were murdered in a garage.
c. 1989 Union Carbide agreed to pay India $489 million for the Bhopal chemical spill disaster that killed thousands and injured hundreds of thousands more.
d. 1989 in an example of intolerance Iran‘s leader Ruhollah Khomeini issued a fatwa i encouraging Muslims to kill Salman Rushdie, the author of The Satanic Verses.
e. 2005 You Tube was launched by three college students to be  quickly acquired by Google to become the most viewed viral videos web site and the main source of viral videos.
Reflections on the use of YouTube: “ There is a saying that if you get something for free, you should know that you're the product. It was never more true than in the case of Facebook and Gmail and YouTube. You get free social-media services, and you get free funny cat videos. In exchange, you give up the most valuable asset you have, which is your personal data.” Yuval Noah Harari
Please enjoy the poems on events of interest on my twitter account below (if you like them, retweet, and follow me) and follow my blogs. Always good, incisive and entertaining poems on my blogs—click on the links below. Go to www.alaskanpoet.blogspot.com for Ridley’s Believe It Or Not—This Day in History,  poems to inspire, touch, emote, elate and enjoy and poems on breaking news items of importance or go to  Ridley's Believe It Or Not for just This Day in History.

© February 14, 2022,  Michael P. Ridley aka The Alaskanpoet
Alaskanpoet for Hire, Poems to Admire
Poet Extraordinaire, Beyond Compare
A Unique Gift, All Recipients Receive a Lasting Lift

Posted by Michael P. Ridley aka the Alaskanpoet at 1:23 AM