Ridley's Believe It Or Not May 5 History Cinco de Mayo

Ridley’s Believe It Or Not—May 5, 2015 Trust your Cinco De Mayo is proving to be a great one (what better time to celebrate Taco Tuesday than on Cinco De Mayo) If you are rattled by the difficulties inherent in waiting to the last moment in picking out the appropriate Mothers’ Day gift which (see below) is easy to solve. As always, I  hope you enjoy the holidays and observances, factoids of interest, a music video of (I Just) Died in Your Arms and  relevant quotes from unknown sources on Cinco de Mayo, having enjoyed a dozen oysters, blessed  with a positive attitude even though you know you will have to wade through tons of spam in your inbox, and secure in the knowledge that if you want to find a gift for any memorable event like Mothers’ Day, birthdays, weddings, or anniversaries, you know that the Alaskanpoet can provide you with a unique customized poem at a great price tailored to the event and the recipient. You need only contact me for details.
1. Cinco de Mayo—celebrating the victory by Mexican forces outnumbered 2 to 1 over the French in the battle of Puebla in 1862. Cinco de Mayo is not a national holiday in Mexico although the schools are closed but has been celebrated in California since 1863 and took off in terms of celebrants in the 1940’s with the Chicano movement. In the 50’s and 60’s the holiday began spreading to other states and once the beer companies got off the wagon so to speak in the 80’s Cinco de Mayo has become a major celebration rivaling St. Patrick’s Day in terms of beer consumption and celebrants. 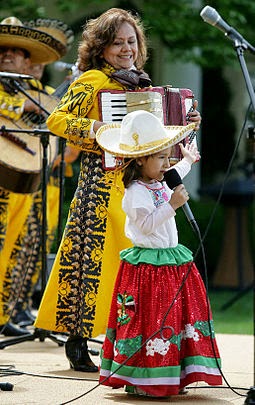 Cinco de May performers at the White House, date unknown.

2.  International Midwives Day— commemorating since 1991 the contributions of midwives in primarily developing countries to aid in the delivery of babies where doctors and nurses are often in short supply.
3. 1987 Number One Song—celebrating the number one song in 1987 on a two  week run (I Just) Died in Your Arms by Cutting Crew, an English pop band formed in 1985 with some commercial success on both sides of the Atlantic.  Here is a link to a music video of Cutting Crew performing a musical video of (I Just) Died in Your Arms).
4. National Oyster Day—celebrating a great mollusk and reputed aphrodisiac; kill two birds with one pearl of advice so to speak—enjoy a dozen oysters with horseradish on the half shell for lunch then buy a string of pearls for the woman loved on the way home. Not sure which will work best, the oysters or the pearls but the combo should be irresistible.
5. A Google Doodle Merits a Note--celebrating the birthday on this day in 1864 of Nelly Bly, a pioneer investigative journalist who emulated Jules Verne’s Around the World in 80 Days by doing it in 72 and faked insanity to be committed to be able to write an expose of the horrors of treatment facilities for the insane, but at age 31 married a millionaire industrialist Robert Seaman aged 73 and ran his company after his death.
6. Poem in a Pillow Day—a celebration started today for the first time  by Tweetspeak, the best in poetry and other things. Not sure what kind of legs this day will have but if beer companies can energize Cinco de Mayo maybe this company can energize poetry.
On this day in
a. 1866 Memorial Day was celebrated for the first time at Waterloo, Iowa.
b. 1901 Music Hall (later known as Carnegie Hall) opened for its first performance with Tchaikovsky as its guest conductor.
c. 1934 the first Three Stodges short Woman Haters was released.
d. 1977 the first of the Nixon Interviews between David Frost and Richard Nixon were broadcast.
e. 2010 mass protests erupted in Greece in response to the austerity programs instituted by the government as a result of the Greece debt crisis; Greece the financial basket case of Europe is a preview of what will happen to us if we do not get our our rapidly expanding national debt under control.
Whimsical reflections from partgoers probably seen on Water’s World later today celebrating Cinco de Mayo;

"Is it really necessary to adopt another country's holiday just to have an excuse to drink tequila? You don't need one the other 364 days of the year.”
“Cinco de Mayo makes me long for a world in which all holidays are conveniently named after the dates on which they fall.”
“Contrary to popular belief, Cinco de Mayo is Spanish for ‘the fifth of May’ and not ‘chug, chug, chug, chug, chug.’ Anyway, salud!” Enjoy the party but as Dos Equis pleads, “Drink responsibly.”
Please enjoy the 140 character poems on events of interest on my twitter account below (if you like them, retweet and join 158 growing followers and please follow me) and follow my blogs. Always good, incisive and entertaining poems on my blogs—click on the links below. Go to www.alaskanpoet.blogspot.com for Ridley’s Believe It Or Not—This Day In History, poems to inspire, touch, emote, elate and enjoy and poems on breaking news items of importance. Go to Rhymes On The Newsworthy Times for comments on important and breaking news events that should be of interest. www.alaskanpoet.blogspot.com Ridley's Believe It Or Not  Rhymes On The Newsworthy Times © May 5 , 2015 Michael P. Ridley aka the Alaskanpoet
Alaskanpoet for Hire, Poems to Admire
Poet Extraordinaire Beyond Compare
Rhymes for All the Memorable Times
The Perfect gift, All Recipients to Receive a Lasting lift


Posted by Michael P. Ridley aka the Alaskanpoet at 12:59 PM