CV World Cases: The planet continues with cases still increasing but the increase slowing down with cases now passing 473 million at 473,334,154 cases,  57,757,995 of which are active, 415,576,159 closed with 409,467,625 recoveries (98.53%), and crossing the 6,000,000 barrier 6,108,534 deaths (1.47% )to continue the low trend of increased cases with increased recovery percentages and decreased death percentages with some plateaus, dips, and rises.
CV USA Cases: Total cases now passing 81 million at 81,454,852 with 17,182,509 active cases  of which 3016 are serious or critical, (15,517 on 12/12) (back to steady decreases despite the increase in active cases due to the relative mildness of the Omicron variant) to .0176% of active cases (back to back steady decreases despite the increase in active cases due to the relative mildness of the Omicron variant  and to increase  the reduction from the 29,271 peak on 12/31/2020 to 26,255 with 64,272,343 closures with 999,160 deaths (1.55%) and with 63,273,183  recoveries (98.45%). Our death rate percentage is .08%  higher than the world’s death rate.
Standing: On a deaths per million population measure on a steady but slowing climb to 2989 the U.S. ranks behind Peru (6277) the new number 1 which has had a quantum leap in deaths previously unmatched which was a change in the classification to give Peru the a new method of reporting; Bulgaria (5297), Hungary (4693), Romania (3405),  Brazil (3055), and Poland (3027) and slightly higher than Argentina (2780), Columbia (2692), Belgium (2619), Italy (2622), Russia (2502), Mexico (2454), UK (2393), Chile (2300), Spain (2181), France (2153), Portugal (2110), Ecuador (1956),  Bolivia (1798),  Sweden (1765) that never closed its economy down like we did, and Switzerland (1551).
US Vaccinations: As of 03/21/22   558.7 million doses, 245,845 per day last week (76.1%) of population now vaccinated  with at least one shot)  and in California 39,075 per day  (which means at least 82.3% of the population of California has received at least one shot) which many believe is necessary to develop herd immunity (other than Flip Flop Fauci who may believe that 90% is required).  In California 72,375,870 total doses have been given (83.3%  of doses received to exceed the U.S. average of 80.1%), California is still stuck at 12th  of the 50 states in terms of the percentage of doses administered as a percentage of doses delivered to the states and at 70.9% of its population fully vaccinated compared to the U.S. average of 64.8% and has  moved from 13th  to 12th  in terms of the percentage of the population fully vaccinated compared to other states (nothing like a recall election to get Newsom’s attention and performance).
Non  CV News: The war in Ukraine continues with Russians making little if any progress in advancing while Ukrainians are believed to be counterattacking as the Russian continue to wage deadly missile and air attacks and shelling on civilian targets (Secretary of Defense used the term “wood chipper” to describe what Putin was pushing his troops into); Judge Ketanji Jackson Brown is in her second day of testimony with Blues heaping praise and Reds grilling her over some of her sentencing decisions on child pornography and teaching CRT in elementary school but walking on egg shells to avoid being charged with racism; Russian dissident Alexi Navalny has been charging Putin with war crimes in Ukraine and has been sentenced to another 9 years in prison; in a possible explanation of Putin’s dissatisfaction of Russian performance, news out that Russian spies sent into Ukraine prior to the invasion to spy on Ukraine military dispositions have been put under house arrest; MSNBC co-host Mehdi Hasan slammed Blue Rep from New York Sean Maloney who is chair of the DCCC for wanting to end mask mandates (watch the Blues fearful of losing seats shed their proclivity for mask mandates like a person with a bad case of dandruff; HRC announced she has tested positive for COVID-19 as has Jen Psaki who will miss Biden’s trip to Europe to confer with NATO members; the public school Woke Warriors in Eau Claire, Wisconsin are requiring that parents have to “earn” the right to know their child’s sexual identity; NBC op-ed compared transgender Lia Thomas to Jackie Robinson as a trailblazer (transgender male competing against biological females is no different from person using performance enhancing drugs unfairly competing against someone who does not); 1619 Project warrior Nikole Hannah-Jones is off the wall again tweeting that tipping is a legacy of slavery and then realizing the idiocy of such claim deleting it but not before a screen shot was made to preserve her stupidity; Disney is in the cross hairs again for its complicity in genocide against the Uyghurs and for not taking a position against Florida’s ban on teaching sexual identity until after 3rd grade; in a Britney Spears déjà vu actress Amanda Byne was successful in getting her conservatorship which was put in place in 2013 at age 28 ended; after 5 people were shoot in 2 separate incidents, Miami Beach has imposed a curfew for this weekend to try to curb the violence; it looks like Biden is hell bent to restart the Iran nuclear program with the political cartoonist portraying the dangers and the use of American money to aid Ira n in its deadly endeavors: 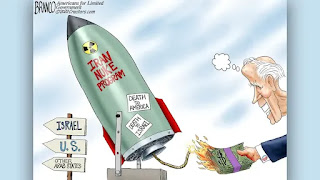 Chicago Gun Violence: Hey Jackass.com is alive and well to collect data to show that through March 21,  2022, gun violence involving mostly persons of color shooting mostly persons of color in Chicago is alive and well with 564 shot of whom 109 have died.
As always, I hope you enjoy today’s holidays and observances, factoids of interest for this day in history, a video recording of “Can’t Fight This Feeling” by REO Speedwagon; the fact that you oppose speakers whose presentations are spinach; and a quote by William Shatner on his trip into space, secure in the knowledge that if you want to send a gift for any memorable events like St. Patrick’s Day, Mothers’ Day, college graduations, birthdays, weddings, or anniversaries, you know that the Alaskanpoet can provide you with a unique customized poem at a great price tailored to the event and the recipient. Please contact me for details on pricing.
1.  World Water Day—created by the UN in 1993 to promote awareness of the need for sustainable fresh water sources.
2.  American Diabetes Association Alert Day—created by American Diabetes Association in 1988 and celebrated on the 4th Tuesday in March to create awareness of the risk factors for Type II Diabetes and promote lifestyle changes to avoid the risk of the disease.
3.  1985  Number 1 Song—the number 1 song in 1985  on this day was  “Can’t Fight This Feeling” by REO Speedwagon in that position for 3 weeks to join 26 other number 1 songs while 17 acts hit the charts at Number 1 for the first time. Here is a video recording of REO Speedwagon performing “Can’t Fight This Feeling”: https://www.youtube.com/watch?v=zpOULjyy-n8 REO Speedwagon is an American pop rock band formed in Champaign, Illinois that enjoyed commercial success in the 70’s and 80’s having 13 top 40 hits and selling some 40 million records and is still performing and touring today.

4.  Word of the Day—the word of the day is “spinach” not the leafy green vegetable that Popeye the Sailor loved to eat but something spurious which describes too often the arguments we hear out of the Swamp.
5.  Still Trekking—celebrating the birth on this day in 1931 of noted Canadian actor William Shatner best known as Captain Kirk in the Star Trek movies and television series  and a commercial pitchman for Priceline.com and who at over 90 years of age aboard Jeff Bezos’s Blue Origin became the oldest man to go into space.
On this day in:
a. 1972 SCOTUS ruled in the case of Eisenstadt v. Baird that unmarried couples could possess contraceptives to let the good times roll.
b. 1993 Intel Corporation shipped its first Pentium chip featuring 60 MHz clock speed, 100+MIPS and a 64 bit data path.
c. 1997 American figure skater Tara Lipinski at 14 years 8 months of age became the youngest World Championship Figure Skater.
d. 2016 3 Islamist suicide bombers killed 32 people and injured 316 at the Brussels Airport and the Maelbeek/Maalbeek Metro Station.
e. 2019 the Special Counsel investigating the 2016 election aka The Russian Collusion Hoax Investigation concluded with Robert Mueller’s release of his report to the Attorney General.
Reflections on going into space at 90+ years of age: “It was so moving to me. This experience; it was something unbelievable. Yeah, weightlessness, my stomach went out, this was so weird, but not as weird as the covering of blue – this is what I never expected. It’s one thing to say “oh the sky ... and it’s fragile,” it’s all true. But what isn’t true, what is unknown, until you do [go to space] is this pillow, there’s this soft blue. Look at the beauty of that color. And it’s so thin and you’re through it in an instant. How thick is it? Is it a mile?” William Shatner upon his return to Earth after a far too brief trip into space on Blue Origin.
Please enjoy the poems on events of interest on my twitter account below (if you like them, retweet, and follow me) and follow my blogs. Always good, incisive and entertaining poems on my blogs—click on the links below. Go to www.alaskanpoet.blogspot.com for Ridley’s Believe It Or Not—This Day in History,  poems to inspire, touch, emote, elate and enjoy and poems on breaking news items of importance or go to  Ridley's Believe It Or Not for just This Day in History.

© March 22, 2022,  Michael P. Ridley aka The Alaskanpoet
Alaskanpoet for Hire, Poems to Admire
Poet Extraordinaire, Beyond Compare
A Unique Gift, All Recipients Receive a Lasting Lift

Posted by Michael P. Ridley aka the Alaskanpoet at 12:17 AM