March 2, 2022 Ridley's Believe It Or Not Ash Wednesday

CV World Cases: The planet continues with cases still increasing but the increase slowing down with cases now over 439 million at 439,535,350 cases,  61,415,626 of which are active, 378,119,724 closed with 372,132,258 recoveries (98.42%), and nearing the 6,000,000 barrier 5,987,746 deaths (1.58% )to continue the low trend of increased cases with increased recovery percentages and decreased death percentages with some plateaus, dips, and rises.
CV USA Cases: Total cases now passing 80 million at 80,697,924 with 25,989,717 active cases  of which 7522  are serious or critical, (15,517 on 12/12) (back to steady decreases despite the increase in active cases due to the relative mildness of the Omicron variant) to .029 % of active cases (back to back steady decreases despite the increase in active cases due to the relative mildness of the Omicron variant  and to increase  the reduction from the 29,271 peak on 12/31/2020 to 21,749, 54,708,207 closures with 977,402 deaths (1.79%) and with 53,730,805 recoveries (98.21%). Our death rate percentage is .21%  higher than the world’s death rate.
Standing: On a deaths per million population measure on a steady but slowing climb to 2918 the U.S. ranks behind Peru (6247) the new number 1 which has had a quantum leap in deaths previously unmatched which was a change in the classification to give Peru the a new method of reporting; Bulgaria (5194), Hungary (4588), Romania (3347),  Brazil (3021), and Poland (2961) and slightly higher than Argentina (2752), Columbia (2681), Belgium (2587), Italy (2573), Mexico (2428), Russia (2419), UK (2361), Chile (2187), Spain (2135), Portugal (2080), France (2015), Ecuador (1947),  Bolivia (1796),  Sweden (1697) that never closed its economy down like we did, and Switzerland (1512).
US Vaccinations: As of 03/02/22   553.4 million doses, 362,353 per day last week ( 75.7%) of population now vaccinated  with at least one shot)  and in California 53,124 per day  (which means at least 81.7% of the population of California has received at least one shot) which many believe is necessary to develop herd immunity (other than Flip Flop Fauci who may believe that 90% is required).  In California 71,593,605 total doses have been given (83.3%  of doses received to exceed the U.S. average of 80.3%), California has not moved  from 12th  of the 50 states in terms of the percentage of doses administered as a percentage of doses delivered to the states and at 70.4%% of its population fully vaccinated compared to the U.S. average of 64.3% and has moved from 8th to 12th  in terms of the percentage of the population fully vaccinated compared to other states (nothing like a recall election to get Newsom’s attention and performance).
Non  CV News: On the 7th day of the Russian invasion, Russian bombs, missiles and shells are striking Ukrainian cities at will inflicting civilian casualties and creating a flood of refugees fleeing the country that will quickly surpass I million while the UN passes a resolution condemning Russia  (chances of that affecting Russian behavior are less than zero); Biden’s statement that the U.S. is doing everything it can to assist the Ukrainians evidently does not include Iron Domes or anti-aircraft missiles to shoot incoming planes and missiles out of the skies; the Biden Administration is trying the tact of reaching out directly to the Russian people about the invasion as some 7,000 Russians have been arrested for protesting the war; China is once again proving that it is not our friend as it refuses to join in sanctions against Russia and will continue to trade with it; Biden heading toward his Marine Corps helicopter actually stopped to take questions from reporters but when the issue of abortion came up, Jill Biden came to his rescue and led him away; in addition to gas prices going through the roof, car owners in large cities have a new worry—carjackings which are also soaring and increasingly dangerous as the carjacker is likely to point a firearm at the driver; Pelosi must have upped her dose of Botox as she stood up when Biden was talking about burn pits not to clap but rub her fists together and then sit down; Roman Abramovich a Russian oligarch who is supposed to be worth $13 has decided to sell Chelsea Football Team and set up a foundation to aid Ukrainian victims of Russia’s invasion (wonder if he saw the writing on the wall over Biden’s plans to go after oligarchs’ assets wherever they may be found);  Katie Meyer, 22 year old senior and goalie for Stanford’s Women NCAA Championship Team has suddenly died on campus with no cause of death yet revealed; Biden’s SOTUS had to be taken with a large grain of salt and Botox to keep a straight face but leave it to the political cartoonist to reveal how to cope with the stench of reality: 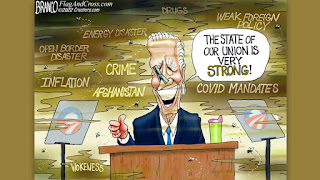 Chicago Gun Violence: Hey Jackass.com is alive and well to collect data to show that through March 1, 2022, gun violence involving mostly persons of color shooting mostly persons of color in Chicago is alive and well with 404 shot of whom 87 have died while 2021 shootings numbers compared to 2020 are 4544 to 4248 and deaths are 846 compared to 797.
As always, I hope you enjoy today’s holidays and observances, factoids of interest for this day in history, a video recording of “Without You” by Harry Nilsson; the fact that you never sopite listeners; and a quote by Hermann E. Ott on the cost of future flights, secure in the knowledge that if you want to send a gift for any memorable events like Valentine’s Day or St. Patrick’s Day, college graduations, birthdays, weddings, or anniversaries, you know that the Alaskanpoet can provide you with a unique customized poem at a great price tailored to the event and the recipient. Please contact me for details on pricing.
1.  Read Across America Day—created this day in 1998, the birthday of Doctor Seuss, by the NEA and the Seuss Foundation to encourage reading by school children a skill needed more than ever in this complex world where far too many high school students in urban schools are graduating but reading at 5th and 6th grade levels.
2.  Ash Wednesday—celebrating the beginning of the 46 days of Lent before Easter.
3.  1972  Number 1 Song—the number 1 song in 1972  on this day was  “Without You” by Harry Nilsson  on a run in that position for 5 weeks  to join 22 other number 1 songs and 17 other acts hit the charts at Number 1 for the first time. Here is a recording of Nilsson performing “Without You”: https://www.youtube.com/watch?v=8dnUv3DUP4E Nilsson was an American singer songwriter who achieved fame in the 70’s and was one of the few artists to achieve commercial success without touring but died too early from a second heart attack on January 15, 1994 at age 52.
4.  Word of the Day—the word of the day is “sopite”  which means to put to sleep a skill which far too many politicians exhibit in their attempts to become noted orators.
5.  Taste of Life—celebrating the birth on this day in 1948 of Rory Gallagher, noted Irish singer, songwriter, and guitarist with the band Taste but had an extreme fear of flying and took medication to overcome that but given the fact that he was a heavy drinker and the medication prescribed caused liver problems which necessitated a liver transplant which led to a staph infection in recovery which killed him on June 14, 1995 at age 47.
On this day in:
a. 1901 United States Steel Corporation was formed by the merger of the Carnegie Steel Company and the Federal Steel Company to become the first $1 billion market cap company.
b. 1969 the world became a much smaller planet with the first test flight of the Anglo-French Concorde.
c. 1989 12 European Union nations in a great move to restore the diminishing Ozone layer agreed to end the production of chlorofluorocarbons by the end of the century.
d. 1991 the 5 hour battle at  Rumaila Oil Field ended in an overwhelming destruction of fleeing Iraqi tanks and other vehicles bringing he short Gulf War to a close.
e. 1992 Armenia, Azerbaijan, Kazakhstan, Kyrgyzstan, Moldova, San Marino, Tajikistan, Turkmenistan, and Uzbekistan, all former parts of the Soviet Union other than San Marino joined the United Nations.
Reflections on the Concorde: “Our resources will diminish in the coming decades at a time when hunger for energy grows dramatically in China and other parts of Asia. Eventually, it will just be impossible to fly - normal flights will become as expensive as flying with the Concorde. - Author: Hermann E. Ott Founder and Director for the German Office of Client Earth
Please enjoy the poems on events of interest on my twitter account below (if you like them, retweet, and follow me) and follow my blogs. Always good, incisive and entertaining poems on my blogs—click on the links below. Go to www.alaskanpoet.blogspot.com for Ridley’s Believe It Or Not—This Day in History,  poems to inspire, touch, emote, elate and enjoy and poems on breaking news items of importance or go to  Ridley's Believe It Or Not for just This Day in History.

© March 2, 2022,  Michael P. Ridley aka The Alaskanpoet
Alaskanpoet for Hire, Poems to Admire
Poet Extraordinaire, Beyond Compare
A Unique Gift, All Recipients Receive a Lasting Lift

Posted by Michael P. Ridley aka the Alaskanpoet at 7:20 PM