CV World Cases: The planet continues with cases still increasing but the increase slowing down with cases now passing 471 million at 471,652,651 cases,  57,748,918 of which are active, 413,903,703 closed with 407,800,858 recoveries (98.53%), and crossing the 6,000,000 barrier 6,102,845 deaths (1.47% )to continue the low trend of increased cases with increased recovery percentages and decreased death percentages with some plateaus, dips, and rises.
CV USA Cases: Total cases now passing 81 million at 81,410,101 with 17,405,406 active cases  of which 3129 are serious or critical, (15,517 on 12/12) (back to steady decreases despite the increase in active cases due to the relative mildness of the Omicron variant) to .0180% of active cases (back to back steady decreases despite the increase in active cases due to the relative mildness of the Omicron variant  and to increase  the reduction from the 29,271 peak on 12/31/2020 to 26,142 with 64,004,695 closures with 997,933 deaths (1.56%) and with 63,006,732  recoveries (98.44%). Our death rate percentage is .09%  higher than the world’s death rate.
Standing: On a deaths per million population measure on a steady but slowing climb to 2985 the U.S. ranks behind Peru (6276) the new number 1 which has had a quantum leap in deaths previously unmatched which was a change in the classification to give Peru the a new method of reporting; Bulgaria (5290), Hungary (4688), Romania (3402),  Brazil (3055), and Poland (3024) and slightly higher than Argentina (2777), Columbia (2692), Belgium (2615), Italy (2618), Russia (2499), Mexico (2454), UK (2387), Chile (2300), Spain (2174), France (2151), Portugal (2110), Ecuador (1956),  Bolivia (1798),  Sweden (1765) that never closed its economy down like we did, and Switzerland (1549).
US Vaccinations: As of 03/20/22   558.4 million doses, 226,974 per day last week ( 76.0%) of population now vaccinated  with at least one shot)  and in California 35,108 per day  (which means at least 82.3% of the population of California has received at least one shot) which many believe is necessary to develop herd immunity (other than Flip Flop Fauci who may believe that 90% is required).  In California 72,309,362 total doses have been given (83.2%  of doses received to exceed the U.S. average of 80.1%), California is still stuck at 12th tied with Nevada of the 50 states in terms of the percentage of doses administered as a percentage of doses delivered to the states and at 70.9% of its population fully vaccinated compared to the U.S. average of 64.7% and has  moved from 11th  to 13th  in terms of the percentage of the population fully vaccinated compared to other states (nothing like a recall election to get Newsom’s attention and performance).
Non  CV News: The war in Ukraine continues with Russians making little if no progress in advancing but continuing to wage deadly missile and air attacks and shelling on civilian targets (Secretary of Defense used the term “wood chipper” to describe what Putin was pushing his troops into; as the UN announced that 10 million Ukrainians have been displaced or fled the country due to Russian targeted attacks on civilians, Fox News should be praised with its Red Cross affiliated relief fund for humanitarian aid to Ukraine which has raised over $11 million but Richard Childress perhaps merits more praise for his donation of a million rounds of ammunition delivered to Ukraine’s border for shipment to Ukrainian forces filling up Russian body bags; one has to feel for Psaki as she fields tough questions about the war in Ukraine but her answers on Russia’s concern on how its war against civilians will be portrayed in the history books makes her look like someone with their head in the sand as the only thing Putin cares about will be the escalating number of body bags full of Russians; Ketanji Jackson Brown is testifying before the Senate Judiciary Committee on her fitness to be confirmed as a SCOTUS Justice with Republicans concerned over her past decisions trying to walk the thin line of “advise and consent” and the bogus charges of “racism” being hurled at them by the MSM for doing anything other than rubber stamping her nomination; while Americans earning less than $400,000 a year are being ravaged by inflation, in Waukee, Iowa Apple is taking a big bite out of the bloated apple of corporate welfare receiving over $200 million as an inducement to build a data processing center that would hire 50 employees but which is now far behind schedule ( where is Senator Ernest, that noted hog farmer who surged to election with her notable castration ad on her knowing how to cut the pork?); with gas prices going through the roof, several Red run states are considering or implementing reductions in or holidays in paying state gasoline taxes (even California with its huge budget surplus is considering a $400 rebate to car owners; after Biden was on his proverbial knees begging Saudi Arabia to increase oil production, the kingdom refused and called upon the global community to take action against the Houthis; NYC’s former NYPD captain is not having much luck on the Big Apple’s crime surge as weekend shootings this weekend were up 383% from 2021 and shootings during the week had doubled; leftist author Ellen Hopkins tweeted that she wouldn’t want Justice Thomas to die but wouldn’t mind if the flu like symptoms which hospitalized him forced him to retire which she had the sense to at least delete after posting; Bush was rightfully mocked for appearing a naval ship proclaiming the war in Iraq was “Mission Accomplished” and the political cartoonist portrays what Biden has accomplished to the detriment of the nation: 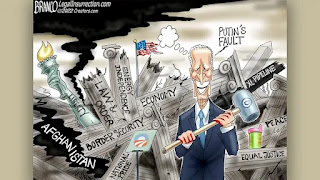 Chicago Gun Violence: Hey Jackass.com is alive and well to collect data to show that through March 20,  2022, gun violence involving mostly persons of color shooting mostly persons of color in Chicago is alive and well with 549 shot of whom 107 have died.
As always, I hope you enjoy today’s holidays and observances, factoids of interest for this day in history, a video recording of “Jump” by Van Halen; the fact that you oppose nations like Russia that wish to spiflicate their neighbors; and a quote by President Carter on boycotting the Moscow Summer Olympics, secure in the knowledge that if you want to send a gift for any memorable events like St. Patrick’s Day, Mothers’ Day, college graduations, birthdays, weddings, or anniversaries, you know that the Alaskanpoet can provide you with a unique customized poem at a great price tailored to the event and the recipient. Please contact me for details on pricing.
1.  World Poetry Day—created by UNESCO in 1999to promote the reading, writing, publishing and teaching of poetry around the globe:
In our 24/7 world getting smaller each day/When pressing issues and problems hold sway/There never is enough time to slow down and smell a rose/
Too bad we don’t rule in poetry and campaign in prose/Poetry energizes the soul/Moves the masses to achieve worthy goals/Put to music in patriotic songs/We are soon marching to right the world’s wrongs/Tears flow, hearts warmed and laughter summoned by the muse/Needed emotions in bureaucratic prose too easy to lose/On World Poetry Day put the prose away/Let poetry your troubles or boredom allay/© 3/21/2022 The Alaskanpoet

2.  International Day of the Forests—created by the UN General Assembly on November 28, 2012 to promote awareness of the importance of trees within and without of the forest to our wellbeing and commerce and those fauna and flora protected and nourished by them.
3.  1984  Number 1 Song—the number 1 song in 1984  on this day was  “Jump” by Van Halen on a run in that position for 57 weeks noncontinuous  to join 19 other number 1 songs and 14 other acts that  hit the charts at Number 1 for the first time. Here is a video recording of Van Halen performing “Jump”: https://www.youtube.com/watch?v=SwYN7mTi6HM Van Halen was an American pop rock band formed in Pasadena in 1973 and went on to be a dominant musical force in the 80’s but Eddie Van Halen who smoked and struggled with alcohol and drugs came down with tongue cancer which he fought for 5 years before having a stroke on October 6, 2020 and dying the same day at age 65 and brought an end to the band.

4.  Word of the Day—the word of the day is “spiflicate” which means to overcome or destroy by violence which describes to a tee what Putin is trying to do in Ukraine to the civilian population because his forces driving against Ukrainian troops are getting delayed filing up too many body bags.
5.  Working Class Rocker—celebrating the birth on this day in 1949 of noted pop singer Edward Mahoney, better known to his fans as Eddie Money who had 11 top 40 hits in the 70’s and 80’s but struggled with drugs and alcohol and picked up a third strike for being a lifetime smoker to be diagnosed with Stage 4 cancer of the esophagus on August 24, 2019 that led to his death on September 13, 2019 at age 70.
On this day in:
a. 1925 the Butler Act became law in Tennessee which forbade the teaching  of evolution in public schools.
b. 1952 Alan Freed presented the first rock and roll concert the Moondog Coronation Ball in Cleveland, Ohio.
c. 1970 the first Earth Day proclamation was issued by San Francisco Mayor Joseph Alioto.
d. 1980 President Jimmy Carter announced that the U.S. would boycott the Moscow Summer Olympics in response to the Soviet Union’s invasion of Afghanistan that would turn into over time the Soviets equivalence of our Vietnam War.
e. 2006 the social media site Twitter was founded, now infamous for its proclivity in censoring and banning conservative tweets.
Reflections on Boycott of the Moscow Summer Olympics due to Soviet invasion of Afghanistan: ““I can’t say at this moment what other nations will not go … “ the president told the athletes who had assembled at the White House. But, he added, “ours will not go. I say that not with any equivocation; the decision has been made. The American people are convinced that we should not go … The Congress has voted overwhelmingly, almost unanimously, which is a very rare thing, that we will not go. And I can tell you that many of our major allies, particularly those democratic countries who believe in freedom, will not go.” Jimmy Carter announcing the boycott.
Please enjoy the poems on events of interest on my twitter account below (if you like them, retweet, and follow me) and follow my blogs. Always good, incisive and entertaining poems on my blogs—click on the links below. Go to www.alaskanpoet.blogspot.com for Ridley’s Believe It Or Not—This Day in History,  poems to inspire, touch, emote, elate and enjoy and poems on breaking news items of importance or go to  Ridley's Believe It Or Not for just This Day in History.

© March 21, 2022,  Michael P. Ridley aka The Alaskanpoet
Alaskanpoet for Hire, Poems to Admire
Poet Extraordinaire, Beyond Compare
A Unique Gift, All Recipients Receive a Lasting Lift

Posted by Michael P. Ridley aka the Alaskanpoet at 10:39 PM