In war the successful general is the one who camouflages and deceives as to the true focus of his intent
Tricking the opposing forces to alter their concentration and disposition to a bogus attack prevent
In World War II the Allies created Operation Fortitude to cause the Germans to believe
D-Day would occur near Calais as the shortest route from England for a landing victory to achieve
Fake radio traffic, balloon tanks and artillery with Patton the invasion general often spotted opposite Calais
The 15th Army with most of the Panzers were entrenched waiting to the lightly armed invasion force to slay
Rommel knew from experience to prevail against the Allies it would be the Longest Day
If the German Panzers did not drive the Allies back into the sea any chance of victory would fade quickly away
The Russians called it maskirovka to conceal where and when they would attack
When the Germans had their panzers in the wrong place on Operation Bagration any chance to defeat it they would lack
Even the Germans could practice the art lulling the Allies into thinking Wacht en Rhein was for a defense line
To burst out of the Ardennes in the Battle of the Bulge that the surprised Allies were lucky to confine
Politics is war by another name and means
As Blues use the abortion hangers cards to from the issues voters wean
Inflation, crime, fentanyl, border, supply shortage including formula and Ukraine
Biden’s and Blues’ record on each bad enough to send their fall election prospects down the drain
<1 % of abortions now occur after the on demand time of more than  21 weeks
If Roe overturned and back to the states, most if not all would find the relief they seek
© 5/11/22 The Alaskanpoet
Leave it to the political cartoonist to trump a poem in attacking the distraction efforts of the Blues in using abortion to distract voters from real issues facing us. 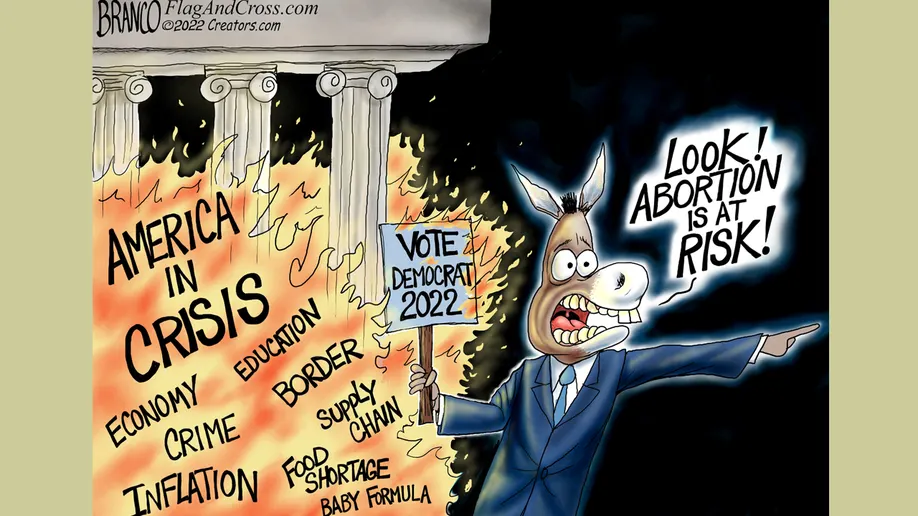 Posted by Michael P. Ridley aka the Alaskanpoet at 7:16 PM