Ridley’s Believe It Or Not For June 9, 2019  After Oakland and Denver have voted to decriminalize psilocybin mushrooms, AOC has introduced a rider to allow medical researchers to use mushrooms and other psychedelic drugs to treat diseases;  DNC lackey Donna Brazile is on the airways again touting that Russian collusion and interference cost HRC the election and HRC still unable to accept her lost was before her alma mater claiming the Mueller Report clearly shows obstruction of justice (it does but it is obstruction by the top levels of the FBI, CIA, DOJ, State Department and HRC in her destruction of emails and her devices); when it comes to delivering good medical care without long waits that are potentially deadly, we all know the VA is a disaster that defies correction regardless of the administration in power but we now find that incompetence runs to VA home loan programs as the VA charged 53,000 disabled veterans approximately $189 million for home loan fees for which they were exempt; Pelosi is rightfully getting push back for her inane comment that she wants to see the president in jail, but not from Rhode Island Representative Don Cecilline who is defending her (news flash Don there is a great deal of difference between questioning the place of birth of Obama and calling for prison time based on a bogus claim for obstruction after remaining silent on HRC’s destruction of e-mail evidence and devices); Spike Lee has joined the growing list of misguided celebrities calling for a boycott of filming in Georgia (play with the fire of boycott and you can get burned as conservatives pro lifers might launch a campaign to boycott his films a task made easier by the sky high movie ticket prices); Fed Ex has announced that it will not renew its contract with Amazon and instead focus on the growing broader e-commerce market (wonder if this gives the Postal Service the chance to raise prices on its contract with Amazon to the joy of President Trump?); the LBGT couple that was attacked on a London bus by five young men learned today that the attackers have been arrested but their religion has not been revealed (may be of interest due to radical Islam’s penchant for throwing gays off of buildings to their deaths); through June 8, 2019 1052 people  have been shot in Chicago of whom 199 have died (what makes the Smollett case so frustrating is that it forced the city of Chicago to allocate scarce detective resources when in only 9% of the shootings resulting in murder have a suspect being charged this year).
1. Coral Triangle Day—created to promote awareness of the need to protect and preserve the largest bio-diverse area on the planet involving a triangular portion of Pacific and Indian Oceans: 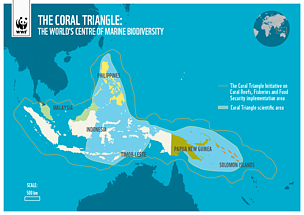 2. National Earl Day—created by Robert Slack not to honor royalty but rather to honor since 2016 the accomplishments of people named Earl from such people as Earl Warren, the Chief Justice of SCOTUS, Earl the “Pearl” Munroe, Hall of Famer Basketball player, or Earl Scruggs of the Foggy Mountain Boys who left an indelible mark on bluegrass music with his guitar.
3. 1940 Number One Song—the number one song on this day in 1949 was “The Woodpecker Song” by Glenn Miller and His Orchestra on a run of 7 weeks in that position. Here is a recording of the song: https://www.youtube.com/watch?v=8QlQWa9CETE  Unfortunately his role as the leader of the Army Air Force Band in World War II ended with his disappearance over the English Channel while enroute to Paris from England on December 15,1944.
4. Word of the Day—today’s word of the day as we move from words beginning with “o” to words beginning with “p” is “peirastic” which means experimental or tentative which explains why companies produce beta models before going into full production.
5. There Goes the Fox Neighborhood—celebrating the birthday on this day in 1944 of 23 foxhound puppies, all of whom survived,  to W.N. Ely’s foxhound Lena of Ambler, PA.
As always, I hope you enjoy today’s holidays and observances, a music link to Glenn Miller and His Orchestra,  5 factoids of interest for this day in history, the fact that you always first build a peirastic model before going into production.
On this day in:
a. 1915 William Jennings Bryan resigned as Secretary of State over the failure of Woodrow Wilson to ask for a Declaration of War following the sinking of the Lusitania in May.
b. 1928 Charles Kingsford Smith landed a Fokker Trimotor names the Southern Cross   in Australia to complete the first transpacific flight across the Pacific from Oakland to Hawaii to Fuji to Australia.
c. 1959 the USS George Washington, the world’s first nuclear ballistic missile submarine was launched.
d. 1973 Secretariat became the first horse in 25 years to win the Triple Crown, winning the Belmont Stakes by a record 31 lengths
e. 1978 in a what took you so long moment the Church of Jesus Christ of Latter-day Saints opened up its priest hood to “all worthy men” thereby ending its 148 year policy of excluding black men.
Reflections on the lack of a military response to the sinking of the Lusitania: “If Lincoln had acted after the firing of Sumter in the way that Wilson did about the sinking of the Lusitania, in one month the North would have been saying they were so glad he kept them out of the war and that they were too proud to fight and that at all hazards fratricidal war must be averted.”Theodore Roosevelt strong words but ignored the fact that our army in 1915 was almost non existent and the draft was not implemented until spring of 1917.
Please enjoy the poems on events of interest on my twitter account below (if you like them, retweet and follow me) and follow my blogs. Always good, incisive and entertaining poems on my blogs—click on the links below. Go to www.alaskanpoet.blogspot.com for Ridley’s Believe It Or Not—This Day in History, poems to inspire, touch, emote, elate and enjoy and poems on breaking news items of importance or for just This Day in History go to   www.Alaskanpoethistory.blogspot.com.
© June 9, 2019  Michael P. Ridley aka the Alaskanpoet


Posted by Michael P. Ridley aka the Alaskanpoet at 12:13 PM