June 10, 2019 Ridley's Believe It Or Not Alcoholics Anonymous Founders' DayDo

Ridley’s Believe It Or Not For June 10, 2019 A helicopter was forced to make a crash landing on the roof of the AXA Equitable Building in New York City, killing one person and starting a fire that was quickly put out; Joe Biden may be he leaing Blue but he is attacking scorn from other Blue candidates like chum on the water attracts sharks over his light campaign schedule, missing a big event in Iowa and his trying to link himself to Obama (you think this is a frenzy wait until the drumbeat over his quid pro quo for his son Hunter in Ukraine and China gets more air time as Trump should worry that someone who can easily beat given his pediculous record on the economy); while tourists in Dominican Republic seem to be dying recently like flies, former Boston MLB player was shot and wounded in a Dominican Republic bar but out of danger; another crack in the glass ceiling as Brigadier General Laura Yaeger became the first woman to lead a U.S. Infantry Division; Steve Lopez of the Los Angeles Times not known for being anti-Blue, slammed Mayor Garcetti and other Blue administration over the homeless explosion in L.A. while scarce public resources are going aid illegal aliens in this city and state; Kyle Chrisley a star on Chrisley’s Family Knows Best has had meth possession charges in Oklahoma dropped but faces a warrant from Georgia  for threatening his ex-wife; in a sign that people are fed up with China’s repressive regime, hundreds of thousands of Hong Kong residents (1 in 7) in went to the streets to protest a proposed extradition act by China enabling it to extradite Hong Kong residents back to China; 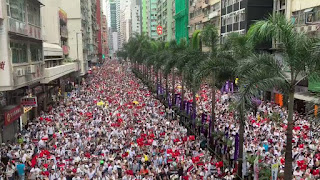 the Venezuela border with Columbia opened after 4 months and thousands fled across to buy food, medicine and other necessities that are unavailable in Maduro’s tyrannical failed country; John Dean, former White House Counsel to Nixon and now a Cack News Network contributor and rabid anti-Trump is returning to Capitol Hill to testify on his perceived parallels to the obstruction of justice of Nixon and Trump (total showboating as he has squat firsthand knowledge about Trump’s dealings in this Mueller witch-hunt); through June 9, 2019 1057 people  have been shot in Chicago of whom 199 have died (what makes the Smollett case so frustrating is that it forced the city of Chicago to allocate scarce detective resources when in only 9% of the shootings resulting in murder have a suspect being charged this year).
1. Alcoholics Anonymous Founders Day—celebrating in Dayton, Ohio the founding of Alcoholics Anonymous a self help organization that has helped millions to cope with the scourge of alcoholism on this day in 1935 by Doctor Bob Smith and Bill Wilson.
2. Ball Point Pen Day—celebrating the filing of a patent for a ball point pen on this day in 1943 with the European Patent Association by the  Bíró brothers, László and György, who are credited with the invention of the ballpoint pen which has totally supplanted in terms of number and lack of mess the fountain pen.
3. 1941 Number One Song—the number one song on this day in 1941 was “My Sister and I” by Jimmy Dorsey and His Orchestra on a run of 1 week in that position. Here is a recording of the song: https://www.youtube.com/watch?v=PrAZmmTzYrg Unfortunately this smoker had his baton taken away permanently by lung cancer on June 12, 1957 while his last song “So Rare” was number 2 on the charts representing his attempt to branch out into rock music.
4. Word of the Day—today’s word of the day as we move from words beginning with “o” to words beginning with “p” is “pejorate” which means to worsen which describes to a tee what is happening on our southern border due to Blues’ refusal to cross the aisle and solve the problem on an open border and illegal immigration.
5. Ace of the Yellow Brick Road—celebrating the birthday on this day in 1922 of noted performer Frances Gumm better known to her fans as Judy Garland who began performing in vaudeville at 2 ½, was most noted for her role as Dorothy in The Wizard of Oz, married 5 times and sadly battled addiction and alcohol abuse to die of an overdose on June 22, 1969.
As always, I hope you enjoy today’s holidays and observances, a music link to Jimmy Dorsey and His Orchestra,  5 factoids of interest for this day in history, the fact that you hope the voters will end the Blues’ attempt to pejorate the border crisis; a quote by the Roman poet Ovid on the use of alcohol versus naps.
On this day in:
a. 1944 the 2nd SS Panzer Division Das Reich delayed by French guerillas while trying to reach Normandy to fight the Allies massacred 642 men, women and children at the village of Oradour-sur-Glane.
b. 1963 President Kennedy signed into law the Equal Pay Act which banned pay discrimination based on sex.
c. 1964 the U.S. Senate ended a 75 day filibuster by Southern Democrats to pass the Civil Rights Act of 1964.
d. 1977 James Earl Ray convicted of the assassination of Martin Luther King escaped from Bushy Mountain Prison in Petros, Tennessee but was recaptured three days later.
e. 1991 11 year old Jaycee Lee Dugard was kidnapped in South Lake Tahoe and was not found until August 26, 2009 when her kidnapper Phillip Girrido was arrested along with his wife and both of them pled guilty to kidnapping and rape (she had two daughters from his rapes) and were sentenced to life imprisonment.
Reflections on avoiding the use of alcohol: “There’s more refreshment and stimulation in a nap, even of the briefest, than in all the alcohol ever distilled.” Ovid, noted early Roman poet.
Please enjoy the poems on events of interest on my twitter account below (if you like them, retweet and follow me) and follow my blogs. Always good, incisive and entertaining poems on my blogs—click on the links below. Go to www.alaskanpoet.blogspot.com for Ridley’s Believe It Or Not—This Day in History, poems to inspire, touch, emote, elate and enjoy and poems on breaking news items of importance or for just This Day in History go to   www.Alaskanpoethistory.blogspot.com.
© June 10, 2019  Michael P. Ridley aka the Alaskanpoet

Posted by Michael P. Ridley aka the Alaskanpoet at 12:19 PM