Chaos In Our Cities From Illegals

It is a tale of two cities both without pity but with crushing grief
Humans on the edge of starvation desperate for relief
The first can be found in El Salvador, Honduras and Guatemala in disease ridden slums
Where desperate poverty stricken people want by any means to the U.S. come
If they dodge the heat, the cartels, the robberies, human trafficking and rape
Claim asylum and into detention centers with a room over their head
Sheltered from cartel violence and three meals to be fed
Then released into the interior never for a hearing to return
Yet the see no crisis, hear no crisis, feel no crisis Blues have no concern
The other cities are found across this nation sprouting up on sidewalks and parks 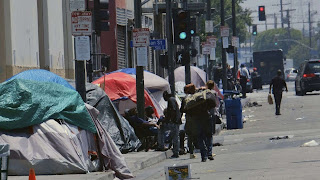 Along bike paths, levees, under bridges,  in subways or any place to stay dry and  warm when it rains or gets dark
A sea of tents, fields of litter and trash and used needles to mark the boundaries of these cities
Abandoned by the ruling elite to a life full of despair and most gritty, a life most shitty
In L.A, these cites population grows by leaps and bounds
In the suburbs, the NIMBIES rail to have no homeless around
While the Blues make the homeless problem worse
Holding out free health care for illegals a magnet attraction curse
No matter how quickly we build shelters they will overflow
As long as illegals believe that can stay here they will in huge numbers go
No more aid, no more benefits, no more food stamps or housing aid
No asylum unless heard in home country time to stop this illegal parade
Or kiss your standard of living and values down a deep drain
While we at it,  end the chain migration of illiterates and low skilled brains
On illegal immigration Blues remain MIAS
So the chaos on the border gets worse every day
© June 14, 2919 Michael P. Ridley aka the Alaskanpoet

Posted by Michael P. Ridley aka the Alaskanpoet at 7:49 PM