June 8, 2019 Ridley's Believe It Or Not World Brain Tumor Day

Ridley’s Believe It Or Not For June 8, 2019  Mexico on the tariffs to go into effect has blinked and is going to aid in the fight against illegals crossed its southern border and its border into the U.S. and and the tariffs scheduled to go into effect of Monday will not but true to effect CNN’s spin was not one of congratulations but an event designed to distract from the poor job numbers of 75,000 in May (so typical of the Cack News Network’s anti-Trump spin) and Pelosi comes across as a blithering idiot for Trump recklessly attacking Mexico with the threat of tariffs; Pelosi was really slammed by Trump for her role as Speaker was the target of scathing rebukes by MDNBC for her comment that she didn’t want to see Trump impeached but in jail which is something you would expect in Banana Republics or regimes like Pakistan (shame on you Pelosis your rhetoric is totally unproductive, damaging to the nation and belongs in the trash heap along with your failed ideas); we all know that bicycling on the streets with cars poses some risk as does riding on a road in an Amish wagon as a suspected DUI ran into on in Southern Michigan killing 2 children (when we ever learn in an era of Uber and Lyft and designatied driver that drinking and driving is a terrible idea); Peter Buttigieg and his husband are in a can’t lose if Warren wins the nomination and the election as the two of them have student debt of $113,291 of student debt that would be discharged (wonder if his campaign slogan will be vote for me to end by student debt); Barr may be picking up subpoenas like a picnic table laden with food picks up flies as Cummings’ oversight is supposedly moving forward with a contempt citation over Barr’s refusal to release certain documents pertaining to the inclusion of citizenship status on the census (this paragon of bias and partisanship's wife is in hot water over complaints of perjury and self dealing with her charity); although Trump has tweeted in support of the LGBT community in Pride Month, the White House has refused to fly the Rainbow Flag at U.S. Embassies;
through June 7, 2019 1036 people  have been shot in Chicago of whom 196 have died (what makes the Smollett case so frustrating is that it forced the city of Chicago to allocate scarce detective resources when in only 9% of the shootings resulting in murder have a suspect being charged this year).
1. World Oceans  Day—created by the UN in 2008 to promote conservation of flora and fauna in the the oceans and to protection them from pollution.
2. World Brain Tumor  Day—created by the German Brain Tumor Association in 2000 to create awareness of brain tumors and the need for research to prevent and treat them; two of the more noted personalities that died from brain tumors were Senatator Ted Kennedy  and Senator John McCain.
3. 1939 Number One Song—the number one song on this day in 1939 was “And The Angels Sing” by Benny Goodman on a run of 4 weeks in that position. Here is a recording of the song with Martha Tilton providing the vocals: https://www.youtube.com/watch?v=heXQ-zgyfQY The King of Swing who was supporter of integration died on June 13, 1986 at age 87 and the angels stopped singing for her on December 8, 2006 at the age of 91.
4. Word of the Day—today’s word of the day as we move from words beginning with “o” to words beginning with “p” is “pediculous” which means lousy which describes most politicians’ ideas especially those calling for more social spending.
5. Where Would We Be Goday Without Him—celebrating the birthday on this day in 1955 of Tim Berners-Lee the inventor of the World Wide Web and the first person to communicate between computers with the Hype Text Transmission Protocol (http) which has changed our lives and how we do business and interact forever.
As always, I hope you enjoy today’s holidays and observances, a music link to Benny Goodman with Martha Tilton, 5 factoids of interest for this day in history, the fact that your ideas are not pediculous, and a relevant quote from the dissent of John Marshall Harlan in the case of Plessy v. Ferguson, secure in the knowledge that if you want to find a gift for any memorable events like college graduations, birthdays, weddings, or anniversaries, you know that the Alaskanpoet can provide you with a unique customized poem at a great price tailored to the event and the recipient. You need only contact me for details.
On this day in:
a. 1984 George Orwell’s 1984 was published.
b. 1953 in a the walls of Jim Crow are starting to crumble moment SCOTUS in District of Columbia v Fred R. Thompson Co ruled that restaurants in Washington, D.C. could not refuse to serve blacks.
c. 1967 Israeli warplanes attack the USS Liberty in international waters off the coast of Israel, killing 34 and wounding 171 due to Israel’s belief that the ship was monitoring radio transmissions to and from its planes attacking targets in the Sinai and Egypt.
d. 1972 nine year old Phan Thị Kim Phúc burned by napalm was photographed in one of the iconic photos of the Vietnam War by photographer Nick Ut who who a Pulitzer Prize; 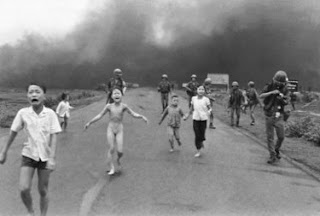 Ms. Phuc survived and now lives in Canada.
e. 2009 two American journalists who had illegally entered North Korea were sentenced to 12 years hard labor but were pardoned on August 5 on President Clinton’s visit to North Korea.

Reflections on brain tumors: “The present treatments for brain cancer are not curative. We need new and better treatments. More funding for research. Legislation to improve the research system and to provide better access to care, treatment, and rehabilitation services for all brain tumor survivors.” Shannon O’Brien, former Democratic Congresswoman from Massachusetts.
Please enjoy the poems on events of interest on my twitter account below (if you like them, retweet and follow me) and follow my blogs. Always good, incisive and entertaining poems on my blogs—click on the links below. Go to www.alaskanpoet.blogspot.com for Ridley’s Believe It Or Not—This Day in History, poems to inspire, touch, emote, elate and enjoy and poems on breaking news items of importance or for just This Day in History go to   www.Alaskanpoethistory.blogspot.com.
© June 8, 2019  Michael P. Ridley aka the Alaskanpoet

Posted by Michael P. Ridley aka the Alaskanpoet at 2:08 PM