Move over Francisco Sanchez you have a new illegal alien celebrity mate
Juan Razo an example of the violence Obama’s open border equates
Stopped three weeks ago but by Ohio deputies but by the Border Patrol told to release him
Goes on a crime spree with the results deadly and grim
A woman shot, another woman killed, a young girl almost raped
Now in jail with a bail so high a trial he will not escape
Not all illegals are here with criminal intent
But rather the desire to find a job with money earned to back to their family sent
If Coulter’s facts in Adios America  on illegal alien crime are correct
Obama’s refusal to deport or secure the border is an idea we must reject
Immigration law is not like an all you can eat buffet to feast on items you like to taste
While ignoring items you dislike and passing them by and letting them go to waste
Another example of Obama’s fatal flaw
Use of his vaunted pen, ignore or fail to enforce disliked laws
© July 29, 2015 Michael P. Ridley aka the Alaskanpoet
Alaskanpoet for Hire, Poems to Admire


Poet Extraordinaire Beyond Compare
Rhymes for All the Memorable Times
The Perfect Gift, All Recipients to Receive a Lasting Lift 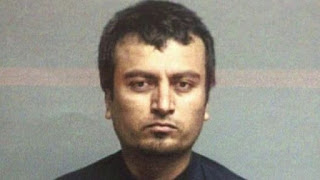 Posted by Michael P. Ridley aka the Alaskanpoet at 3:00 PM