January 7, 2022 Ridley's Believe It or Not International Programmers' Day

CV World Cases: The CV pandemic across the planet continues on an increasing basis with cases now over 301 million at 301,270,608,519 cases,  38,221,922 of which are active, 263,386,597  closed with 257,893,666 recoveries (97.91%), and nearing the 5,500,000 barrier 5,492,931 deaths (2.09% )to continue the low trend of increased cases with increased recovery percentages and decreased death percentages with some plateaus, dips, and rises.
CV USA Cases: Total cases now nearing 60 million at 59,564,116 with 16,619,075 active cases  of which 21,457  are serious or critical, (8,599 on 3/25/2021) (back to steady decreases with upticks despite the  Delta and Omicron Variants to .129% of active cases and to decrease the reduction from the 29,271 peak on 12/31/2020 to 7,814, (serious or critical cases now reported again), 42,945,041 closures with 855,843 deaths (1.99%) and with 42,089,198 recoveries (98.01%). Our death rate percentage is .10% lower than the world’s death rate.
Standing: On a deaths per million population measure on a steady but slow climb to 2563 the U.S. ranks behind Peru (6028) the new number 1 which has had a quantum leap in deaths previously unmatched which was a change in the classification to give Peru the a new method of reporting; Bulgaria the new number 2 (4564), Hungary (4134), Romania (3097), Brazil (2885) which has been hit with a rapid rise in deaths now slowing down passed by Romania, Argentina (2562), and newly added to the list Columbia (2518),  and slightly better than Belgium (2358), Poland (2631), Mexico (2290), Italy (2299),  UK (2188), Russia (2154), Chile (2026), Spain (1920), France (1909), Ecuador newly added to list (1867),  France (1909), Portugal (1838),  Bolivia (1669),  Sweden (1504) that never closed its economy down like we did, and Switzerland (1420).
Tests: No need to tally tests as testing programs are functioning well but the rapid tests which the Biden Administration was caught flatfooted on the ease of transmission of the Omicron Variant.
US Vaccinations: As of 01/07/06 515.16 million doses,  1.13 million per day over last week (2 weeks left for 75% of population to be vaccinated  with at least one shot  and in California 273,904  per day  (which means at least 81% of the population of California has received at least one shot) which many believe is necessary to develop herd immunity (other than Flip Flop Fauci who may believe that 90% is required).  In California 62,900,191 total doses have been given (85.9%  of doses received to exceed the U.S. average of 81.6%), California has not moved from 8th of the 50 states in terms of the percentage of doses administered as a percentage of doses delivered to the states and at 66.6% of its population fully vaccinated compared to the U.S. average of 62.4% and has  moved from  to 12th tied with Oregon  in terms of the percentage of the population fully vaccinated compared to other states.
Non  CV News:  Harris and Biden spoke the anniversary of the Capitol Protests which speeches were fawned over by the MSM predictably as the oration equivalent of the best thing as sliced bread but realistically represented another missed opportunity for the Biden Administration to fulfill on its promised on Inauguration Day to unify the country as Harris conflated January 6th with Pearl Harbor and 9/11 and Biden unleashed scathing ad hominem attacks on Trump (Blue House members dressed in black and holding candles garnished the memorial);  job numbers came in for December missing expected increased job numbers of 400,000 by 201,000; Biden touted that  his Build Back Better program will solve inflation and allow more workers to return to the labor force; in another glaring example of the need to fine tune stimulus checks from the government,
it was revealed that Dzhokhar A. Tsarnaev, the convicted Boston Marathon Bomber had received a stimulus check in June which a federal District Court Judge in Boston has ruled must be used to compensate his victims; SCOTUS heard over 3 hours of oral arguments on Biden’s vaccine mandate promulgated by OSHA for employers of more than 100 employees (our health care system is being hit by the perfect storm as 1000’s of health care workers have been laid off due to Biden’s vaccine mandate as infections of the Omicron virus are soaring which may have bearing on how the court rules); Seals who view themselves as immortal and unbeatable in dealing with 2 legged enemies found a District Court Judge who sided with them by invoking a stay on his vaccine mandate due to lack of religion exemption; in the Aubrey case in which the 3 defendants were convicted, the judge sentenced Greg and Travis McMichaels to life without possibility of parole and William Bryan who filmed the encounter and shooting to life with possibility of parole; not sure who Biden is listening to on COVID but he is not backing down on his claim that we can contain the virus (so far looks like the proverbial wing and a prayer); Cuomo dodged the bullet of sexual abuse as a judge in New York dismissed that case against leaving only a chance that the feds still investigating the nursing home scandals with elderly residents there being exposed to COVID and dying by the hundreds which deaths Cuomo has been alleged to have concealed; in Catskill, New York, a man who sprayed himself with a hand sanitizer and burst into flames after being tased in the police station house has died after a 6 week stay in a hospital burn unit; Harris has a proclivity for shedding staff but it looks like her new communications director Jamal Simmons is already self-destructing surfaced where he questioned why 2 illegals being interviewed on TV were not being deported by ICE (has to be a question that many Americans are asking also as the surge in illegals continues unabated); as the progressives with their armed guards continue to press to “defund the police” or “reimagine the police,” leave it to the political cartoonist to convey the terror and concern for safety many Americans, especially women, have over the reality of the effect of such movements: 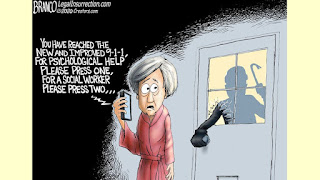 Chicago Gun Violence: Hey Jackass.com is alive and well to collect data to show that through January 6, 2022, gun violence involving mostly persons of color shooting mostly persons of color in Chicago is alive and well with 47 persons shot of whom 9 have died while 2021 shootings numbers compared to 2020 are 4544 to 4248 and deaths are 846 compared to 797.
As always, I hope you enjoy today’s holidays and observances, factoids of interest for this day in history,  a recording link to “Cry” by Johnnie Ray and the Four Lads, the fact that you have little tolerance for slipslop communications, and a quote from Hassan Chalghoumi, an imam of the Paris suburb of Drancy on the massacre at Charlie Hebdo , secure in the knowledge that if you want to send a gift for any memorable events like Valentine’s Day or Martin Luther King, Jr. Day, college graduations, birthdays, weddings, or anniversaries, you know that the Alaskanpoet can provide you with a unique customized poem at a great price tailored to the event and the recipient. Please contact me for details on pricing.
1.   International Programmers’ Day—created in 2007 and also celebrated on the 236th day of the year which is September 12th on leap years and the 13th on non-leap years to celebrate the contributions of programmers to the economy and our lives and to no one surprise given their propensity to hack a holiday created on the 13th in 2009 in Russia by Russian President Dmitry Medvedev.
2.  Distaff Day—celebrating in preindustrial days the return of women to the workplace which involved the use of a spindle and distaff to create threads.
3.  1952  Number 1 Song USA—the number 1 song in 1952 on this day was  “Cry” by Johnnie Ray and the Four Lads on a run of 10 weeks in that position to join 10 other songs that achieved number 1 status. Here’s a recording of Johnny Ray and the Four Lads “Cry”:  https://www.youtube.com/watch?v=Db-b6lQnOdw Ray, born partially deaf, was a popular singer in the 50’s but struggled with alcohol abuse which he was successful in hiding it from the public and quit performing after being hospitalized for liver problems in 1989 and died from liver failure on February 24, 1990 at the age of 63.
4.  Word of the Day—the word of the day is “slipslop” which means nonsensical talk which describes what we hear from far too many of our leaders.
5.  Near Ground Zero Not a Place to Be—celebrating the birth on this day in 1943 of Sadako Sasaki who was 1 mile away from ground zero at Hiroshima, was blown out of her home’s window, heavily radiated who by virtue of crafting over 1000 origami  paper cranes after being hospitalized for radiation sickness on February 24,  1955 before she died on October 25, 1955 from leukemia induced by the radiation and was cremated with her over 1000 cranes in her casket to become one of the more well-known hibakusha from Hiroshima.
On this day in:
a. 1927 the world became a smaller place as transatlantic phone service began between New York and London.
b. 1973 at a Howard Johnson’s in New Orleans, Mark Essex a former member of the Black Panthers and rabid anti-white hater, who on New Year’s Eve had shot 3 cops, wounding 1 and killing 2 but escaped and was still at large despite a massive manhunt entered a Howard Johnson’s and proceeded to wound 11 patrons, employees and cops while killing 7 to finally be cornered and then cut down in a hail of 200 bullets as he emerged from his hideout shooting.
c. 1980 President Jimmy Carter signed legislation authorizing a $1.5 billion loan to  bail out Chrysler Corporation.
d. 1999 the impeachment trial for President Clinton began in the Senate; no Blues voted to convict so he was acquitted as far less than the 2/3 vote necessary to convict.
e. 2015 2 jihadist terrorists in Paris attacked the newspaper headquarters of Charlie Hebdo, killing 12 and wounding 11 others for their “crime” of publishing cartoons disrespectful of Mohammad; French authorities after a massive manhunt cornered the two who were shot and killed 2 days later.
Reflections on the attack on Charlie Hebdo: "Their prophet is Satan. There is no connection between the Islamic faith and this minority." – Hassan Chalghoumi, an imam of the Paris suburb of Drancy, following the attack on Charlie Hebdo.

© January 7, 2022, 2021 Michael P. Ridley aka The Alaskanpoet
Alaskanpoet for Hire, Poems to Admire
Poet Extraordinaire, Beyond Compare
A Unique Gift, All Recipients Receive a Lasting Lift

Posted by Michael P. Ridley aka the Alaskanpoet at 1:47 AM