September 8, 2020 Ridley's Believe It Or Not World Literacy Day

CV USA Cases: New cases of 48,413 with total cases over 6 million at 6,444,645 (a .75% increase compared to yesterday’s .33% increase) with 2,538,,564 active cases of which 14,581, on a downward trend with slight blips from over 19,000 in the last 5 weeks  (14,694 yesterday and 16,885 on August 1), are in serious or critical condition as trend continues to go down, and 3,954,494 closures, 193,673 of which have been deaths (4.90% compared to yesterday’s 4.93%) and 3,760,821 of which have been recoveries (95.10% compared to yesterday’s 95.07%) (our death rate percentages continue to improve and are finally in single digits since Cuomo repealed on May 10 his order sending CV positive patients to nursing homes and ADL facilities and on a deaths per million population measurement at 584 ranks behind Peru (907), Belgium (854), Spain (631), UK (612), Chile (610), Bolivia (603), Ecuador (598), Brazil (597),  and Italy (588), ,  and only slightly worse than Sweden (577) that never closed its economy down like we did and Mexico (525) which announced it has run out of death certificates due to surge in deaths. We have now conducted 88,532,181 tests (now at 267,157/M compared to Russia at 265,565/M so Trump can now truthfully claim we conduct more tests on an absolute basis and on a per capital basis).
Non CV Case News: In Rochester following the outrage over the death of a nude black claiming he had CV resulting in a anti-spitting hood place over him to protect the officers, the Chief of Police and the command staff of the department have resigned and a grand jury impaneled; not sure what this might mean in terms of turnout and voting, but it seems Blues are leading in absentee ballot requests in key battleground states (Reds may have to pray that voters in states which allow early voting by mail wait until Biden’s fitness or lack thereof is exposed in the debates); Portland which has seen over 100 days of “protests” aka riots finally has its City Council back in town after it disappeared for 2 weeks as anti-BLM protesters attacked a BLM protester with a baseball bat and mace which a safe bet would be that that story is promoted while BLM riots are largely ignored (just a question of time before the fuse on violence between protesting groups is lit and people start getting really hurt); the New Jersey Turnpike Authority is removing American flags flown on overpasses to commemorate 9/11 to the dismay of many especially veterans; it may be like Quixote chasing a windmill in the hope of getting the resistance Blues to the table but Senate Republicans are going to make another effort with a stimulus targeting PPP extension, health care and education and perhaps and hopefully stimulus checks (don’t hold your breath as Pelosi and Schumer believe economy in tank is ticket to winning on Election Day); in Feces City gyms for public are closed but London Breed opens city owned gyms for public servants aka parasites while ranting Trump is a dictator and terrorist; this is what a wildfire in Southern California created by a gender awareness party looks like: 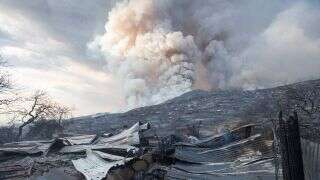 Seattle held hostage to Antifa riots is closing a park to a Christian worship rally (even if recall is permitted by State Supreme Court against Durkan and is successful, the poor residents of Seattle will still have to deal with what many consider to be a Marxist City Council; in the Breonna Taylor killing crime scene photos show dozens of shell casings and bullet marks through her apartment which suggest the 3 officers were shooting blindly and one officer appears to have worn a body cam although the police have claimed there are no body cam photos  (a black female officer has just been named as interim Louisville Police Chief which coupled with an investigation by the black AG might diffuse growing anger over the shooting); on the reveal all book front Mike McCormick who was Biden’s stenographer from 2011 to 2017 in his book Joe Biden Unauthorized raised serious questions over Biden’s mental fitness and the deterioration he witness along with Putin’s supposedly humiliating him in 2011; on the PC front USC should be ashamed of itself for suspending a professor in a business communications class indicating that in China a pause in  which we would say “umm” or “err” would be “nèi ge or nèi ge” which unfortunately for those with hyper thin skin is pronounced “NAY-guh”; Al Sharpton finally said something sharp that “Defund the Police” may be great for “Latte Liberals” but ordinary citizens need proper policing (good for you Al).

Chicago/Baltimore Gun Violence: In Chicago as of September 7, 2020, the number of shootings increased to 2,909 of whom 496 have died (total travesty of BLM when blacks are shot and killed by blacks in droves and only sounds of silence and complete absence of any protests in front of City Hall demanding action to curb the killings and shootings); Baltimore with a fraction of Chicago’s population and hoping against all hopes that 2020 will not be a record in terms of deaths but now seems to be shooting less and killing less and is now 273 behind Chicago at 223 murders (when will Chicago and Baltimore get serious about this carnage or is this the case of true racism as a Blue run city turns a deaf ear and a blind eye to the slaughter of people of color by people of color and when will the left focus on the problem of color on color shootings in Blue run cities which  have  been way  more  deadly and way more numerous than shootings by  police or by random mass shootings which occur much less.
As always, I hope you enjoy today’s holidays and observances, factoids of interest for this day in history, a musical link to “Vaya con Dios (God Walks with You)”  by Mary Ford and Les Paul,  the fact that you are philotechnical and a quote by Spock of Star Trek fame on the evil side of leaders, secure in the knowledge that if you want to find a gift for any memorable events like Father’s Day, college graduations, birthdays, weddings, or anniversaries, you know that the Alaskanpoet can provide you with a unique customized poem at a great price tailored to the event and the recipient. You need only contact me for details.
1. World Literacy Day—created by UNESCO on October 26, 1996 and first celebrated on this day in 1997 to promote awareness of the illiteracy that impacts over 700 million people worldwide and to encourage steps to reduce it.

2. World PT Day—created in 1996 by World Physiotherapy  to promote awareness of the contribution of physiotherapists to a person’s health, mobility and independence although with gyms closed in many areas it may be difficult for physiotherapists to practice their craft today.

3. 1953 Number One Song— the number 1 song in 1953 on a run of 9 weeks was “Vaya con Dios (God Walks with You)” by Les Paul and Mary Ford. Here us a recording of the song: https://www.youtube.com/watch?v=QqZ0Sdz_V40 This husband and wife duo had 16 top ten records between 1950 and 1954 but Mary and Paul divorced in 1964 due to Mary’s dislike of touring as their career declined due to rock and roll and her alcohol use increased leading to her death at age 53 on September 30, 1977. Les Paul was a pioneer in the solid state electric guitar and played into his 90’s, winning a Grammy at age 90 but at the age of 94 on August 12, 2009 the God that walked with him took his pick away for good due to pneumonia.

4. Word of the Day—today’s word of the day is “philotechnical” which means a love of the arts which is certainly a trait welcomed by starving artists.

5. Dark Secrets Sell--celebrating the birth on this day in 1924 of Grace Mellacious who was born into and grew up in poverty but loved to write, a joy she turned into Peyton Place, one of the bestselling novels of all times, but she also loved alcohol and died way too soon from cirrhosis of the liver at age 39 on February 25, 1964.

a. 1916 in an attempt to convince the military that women could be military dispatch riders. Augusta and Adeline Buren arrived in Los Angeles as the second and third female riders to accomplish the feat after a 5,500 mile cross country journey that took 60 days. Unfortunately, despite public praise for the performance of the motorcycle, the military was not impressed and their application was rejected.

b. 1944 London obtained the dubious distinction of being the first city to be hit by a ballistic missile as it was hit by a V-2 rocket, which finally ceased landing on London on March 27, 1945 but not before killing 2754 and wounding 6523.

d. 1974 President Gerald Ford in a move that probably cost him his reelection signed the pardon that absolved Richard Nixon of any crimes committed while in office.

e. 1975 U.S. Air Force Tech Sergeant Leonard Matlovich, a decorated Vietnam Veteran appeared on the cover of Time Magazine in his uniform with the caption “I Am A Gay” prompting his discharge but sadly he contracted AIDS and even though one of the first patients to receive AZT treatments, he died from AIDS on June 22, 1988 less than 2 years after being diagnosed with the disease.

Reflections which are frightening on what makes a leader: “"What makes one man an exceptional leader? We see indications that it's his negative side which makes him strong, that his evil side, controlled and disciplined, is vital to his strength. Your negative side removed from you, the power of command begins to elude you." Mr. Spock, "The Enemy Within"

© September 8, 2020 Michael P. Ridley aka the Alaskanpoet
Alaskanpoet for Hire, Poems to Admire
Poet Extraordinaire, Beyond Compare
A Unique Gift, All Recipients to Receive a Lasting Gift

Posted by Michael P. Ridley aka the Alaskanpoet at 2:41 PM