CV USA Cases: New cases of 43,586 with total cases over 6 million at 6,651,730 (a .66% increase compared to yesterday’s .81% increase) with 2,536,931 active cases of which 14,366, on a downward trend with slight blips from a high of 19,155 on July 23  (14,509 yesterday and 15,881 on September 1), are in serious or critical condition as trend continues to go down, and 4,158,385 closures, 198,293 of which have been deaths (4.77% compared to yesterday’s 4.8%) and 3,960,092 of which have been recoveries (95.23% compared to yesterday’s 95.18%) (our death rate percentages continue to improve and are finally in single digits since Cuomo repealed on May 10 his order sending CV positive patients to nursing homes and ADL facilities and on a deaths per million population measurement at 598 ranks behind Peru (925), Belgium (855), Spain (636), Chile (624), (Bolivia 624)  Brazil (617), Ecuador (614), and UK (613)  and only slightly worse than Italy (589) and Sweden (578) that never closed its economy down like we did and Mexico (546) which announced it has run out of death certificates due to surge in deaths. We have now conducted 92,403,500 tests (now at 278,828/M compared to Russia at 278,347/M so Trump is telling truth that we conduct more tests in number and on a per capital basis).
Non CV Case News: Maybe Biden had not seen the sick video of the scumbag who shot the 2 deputies  with a pistol, not an assault rifle, buy his first response was that we needed gun control to ban assault rifles (how would that work with criminals Joe?);  In a glaring example of why we need more protests on Blue Lives Matter and Green Lives Matter, a sick scum bag walked up to a sheriff’s patrol SUV and shot the 2 deputies inside, both of who had joined the force 14 months ago and one of whom was a mother with a 6 year old son but both are out of surgery and now fighting for their lives as a group of protesters gathered outside the hospital not praying for their recovery but shouting "Hope they 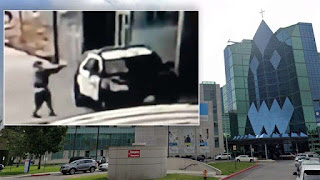 f---ing die!” (how sick); maybe in a sign we are moving back to some sense of normalcy, Pro Football is back with two future Hall of Famers square off with Brady and his new team, the Buccaneers, meeting Brees and the Saints; latest polls show Biden still in lead with Trump favored only in the area of handling the economy and surprisingly Biden favored in the area of law and order; Blumenthal still in a snit fit over spending millions and being rejected by Blues in the primaries will be pouring in $100 million of his own money for Biden in Florida (seems so far away that Blues were ranting over  corruption of large amounts of money by conservatives like the Koch Brothers); Andrew Giuliani, the son of the former Mayor of New York City has indicated he may run in 2021 as a Blue Congressman Max Rose running for re-election has just aired an ad touting the truth that Mayor Di Blasio is the worst mayor in NYC history (former mayor Jimmy Walker, hardly an icon of virtue,  must be rolling for joy in his grave after learning of the ad); Bishop Talbert Swan, infamous for tweeting that the Grim Reaper took the wrong Trump denigrates the shooting of 2 deputies in Compton and the Blue Lives Matter movement as blackness is not a choice but a job is (so much for the Commandment Thou Shall Not Kill); finally some sanity in San Antonio, as the Texas AG announced Chick Fil-A will be offered a lease at the city’s airport.

Chicago/Baltimore Gun Violence: In Chicago as of September 12, 2020, the number of shootings increased to 2,973 of whom 506 have died (total travesty of BLM when blacks are shot and killed by blacks in droves and only sounds of silence and complete absence of any protests in front of City Hall demanding action to curb the killings and shootings); Baltimore with a fraction of Chicago’s population and hoping against all hopes that 2020 will not be a record in terms of deaths but now seems to be shooting less and killing less and is now 272 behind Chicago at 235 murders (when will Chicago and Baltimore get serious about this carnage or is this the case of true racism as a Blue run city turns a deaf ear and a blind eye to the slaughter of people of color by people of color and when will the left focus on the problem of color on color shootings in Blue run cities which  have  been way  more  deadly and way more numerous than shootings by  police or by random mass shootings which occur much less.
As always, I hope you enjoy today’s holidays and observances, factoids of interest for this  day in history, a musical link to “Volare” by Delmonico Modugno,  the fact that you avoid acts which need piacular and quote by F.W. von Meister on the cause of the Hindenburg Disaster, secure in the knowledge that if you want to find a gift for any memorable events like Father’s Day, college graduations, birthdays, weddings, or anniversaries, you know that the Alaskanpoet can provide you with a unique customized poem at a great price tailored to the event and the recipient. You need only contact me for details.
1. Day of the Homeland (Germany)—created by Paul Wagner in 1949 to honor the

shedding of the evils of Germany’s Nazi past and a return to its rightful place as a nation of the arts and philosophers and its return to the treating of its citizens equally.

2. National Celiac Disease Awareness—creating awareness of an immune system disease that makes it impossible for those affected by it to  be able to process protein found in wheat, barley and rye which if consumed will attack the small intestines.

3. 1958 Number One Song— the number 1 song in 1958 on a run of 4 weeks was “Volare (Nel blu pinto di blu)” by Delmonico Modugno Here us a recording of the song:  https://www.youtube.com/watch?v=7wWiC0e3b2I This Italian singer songwriter won song of the year for Volare, went on to appear in 44 movies after suffering a stroke retired from music and became a member of the Italian Parliament to finally leave us on August 6, 1994 at the age of 66.

4. Word of the Day—today’s word of the day is “piacular” which means expiation which describes to a tee what we deserve for the 24/7 ad hominem attacks occurring in the political arena.

5. Up in Flames after 171 Times--celebrating the birth on this day in 1881 of Max Pruss who became after World War I a crew member on passenger Zeppelins and worked his way up to become the captain of the Hindenburg on his 171st trip across the Atlantic when upon trying to moor on May 6, 1937 in bad weather the hydrogen tanks caught fire and it crashed and burned, killing 13 passengers and 22 crewmen but not Pruss who was severely burned but not held responsible and to his death in November 28, 1960 at age 69 claimed the fire was caused by sabotage.

On this day in:
a. 1899 Henry Bliss achieved the dubious distinction of being the first person killed in an automobile accident when he was hit by a taxi as he was getting off a trolley in New York City.
b. 1962 an appeals court in Mississippi ordered the University of Mississippi to admit African-American James Meredith as its first black student which he entered and graduated from.
c. 1977 General Motors introduced the diesel engine into three Oldsmobile Mobiles which had a short lived life and were discontinued in 1985 due to reliability issues.
d. 2001 civilian air travel which had been grounded following the air attacks on 9/11 was allowed to resume service.
e. 2007 the Declaration of Rights of Indigenous Peoples was approved by the United Nations.
Early reflections on the disaster of the Hindenburg after 135,000 trouble free Transatlantic miles: "It is possible that with the dropping of the forward lines from the bow and the stern lines to the ground, static electricity was discharged, and this caused the fire. Also, with the rear gondola engines throttled down for the mooring, sparks often are set off. With the hydrogen gas being valved simultaneously, this could cause both the fire and the explosion." F.W. von Meister, general manager in the United States for the Zeppelin Line.
Please enjoy the poems on events of interest on my twitter    account below (if you like them, retweet and follow me) and follow my blogs. Always good, incisive and entertaining poems on my blogs—click on the links below. Go to www.alaskanpoet.blogspot.com for Ridley’s Believe It Or Not—This Day in History,  poems to inspire, touch, emote, elate and enjoy and poems on breaking news items of importance or go to  Ridley's Believe It Or Not for just This Day in History.

© September 13, 2020 Michael P. Ridley aka the Alaskanpoet
Alaskanpoet for Hire, Poems to Admire
Poet Extraordinaire, Beyond Compare
A Unique Gift, All Recipients to Receive a Lasting Gift

Posted by Michael P. Ridley aka the Alaskanpoet at 10:33 PM