September 10, 2020 Ridley's Believe It Or Not World Suicide Prevention Day

CV USA Cases: New cases of 116,074 with total cases over 6 million at 6,444,645 (a 1.80% increase compared to yesterday’s 1.22% increase) with 2,507,502 active cases of which 14,575, on a downward trend with slight blips from a high of 19,155 on July 23  (14,459 yesterday and 15.881 on September 1), are in serious or critical condition as trend continues to go down, and 4,053,217 closures, 195,785 of which have been deaths (4.83% compared to yesterday’s 4.87%) and 3,857,432 of which have been recoveries (95.17% compared to yesterday’s 95.13%) (our death rate percentages continue to improve and are finally in single digits since Cuomo repealed on May 10 his order sending CV positive patients to nursing homes and ADL facilities and on a deaths per million population measurement at 591 ranks behind Peru (915), Belgium (855), Spain (635), UK (612), Chile (615), Bolivia (611), Ecuador (608), and Brazil (605),  and only slightly worse than Italy (589) and Sweden (578) that never closed its economy down like we did and Mexico (535) which announced it has run out of death certificates due to surge in deaths. We have now conducted 89,969,363  tests (now at 271,496/M compared to Russia at 270,647/M so Trump is telling truth that we conduct more tests in number and on a per capital basis).
Non CV Case News: While the MSM raged that Trump’s attempt to avoid panic over the CV pandemic was deliberate lying and a former AG who really should know better, Kamala Harris went so far as to call Trump’s actions almost criminal; on the Biden mental fitness front, his press secretary refused to answer questions whether he was using a teleprompter while answering voters’ questions when it appeared he was asking staff to adjust it; the rhetoric against Trump knows no normal restraint as Carl Bernstein with a straight face solemnly proclaims Trump’s acts on CV is the “greatest presidential felony” and Alyssa Milano contributes her biased two cents that all members of the GOP should be prosecuted (when will the dog whistle of over the top rhetoric end?); on the election front, Reds in Pennsylvania have added 198,000 new voters while Blues only 26,000 and in Texas a federal judge has ruled that if a mail in ballot is rejected due to disqualifying irregularities a letter must be sent out within one day notifying a voter of rejection and giving a rejected voter a chance to contact by phone to correct the irregularity (Reds are still claiming universal mail in ballots are a recipe for voting fraud); Blues in the Senate are still in CV Stimulus Scorched Earth mode as Senate’s $300 billion relief bill failed 52-47 with all Blues voting no to even proceed to considering amendments; California is no longer alone battling a growing number of wildfires as Oregon and Washington are being hit; here is an example which fortunately, although it may look like it, is not the Golden Gate Bridge but rather a hillside near the Bidwell Bar Bridge in Orville, California: 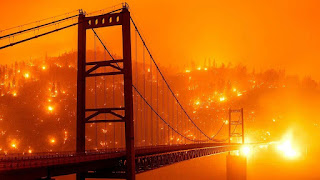 160 CEOs of major corporations in NYC are pleading with Mayor De Blasio to immediately address the crime and quality of life issues that are driving residents to flee the city in droves.

Chicago/Baltimore Gun Violence: In Chicago as of September 9, 2020, the number of shootings increased to 2,923 of whom 497 have died (total travesty of BLM when blacks are shot and killed by blacks in droves and only sounds of silence and complete absence of any protests in front of City Hall demanding action to curb the killings and shootings); Baltimore with a fraction of Chicago’s population and hoping against all hopes that 2020 will not be a record in terms of deaths but now seems to be shooting less and killing less and is now 269 behind Chicago at 228 murders (when will Chicago and Baltimore get serious about this carnage or is this the case of true racism as a Blue run city turns a deaf ear and a blind eye to the slaughter of people of color by people of color and when will the left focus on the problem of color on color shootings in Blue run cities which  have  been way  more  deadly and way more numerous than shootings by  police or by random mass shootings which occur much less.
As always, I hope you enjoy today’s holidays and observances, factoids of interest for this  day in history, a musical link to “The Yellow Rose of Texas” by Mitch Miller and His Orchestra,  the fact that you abhor the phrenis we are witnessing during the election season and a quote by Joseph-Ignace Guillitin on the benefits of the guillotine he had invented, secure in the knowledge that if you want to find a gift for any memorable events like Father’s Day, college graduations, birthdays, weddings, or anniversaries, you know that the Alaskanpoet can provide you with a unique customized poem at a great price tailored to the event and the recipient. You need only contact me for details.
1. World Suicide Prevention  Day—created by the International Suicide Prevention Association and observed since 2003 to promote awareness of the extent of suicide and promote effective means to combat it.

2. International Creepy Boston Dynamics Robotic Horse—celebrating the day in 2012 that two prototype robotic horses designed to carry 400 pounds of equipment for Marines up to 20 miles was first tested. Mules if they desired the job could rest easy as the Marines decline to move forward with the program.

3. 1955 Number One Song— the number 1 song in 1955 on a run of 5 weeks to the joy of all Texans  was “The Yellow Rose of Texas” by Mitch Miller and His Orchestra and only number 1 hit song. Here us a recording of the song: https://www.youtube.com/watch?v=aSW-1QKL-aE Mitch Miller was an oboist and successful conductor in the 50’s and 60’s and perhaps unique in the entertainment business was married to 1 wife for 65 years and finally had his baton taken away for good on July 31, 2010 at the age of 99.

4. Word of the Day—today’s word of the day is “phrenis” which means delirium, frenzy which describes the reaction of the MSM to the Trump administration.

5. The Reptilian Brain Stops Here--celebrating the birth on this day in 1949 of noted author, journalist and television journalist Bill O’Reilly who was with Fox News for 21 years, 16 of which while hosting the O’Reilly Factor which was the nation’s number 1 Cable News show but sadly 6 sexual harassment settlements totally $50 million resulted in his termination from Fox on April 19, 2017.

a. 1987 in an example of our sometimes violent past, some 300 unarmed supporters of a miners’ strike by the newly formed United Mine Workers marched to the Latimer Mines in Hazleton, Pennsylvania which was open and operating and were met by a posse of sheriff’s deputies who opened fired on the marchers killing 19 and wounding scores many in the back trying to flee.

b. 1967 the residents of Gibraltar in a referendum voted to remain British and not join Spain.

c. 1977 in France Hamida Djandoubi convicted of murder, torture and rape on February 24,1977 obtained the dubious distinction of being  the last person executed by the guillotine.

d. 2008 the Large Hadron Collider at CERN was powered up at Geneva, Switzerland.

e. 2017 Hurricane Irma the first of a one two Irma Maria hurricane punch made landfall in the Florida Keys as a CAT4 and when it dissipated 4 days later along the Eastern Seaboard it had killed 92 people and caused $50 billion in damages.

Reflections on the guillotine:  My machine will take off a head in a twinkling and the victim will feel nothing but a refreshing coolness. We cannot make too much haste, gentlemen, to allow the nation to enjoy this advantage.”Joseph-Ignace Guillotin, Statement to the French Assembly. Unlike the firing squad where the condemned was blindfolded to not see the gunfire, doubt if the condemned were given ear plugs so they would not hear the sound of the blade hurling toward their neck.

© September 10, 2020 Michael P. Ridley aka the Alaskanpoet
Alaskanpoet for Hire, Poems to Admire
Poet Extraordinaire, Beyond Compare
A Unique Gift, All Recipients to Receive a Lasting Gift

Posted by Michael P. Ridley aka the Alaskanpoet at 6:26 PM