Ridley’s Believe It Or Not For July 14, 2020
CV World: The CV pandemic across the planet continues  with 213,675 new cases  (a 1.63%  increase compared to a 1.4% increase yesterday) to bring the total to over 13 million at 13,341,466 cases, 4,975,293   of  which  are active, 8,366,173 of which have been closed with 7,788,210 recoveries (93.09% compared to  yesterday’s 93.02%) and 577,963   deaths (6.91% compared to yesterday’s 6.98%).
CV USA: New cases of 69,005 with total cases of 3,438,627 (a 2.01% increase compared to yesterday’s 7.67% increase) with 1,803,381 active cases of which 15,949 (15,813 yesterday) are in serious or critical condition, an increasing stat that is troublesome and 1,704,251 closures, 138,700 of which have been deaths (8.14% compared to yesterday’s 8.32%) and 1,565,551 of which  have been recoveries (91.86%  compared to yesterday’s 91.68%) (our death rate percentages continue to improve and are finally in single digits since Cuomo repealed his order sending CV positive patients on May 10 but remain higher than the world probably due to idiots like Cuomo sending positive CV patients into nursing homes to infect the residents and staff who then die and accounted for some 40% of our deaths with 44,030,877 tests (so much for Biden’s claim of lack of testing by Trump and implications Trump is slowing testing to hide CV increases).
Non CV News: Hillary continues to be the unwanted guest that refuses to leave, blasting Trump for the CV pandemic response and his attack on voter fraud and implying on sycophant Noah Webster’s show that he won’t go “quietly” if he loses (she still cannot get over the fact that she lost in 2016 and probably will take that delusion to her grave); senior columnist Bari Weiss at “All the News Fit to Print (as long as it favors left and DNC) NYT has resigned with a scathing resignation blasting the left’s hostile workplace being bullied and slammed as a Nazi; Jody Rosen, an op ed writer for the L.A. Times has suggested that the “Star Spangled Banner” be replaced as our national anthem with songs like “Lean on Me” or “This Land Is Your Land”; a $40 bottle of beer that was supposed to denounce racism has been pulled from a Connecticut bar after a patron complained it supported the KKK: 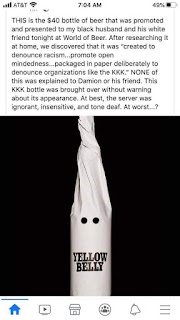 Posted by Michael P. Ridley aka the Alaskanpoet at 8:49 PM