Ridley’s Believe It Or Not For September 15, 2019 Michael Horowitz has delivered his preliminary report on the FBI’s involvement in the FISA warrants concerning the Trump campaign and there is growing speculation that Comey and McCabe face felony prosecution as House McCarthy railed against “the closest thing to a coup we have ever seen” (hope the sanctimonious FBI enjoyed his book tour and media spotlight which will not be good preparation for time in prison); the New York Times is on the uncorroborated warpath again publishing an account from Robin Pogabrim and Kate Kelley from their upcoming book that a Clinton confidant Max Steir saw Kavanaugh’s penis while drunk being pushed into the hands of a woman during a college party (sadly the Sullivan case while shield these book promoting “journalists” from defamation suits that Trump has suggested Kavanaugh file and ever more sadly Warren, Harris and Castro are demanding Kavanaugh be impeached for an uncorroborated event on which any potential criminal liability would have long since be barred by the statute of limitations); interesting that these allegations have surfaced after Ford’s lawyer revealed that his client’s motivation was to hobble Kavanaugh by placing an asterisk of confirmation against his name; in a chilling reminder of how dangerous the cartels in Mexico are 44 bodies of Mexicans were found in plastic bags stuffed in a well in Mexico; in a moment revealing how little we know about life in our oceans, Oscar Lundahl while fishing off the coast of Norway caught this strange fish in 2600 feet of water: 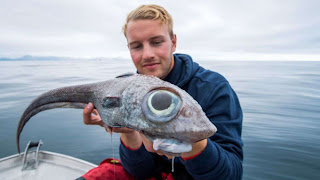 Joe is back in the social media doghouse for embellishing an encounter he had with a black gang leader while a lifeguard in 1962 over an account of his grabbing a chain and causing three blacks armed with straight edge razors to back down outside a municipal pool (shades of Walter Mitty); AOC is back to her Chicken Little sprees claiming Miami is a few years will be swept under the rising seas (when will the good people in the Queens listening to her rants tire and in 2020 force her to retire); the cries of a failing campaign for O’Rourke get more strident every day pitching he’s going to take all semi-automatic rifles away; John Legend may have tarnished his legend by slamming the fact that Felicity Huffman received 14 days as opposed to none for her role in her child’s college admissions scandal; Iran whose credibility on terror is below zero has denied responsibility for the drone attacks on Saudi Arabia’s oil production facilities (anyone who believes that must believe in the tooth fairy and with his comments that we are “locked and loaded” to deal with Iran if they are responsible, it does not seem he believe these liars also); in Chicago through September 14, 2019, 2007 have been shot of whom 341 have died and in Baltimore with a fraction of Chicago’s population, 245 have been murdered in Baltimore (when will Chicago and Baltimore get serious about this carnage or is this the case of true racism as a Blue run city turns a deaf ear and a blind eye to the slaughter of people of color by people of color and when will the left focus on the problem of color on color shootings in Blue run cities which have been more deadly and more numerous than random mass shootings?
As always, I hope you enjoy today’s holidays and observances, a music link to Fred Astaire, factoids of interest for this day in history, the fact that you are blessed with an absence of a polysacrous frame, and a relevant quote on battling cancer by Mr. T, secure in the knowledge that if you want to find a gift for any memorable events like Father’s Day, college graduations, birthdays, weddings, or anniversaries, you know that the Alaskanpoet can provide you with a unique customized poem at a great price tailored to the event and the recipient. You need only contact me for details.
1. International Day Of Democracy—created by the U.N. General Assembly in 2007 to promote the ideals of democracy in a world in which too many tyrants and dictators rule and anti-democratic forces lie in wait to destroy democratic forms of government,
2. Lymphoma Awareness Day—created by the Lymphoma Coalition, a non-profit association of 63 lymphoma patient groups in 44 countries, in 2004 to promote awareness of the disease and raise funds for research and cure of the disease which is potentially life threatening and infects some 1000 people a day.
3. 1935 Number One Song— the number one song in 1935 on this day was “Cheek to Cheek” by Fred Astaire.  Here is a recording of the song: https://www.youtube.com/watch?v=WOYzFKizikU.
4. Word of the Day—today’s word of the day is “polysacrous” which means obese which is not the shape you want your body to be in.
5. The Poet Laureate Of TV—celebrating the birth on this day in 1918 of noted African-American comedian, actor and game show panelist noted for his 4 line poems as a panelist whose rhymes left him on October 2, 2005 from cancer.
On this day in:
a. 1950 in what would be regarded as the high water mark of his generalship, Allied Forces under the leadership of Douglas MacArthur landed to the rear of North Korean Communists trying to drive American and South Korean forces into the sea.
b. 1963 in a dark day for race relations, 4 members of the Klu Klux Klan exploded dynamite at the 16th Street Baptist Church killing 4 young African American girls and wounding 22 others.
c. 1967 after a sniper attack by Charles Whitman on August 1, 1966 from the top of the Texas Tower at the University of Texas Campus that killed 14 people, in a better late than never moment, Lyndon Johnson wrote a letter to Congress requesting it pass gun control legislation.
d. 1981 the Senate Judiciary unanimously voted in favor of confirming Sandra Day O’Connor as the first female Justice of SCOTUS.
e. 2008 as the financial crisis kept on expanding, Lehman Brothers filed for bankruptcy, the largest bankruptcy in the U.S. at that time.
Reflections on fighting and being a cancer survivor: “I thought I was tough, but going through cancer, that was tough. Cancer patients are really tough--they don’t quit. That’s why I wear it like a badge of honor. I am proud to be a cancer survivor.” Mr. T., noted actor on the “A-Team.”
Please enjoy the poems on events of interest on my twitter account below (if you like them, retweet and follow me) and follow my blogs. Always good, incisive and entertaining poems on my blogs—click on the links below. Go to www.alaskanpoet.blogspot.com for Ridley’s Believe It Or Not—This Day in History, poems to inspire, touch, emote, elate and enjoy and poems on breaking news items of importance or go to  Ridley's Believe It Or Not for just This Day in History.
© September 15, 2019 Michael P. Ridley aka the Alaskanpoet
Alaskanpoet for Hire, Poems to Admire
Poet Extraordinaire Beyond Compare
The Perfect Gift, All Recipients to Receive Lasting Lift

Posted by Michael P. Ridley aka the Alaskanpoet at 8:20 PM