Just when you thought the left could not stoop any lower into the gutter of slime
Along comes Kathy Griffin looking like she wants to incite an assassination crime
Holding up like a proud ISIS fanatic a blood stained Donald Trump head
Message clear without any words needing to be said
If a canine I would hear the dog whistles calling the “martyrs” on the left to behead
Trump is an infidel to the left and must not remain alive he needs to be dead
What has this world come to with the left proclaiming death to the chief of the Reds?
Rather than unrestrained, unchecked hate and bias what ever happened to civility and debate instead?
No wonder the mere mortals outside the Swamp and the Beltway politicians and bureaucrats dread
This is a great country due to its freedom of speech but this time this “comedian” has crossed the line and should have the riot act read
Before people start getting injured it is time to tone down the rhetoric and this bias, hate and potential violence by the left shed 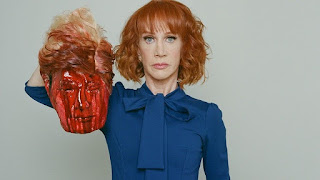 © May 30, 2017, Michael P. Ridley aka the Alaskanpoet
Alaskanpoet for Hire, Poems to Admire


Poet Extraordinaire Beyond Compare
The Perfect Gift, All Recipients to Receive Lasting Lift
Posted by Michael P. Ridley aka the Alaskanpoet at 4:19 PM