December 21, 2018 Ridley's Believe It Or Not Winter Solstice

Ridley’s Believe It Or Not For December 21, 2018 As the rancor over a looming government shutdown heats up, the nation enters the first day of winter with it looking more and more likely that there will not be enough senators in town to give Republicans funding for a wall (are there any Democrats left who will put the security of this nation ahead of Chuck Schumer’s personal animus against Trump and vote for wall funding?); Rep. Gutierrez, a partisan biased political hack, berated for his questioning time Secretary of Homeland Security Kirstjen Nielsen then left the hearing room when she attempted to respond (what a rude pathetic idiot); disgraced former Governor of New York Eliot Spitzer who resigned due to his use of high priced prostitutes has been hit with a charge by high priced Russian prostitute that he used a suitcase to smuggle her in to his apartment; Filipina immigrant Jessica Arong O’Brien who became the first Filipina female judge in Cook County has been sentenced to a year in jail for her role in  a $1.4 mortgage fraud scheme; 85 year old Justice Ruth Ginsburg who looks like she is on life support has had two cancerous lumps removed from her lungs (wish her a speedy recovery but the left should be in panic mode that she will not be long on the bench, giving Trump the right to appoint another conservative judge); Rob Reiner, a total leftist has gone off the rails, in a profane tweet claiming Trump is committing treason (a little civility Rob would be appreciated); Sanders and Ocasio-Cortez ought to take notice of the economic disaster in Venezuela as its failed socialist policies are forcing women into prostitution to make ends meet; Emanuel’s announcement that he will not seek reelection has not curbed the gun violence as through December 20, 2018, 2880 people mostly of color have been shot by mostly people of color, of whom 488 have died (when will Chicago get serious about this carnage or is this the case of true racism as a Blue run city turns a deaf ear and a blind eye to the slaughter of mostly people of color by mostly people of color).
As always, I hope you enjoy today’s holidays and observances, a music link to Olivia Newton-John, factoids of interest for this day in history, the fact that you are not acting in a way that merits an obloquy and a relevant quote from George R.R. Martin on winter, secure in the knowledge that if you want to find a gift for any memorable events like college graduations, birthdays, weddings, or anniversaries, you know that the Alaskanpoet can provide you with a unique customized poem at a great price tailored to the event and the recipient. You need only contact me for details.
1.  Winter Solstice—celebrating at 2:23 p.m. the official start of winter and the shortest day of the year as tomorrow more sunshine will daily greet us.
2. National Crossword Puzzle Day—celebrating that great game and anti dementia pastime, the crossword puzzle, which first appeared in England in the 19th Century and are now a staple feature of any newspaper.
3. 1981 Number One Song— the number one song in 1981 on a run of 10 weeks in that position was “Physical” by Olivia Newto-John who is fighting her third diagnosis of cancer, this time at the base of her spine. Here is a recording of the song: https://www.youtube.com/watch?v=vWz9VN40nCA
4. Word of the Day—today’s word of the day as we move from words beginning with “n” to words beginning with “o” is “obloquy” which means censure or disgrace which describes what the behavior of Paul Ryan merits on the issue of border security as the government faces a partial shutdown.
5. Triple AAA on Display--celebrating or bemoaning depending on your political views the birthday on this day in 1937 of Hanoi Jane Fonda vilified for her visit to North Vietnam in support of the regime in its war against the U.S. to be  captured in a classic photo sitting in a triple AAA gun in Hanoi while American airmen were rotting and being tortured in the Hanoi Hilton: 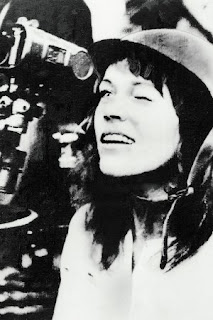 On this day in:
a. 1620 The Mayflower landed at Plymouth Rock, Massachusetts to disembark William Bradford and the Mayflower Pilgims.
b. 1937 Snow White and the Seven Dwarfs, the world’s first animated full length feature, premiered at the Carthay Circle Theater in Los Angeles.
c. 1967 Louis Washkansky the first human to receive a human heart transplant from a girl rendered brain dead from a collision with a drunk driver died 18 days after the surgery in Cape Town, South Africa.
d. 1998 a bomb planted by Libyan operatives exploded on Pan Am Flight 103 over Lockerbie, Scotland killing all aboard and 13 people on the ground.
e. 1995 the city of Bethlehem passed from Israeli control to Palestinian.
Reflections on winter: “My old grandmother always used to say, 'Summer friends will melt away like summer snows, but winter friends are friends forever.” — George R.R. Martin, noted American author who has been called the American Tolkien.
Please enjoy the poems on events of interest on my twitter account below (if you like them, retweet and follow me) and follow my blogs. Always good, incisive and entertaining poems on my blogs—click on the links below. Go to www.alaskanpoet.blogspot.com for Ridley’s Believe It Or Not—This Day in History, poems to inspire, touch, emote, elate and enjoy and poems on breaking news items of importance or go to   www.Alaskanpoethistory.blogspot.com for just This Day in History.
© December 21, 2018,  Michael P. Ridley aka the Alaskanpoet
Alaskanpoet f5 Hire, Poems to Admire
Poet Extraordinaire Beyond Compare

Posted by Michael P. Ridley aka the Alaskanpoet at 2:25 PM