In football with passing, catching and running skills he is known as the triple threat
Florence with 4 deadly threats is feared to be the strongest hurricane yet
Florence is bringing winds, flooding, excessive flooding and storm surge
As coastal residents finally get the message and from the Carolina coast are purged
Waves as high as 83 feet in the Atlantic are being formed heading toward the shore
Expected to be the costliest hurricane yet with billions to rebuild and restore
Ride this one out as the waves come crashing in will be more like suicide
With a storm surge of 9-13 feet above the storm tides
Stilts and sandbags may not the effects of this hurricane begin to cope
Evacuation and evacuation now may be the only survival hope
A massive storm but in the divisive the politicized climate come under the anti-Trump sway
Trump is blamed for being complicit as the MSM has a Trump bashing field day
Blaming him for climate change that is creating this monstrous hurricane mess
When they should be concentrating on how to help victims deal with this distress
© September 12, 2018 Michael P. Ridley aka the Alaskanpoet 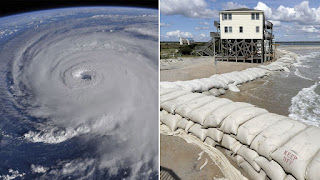 A wall three sandbags high will not stop a 9-13 storm surge or the waves much higher that may be crashing onto the beach stripping away the foundation. Hope those residents have left

Posted by Michael P. Ridley aka the Alaskanpoet at 4:23 PM