One of the iconic photographs of 9/11/2001 is that of Mike Kehoe of NTFD Fire Department 28 climbing the stairs of the World Trade Center as terrified tenants and visitors are streaming down to safety. His courage and the courage of all first responders should never fade from our memory as should our resolve to fight terror wherever it exists be always be met with determination to wipe it off the face of the Earth, 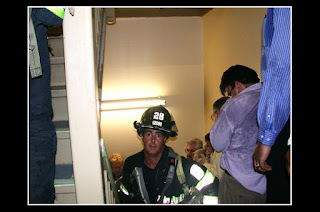 His helmet bears a 28 burdened by 100 pounds of gear heading up a panic flight of stairs.
At 20 floors, his eyes are framed in soot and ash, a deer in a hunter’s headlight stare.
Outnumbered by a cascade of office horror in downward panic flight.
Most men would have tired, been brushed away, but not with a 5 alarm inferno to fight.
Was it the training, or the inner steel of the highest of all noble human traits?
To not abandon crew and total strangers to a searing, deadly fate.
Not since Operation Typhoon, have we seen planes driven at targets to explode,
Even then, only against warriors— who among us could ever fathom such a Bushido Code?
A micro globe of innocents whose sin was to be at work, bathed in high octane flames,
Desert sand chrysantimums hijacking a one way ticket passenger laden plane.
How could he or would we ever have the courage to put ourselves in harm’s way,
Climbing 8 more floors in smoke, until at 28, the building rumbled and began to sway?
As a parent most of us to a man would with relish sacrifice all to save his child,
Or to protect a spouse faced with mortal dangers running near and wild.
But these were strangers, not neighbors, kin or friends, but with his life and limb in doubt,
What courage to continue climbing burdened down and fight the urge to flee and get out.
It is said that true heroes in combat are those not in photos or who never make it home for the victory parade,
Now joined by 343 resting eternally in fields far and near within the memories of the living, never to fade.
28 could have stopped then and there at 20 floors and put himself out of danger of deadly harm,
But like true heroes, no fireman will turn tail and run from the pleading of five alarms.
Those who do not know us, say America is a soft land with heroes too few and too far between,
At their peril, if they ever forget the image of 28 trudging up the stairs into danger’s mortal scene.
If the helmet was any number from ladder 1 to 176 frozen in that famous photo frame,
The courage to climb into harm’s way to save a stranger’s life and not flee would be exactly the same,
Whether there is an eternal heaven or an eternal flame, one will never know for sure,
Or whether to avoid the fires, one’s spirit must be helping, noble and pure,
If there is, be assured 343 firemen of NYFD will hose down daily the streets of paradise,
Sweeping into the gutters of hell those who would in the name of God cause the innocents’ early demise.
If there is, it is certain that after 911, no NYFD member would ever be admitted into hell,
For too quickly on earth the brimstone sermons would end, as the Devil’s damning fires they would quickly quell.


Posted by Michael P. Ridley aka the Alaskanpoet at 9:40 PM