Ridley’s Believe It Or Not For August 5, 2017 In political debates a telling symbol is the empty chair, an optic that shows the absent candidate is either afraid or doesn’t care which with the Senate MIA on recess without repealing Obamacare or making any progress on tax reform merits our total scorn and derision (McConnell is a complete failure as a Senate Majority as the chief Blue Swamp denizen has stalled him at every turn); 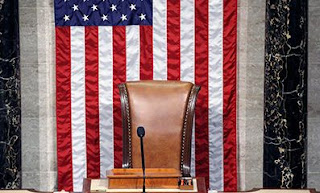 in the race to be the most despised Blue House member Maxine Waters the absentee plantation owner is pulling ahead of Nancy Pelosi with her appearance on The View applauding and encouraging the treasonous leaks of classified information including transcripts of Trump’s conversations with presidents of Mexico and Australia (talk about a show with the clueless questioning a guest who is totally clueless and a poster child for the need to have term limits); Comey’s side kick and long term friend Robert Mueller’s investigation is spreading like a virulent cancerous tumor beyond the Russian Collusion Delusion to Flynn’s dealings with Turkey and Trump’s finance all the while ignoring Lynch’s involvement in the “investigation” and the quid pro quo scandal of the Clintons and the Clinton Foundation (if anyone believes that Clinton and Lynch talked only about golf and grandchildren when the most likely topic was Bill’s message that Lynch could stay on as AG or be appointed to SCOTUS if HRC would be elected which could not happen if she were to face a recommendation for indictment by the FBI is a complete and total idiot); the fact that the MSM will go to any lengths to attack Trump for the littlest excuse was exemplified when the Boston Globe attacked him and his family for vacationing at Trump’s golf course in New Jersey instead aping Obama and Kennedy and going to Martha’s Vineyard (Newsweek not to be outdone has on its cover Trump in a recliner with the caption “Lazy Boy” –what a distortion of reality but so typical of that left wing rag good only as paper to start campfires); instead of spending its scarce resources on ending the minority on minority killings in Chicago and complying instead of obstructing immigration laws, Rahm Emmanuel who masquerades as a mayor is suing the feds over its decision to withhold funds over Chicago’s sanctuary city status (the false narrative that one needs sanctuary city status to encourage illegal aliens to report crime could be shredded by a simple change in policy that like someone who reports an OD will not be charged with drug use an illegal reporting a crime will not be deported unless he or she is a criminal also; in another example of insanity the Security Council unanimously adopted more sanctions that if observed would reduce North Korean exports by one third; through August 4, 2017, 2233 people have been shot in Chicago 385 of whom have died.
As always, I hope you enjoy today’s holidays and observances, a music link to Destiny’s Child, factoids of interest for this day in history, a relevant quote by Anurag Prakesh Ray on traffic lights and life, knowing that the 535 Gang’s leaving the Swamp is irremissible,  secure in the knowledge that if you want to find a gift for any memorable events like weddings, or anniversaries, you know that the Alaskanpoet can provide you with a unique customized poem at a great price tailored to the event and the recipient. You need only contact me for details.
1. International Traffic Light Day—commemorating the installation of the first electric traffic signal which was installed in Cleveland, Ohio on this day in 1914 and which have grown to fairly sophisticate signals linked to sensors and the existence or non existence of pedestrians to speed up the flow of traffic over increasingly congested roadways.
2. Mead Day—created by the American Homebrewers Association in 2002 to celebrate and promote mead perhaps one of the oldest know fermented beverages.
3. 2001 Number One Song—the number one song in 2001 on a run of 2 weeks in that position was “Bootylicious” by Destiny’s Child. Here is a performance by the group of the song:  https://www.youtube.com/watch?v=jTVNS4u6VXc
4. Word of the Day—today’s word of the day is “irremissible” which means unpardonable which describes gridlock and lack of partisanship from the elitist gang of 535 to a tee.
5.  Ace Trumped by a Four—celebrating the birth on this day in 1946 of blond bombshell actress and beauty queen winner Loni Anderson who met Burt Reynolds while starring with him in the movie Stroker Ace  and then married him for her third marriage only to after several years later  divorce him and remarry for the fourth time Bob Flick, cofounder of the Brothers Four in 2008.
On this day in:
a. 1305 William Wallace so aptly portrayed by Mel Gibson in the movie Braveheart was captured by the English near Glasgow to be transported to London, tried and then executed.
b. 1583 the first English colony in North America was established at St Johns, Newfoundland.
c. 1816 the British Admiralty dismissed the first working electric telegraph invented by Francis Ronalds as unnecessary as they preferred to continue to use the semaphore.
d. 1861 in order to finance the Civil War the U.S. adopted the Revenue Act of 1861 which imposed an income tax of 3% on all incomes over $800 ($21,134 in today’s dollars) and in what has to be a first of the federal government repealing a tax, repealed it in 1872.
e. 2012 in yet another example of ineptitude at the EPA, the EPA accidentally discharged into the Animas River in Colorado, 3 million gallons of highly toxic tailings from the Gold Creek Mine (not surprising after reports of EPA staffers spreading feces on the walls of its offices in Denver).

Reflections on life and traffic lights: “I wish life had traffic lights, it would tell us when to go for it, when to be careful, and when to just stop.” Anurag Prakash Ray, noted Indian Process Associate at SDM private limited. On this one Ray is a little off the mark as there are aka honesty, conscience, instinct, experience and integrity.  Please enjoy the poems on events of interest on my twitter account below (if you like them, retweet and follow me) and follow my blogs. Always good, incisive and entertaining poems on my blogs—click on the links below. Go to www.alaskanpoet.blogspot.com for Ridley’s Believe It Or Not—This Day in History, poems to inspire, touch, emote, elate and enjoy and poems on breaking news items of importance or go to Ridley's Believe It Or Not for just This Day in History.

© August 5, 2017, Michael P. Ridley aka the Alaskanpoet
Alaskanpoet for Hire, Poems to Admire
Poet Extraordinaire Beyond Compare
The Perfect Gift, All Recipients to Receive Lasting Lift

Posted by Michael P. Ridley aka the Alaskanpoet at 1:44 PM