Protect Us From Illegal Aliens

Americans are rightfully concerned over the ISIS Homeland threat
Not from jihadists pouring across our borders but from homegrown jihadists whose martyrdom wishes are dead set
Images of Americans yelling Allah Akbar trying to innocent Americans kill
Gives all of us Americans a deadly chill
Another threat to the Homeland this Administration sadly continues to ignore
It doesn’t need the internet to radicalize, it is breaking down our very door
Drugs and felons and violent illegal aliens that rape and kill
While this Administration to secure the border lacks the political will
Anarchy in the cities and states runs unchained
Total refusal to illegal aliens arrested detain
Over a hundred innocents killed by these scum
How many more of us have to these felons have to succumb?
Before any city official who wants to give sanctuary to those aliens who continue to commit crime
Is rounded up and thrown into a federal prison to serve serious time?
We tried a Confederation and surprise it did not work
Now with sanctuary cities anarchy with respect to immigration runs beserk
Willie Horton was the face that blew the Dukakis chance for presidency away
Here is the mug shot of Ramirez after Marilyn Pharis he decided in her home to slay
Obama has once again blood on his hands as does Brown and every sanctuary city mayor
Hillary due to her silence on the issue also has blood on her hands to share
Too many Blues in their quest for future Hispanic votes
No longer feel our safety is a cause their concern to devote
Remember this face and the many more illegal alien felon faces to sadly appear
Come November when you ponder to what candidate your vote you will steer 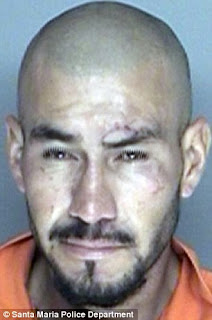 © August 13, 2015, Michael P. Ridley aka the Alaskanpoet
Alaskanpoet for Hire, Poems to Admire


Poet Extraordinaire Beyond Compare
Rhymes for All the Memorable Times
The Perfect Gift, All Recipients to Receive a Lasting Lift
Posted by Michael P. Ridley aka the Alaskanpoet at 4:04 PM