February 17, 2021 Ridley's Believe It Or Not National PTA Day

US Vaccinations: In the U.S. as of 2/17/2021 57.4 million doses have been given, 1.61 million per day in the last week (sounds impressive but if the rate does not increase it will take us some 9 months to have 75% of the population vaccinated which many believe is necessary to develop herd immunity. In California 6,435,184 total doses have been given (up to 76.5% of doses received), but typical of Newsom’s ineptness and because more than 1.5 million recall signatures have been turned in, due to the power of growing signatures on his recall petition, California has  fallen back and is now at 36th  out of 50 in terms of the percentage of doses administered as a percentage of doses delivered to the states. A long way to go to get herd immunity and little improvement relative to other states and a great reason to recall this inept governor. As of 2/17/2021 in California we have reduced hospitalizations to 8,855/M with COVID-19 patients hospitalized occupying 15.1% of all hospital beds.

Non CV Case News: Conservatives lost one of their great voices today as Russ Limbaugh died from Stage 4 Lung cancer (his passing will be missed by many but not those of the left were quick to rant and bemoan his “racist, misogynist, and conspiracy attacks”); in a typical anti leftist attack on his last show on February 2, 2021 he warned Biden that his policies against the American worker will cause them to turn on him and the Blues big time but hopefully for Reds those words were ignored by Biden; Cuomo’s arrogance is going to be put to the test as reports are confirming that the FBI and DOJ are investigating the handling of the pandemic by Cuomo and his administration; Texas is reeling under the deadly effects of a brutal winter storm that has put vast amounts of the state into a deep freeze with millions without power for heat as wind turbines froze up and quickly went off line; Bette Midler proved once again she has no sanity or empathy as she spitefully claims the freeze is God’s punishment for having officer holders like Cruz and Cornyn; the MSM is shying from the Lincoln Project Scandal like the plague as the number of sexually harassed men grows and the amount of money lining co-founders’ pockets likewise; as a recall election of Gavin Newsom appears more and more certain, our one party legislature has passed a law requiring a ballot to be mailed to all active registered voters whether requested or not which should make the hurdle in electing a Red replacement governor much higher; pseudo journalist John Sullivan who not just filming the storming of the Capitol but by filming inciting the protesters to do more has been arrested and has been paid $35,000 each by CNN and MSNBC for his films; signature drive continues to insure a recall in the event that any of the 1.5 million signatures already received are not valid to insure Newsom is put on a recall ballot where he needs to be given his unmitigated ineptness: https://recallgavin2020.com/petition/

Chicago Gun Violence: HeyJackass.com is back to show that through February 16, 2021,  gun violence involving mostly persons of color shooting persons of color in Chicago is alive and well with 349 persons shot of whom 75 have died.

As always, I hope you enjoy today’s holidays and observances, factoids of interest for this day in history, a musical link to “Love Yourself” by Justin Bieber, the fact that there still are many in this country who oppose the querken coming out of the Swamp and a quote from Bobby Bones on the PTA, secure in the knowledge that if you want to send a gift for any memorable events like Father’s Day, college graduations, birthdays, weddings, or anniversaries, you know that the Alaskanpoet can provide you with a unique customized poem at a great price tailored to the event and the recipient. Please contact me for the details on the pricing.

1. National PTA Founders’ Day—commemorating the founding on the this day in 1897 the founding by Alice McLellan Birney and Phoebe Apperson Hearst of the Congress of Mothers, the precursor to the National PTA which merged with the National Congress of Colored Parents and Teachers founded by Selena Sloan Butler in Atlanta, Georgia to form the largest school children educational advocacy group in the nation who must be agonizing over the struggle to reopen our schools.
2. Ash Wednesday—celebrated in the beginning of Lent 46 days from Easter Sunday.

3. 2016 Number One Song—the number 1 song in 2016 on this day with a run of 2 weeks in that position not continuous was “Love Yourself” by Justin Bieber to join 10 other number 1 songs. Here is a recording of Justin Bieber singing “Love Yourself”: https://www.youtube.com/watch?v=oyEuk8j8imI Bieber is a 26 year old Canadian singer who became the youngest male singer of all times to have an become a number one and after some run ins with the law and alcohol seems to have acquired some needed even keel.

4. Word of the Day—today’s word of the day is “querken” which means to stifle or suffocate which describes too often what the edicts coming from the Swamp or Sacramento do to our economy.

5. Close But No Super Bowl Ring--celebrating the birth on this day in 1949 of Dennis Green, noted college football college coach, including Northwestern and Stanford, and professional coach who was one of the winningest professional coaches in the 90’s but his 15-1 Minnesota Vikings were upset by the Atlanta Falcons and failed to play in the Super Bowl. His game plan for life fell short on July 22, 2016 from a fatal cardiac arrest.

a. 1600 his way to be burned at the stake for heresy, at Campo de Fiori in Rome, the philosopher Giordano Bruno had a wooden vise put on his tongue to prevent him continuing to speak what the Catholic Church was afraid to have anyone hear.

b. 1913 the Armory Show, the first exhibition of modern art in the U.S., opened in New York City displaying the works of many artists like Pablo Picasso, Claude Monet, Auguste Rodin, Vincent Van Gogh, and Paul Gauguin who would achieve great artistic fame in the 20th Century: 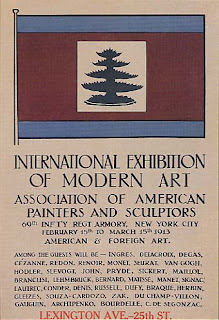 c. 1972 total sales of the Volkswagen Beatle surpassed those of the iconic Ford Model T.

e. 2011 in what would prove to be the beginning of the end of the dictatorship of and life of Muammar Khadafy, Libyans began protesting his rule.

Reflections on the PTA: "My grandmother adopted me for a while, and I was bouncing around a bit. I was always helped by the PTA and church groups with food and Christmas presents. It's a hard cycle to break, because when you don't have the resources, it's almost impossible.” Bobby Bones, noted radio announcer and mentor on American Idol.

Posted by Michael P. Ridley aka the Alaskanpoet at 2:05 PM