The Iditarod tightens up big time as father 56 yr. old Mitch Seavey has pulled into White Mountain only 77 miles away from Nome after averaging 8.54 miles per hour from the prior checkpoint with a mere 1 hour and 59 minute lead over his son Dallas and another 13 minutes more over the third place musher Nicolas Petit. Joar Ulsom and Jessie Royer, the leading female are out of Elim but running out of snow to catch either of the Seaveys it what could end as a photo finish. Here is a photo of Mitch Seavey entering White Mountain in the cold early morning hours (note the miner’s lantern to be able to race during the darkness and the fur parka to stay warm in the below freezing climate).
Another update later this morning on what should be the last day before a winner will be announced. 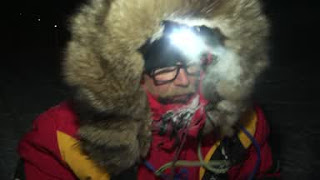 Posted by Michael P. Ridley aka the Alaskanpoet at 4:41 AM