US Vaccinations: In the U.S. as of 3/17/2021 117 million doses have been given, 2.47 million per day in the last week (sounds impressive but if the rate does not increase it will take us now reduced to some 5 months to have 75% of the population vaccinated which many believe is necessary to develop herd immunity. In California 13,161,027 total doses have been given (74.7% of doses received to again remain below U.S. average of 76.6%), but with the pressure of a certain recall coming endangering Newsom, California has moved up from 42nd  to 38th out of 50 in terms of the percentage of doses administered as a percentage of doses delivered to the states and at 11.0% of its population fully vaccinated is still at 44th in terms of percentage of residents vaccinated. A long way to go to get herd immunity and lagging behind in terms of getting vaccines received into arms and percentage of population vaccinated compared to other states and a great reason to recall this inept governor.

Non CV Case News: Hypocrisy is alive and well with John Kerry, our Climate Czar, was photographed maskless reading a book  but not sucking down a cocktail  on a an American Airlines flight in clear violation of CDC mask wearing rules on planes (at least the carbon warrior  hypocrite was not on his family’s private jet); while Biden refuses to go to the Southern Border and refuses to listen to the warnings of the CBP that the surge in illegals and unaccompanied minors is a crisis, some officials are revealing to Fox that it is and the statistics of record illegal and unaccompanied minors bear them out; the NYT inanely allowed one of its “contributors” Damon Young of The Root to less than 24 hours after the shooter’s arrest play the racist card in describing the shootings by a “sex addicted” gunman who happened to be white; any advertiser with a brain in their head should be pulling ads from the Cack News Network as the purveyor of “fake news” and advocacy “journalism” has seen its ratings fall 47% among prime time viewers  aged 27-54 (wonder if hacks like Lemon, Tapper, Cuomo, Stelter and Ruhle in search of new employment can find journalism objectivity classes they either missed or slept through in college); Vanita Gupta, Biden’s nominee for Associate AG, has a father who owns businesses in Mexico that pay a minimum wage of $1.50 an hour as she advocates a federal minimum wage of $15 an hour; while Blues were quick to rally around inept Newsom after it became almost a certainty that enough signatures would be submitted to permit a recall, the MSM has been slower to get involved until now when Carter Evans of the Consistently Biased System asked a Newsom spokesman whether the Gavin Recall Movement has been hijacked by Reds (some statistics suggest 38% of the petition signers are Blues and Indies); backers of a recall effort for L.A. DA Gascon have formally started the process and have started the 160 day clock to obtain 580,000 signatures of registered voters to place a recall on the ballot https://recallgeorgegascon.com/; as Biden blames Trump for the exploding border crisis leave it to a political cartoonist to reveal the inanity and hypocrisy of Biden’s assertions: https://www.foxnews.com/politics/cartoons-slideshow.
Chicago Gun Violence: HeyJackass.com is back to show that through March 16, 2021,  gun violence involving mostly persons of color shooting persons of color in Chicago is alive and well with 596 persons shot of whom 108 have died.

As always, I hope you enjoy today’s holidays and observances, factoids of interest for this day in history, a musical link to “Chattanoogie Shoe Shine Boy “ by Red Foley,  the fact that you can enjoy Rabelaisian humor; and a quote from Charles River Associates on the Bay of Pigs Invasion, secure in the knowledge that if you want to send a gift for any memorable events like Mother’s Day, college graduations, birthdays, weddings, or anniversaries, you know that the Alaskanpoet can provide you with a unique customized poem at a great price tailored to the event and the recipient. Please contact me for the details on the pricing.

1. St. Patrick’s Day—commemorating the death of the Patron Saint of Ireland St. Patrick and the contributions of the Irish to our society, culture and history with some return of the celebrations that were victims of the CV lock downs last year and another year of delayed large St. Patrick’s Day Parades, including the one in New York City that was first held on this day in 1762.

2. Take Down Tobacco National Day of Action—founded by Tobacco Free for Kids in 1996 and celebrated on the 3rd Wednesday in March to promote the end of smoking in teens which had been declining but is back on the rise again with the advent of e-cigarettes.

3. 1950 Number One Song—the number 1 song in 1950 on this day with a run of 4 weeks in that position was “Chattanoogie Shoe Shine Boy” by Red Foley to share number 1 status with 11 other songs that year.  Here is a recording of “Chattanoogie Shoe Shine Boy” by Red Foley: https://www.youtube.com/watch?v=u6QaW0a7DeM  Red was a country music singer and songwriter and one of the icons of developing country music after WWII and achieved fame as the first singer to achieve a million record sale gospel record. He died in his sleep at age 58 on September 19, 1968 of respiratory failure after an Opry concert.

4. Word of the Day—today’s word of the day as we end the “q’s” to start the “r’s” tomorrow is “Rabelaisian”  which means coarsely hilarious and probably describes humor that would run afoul of the PC warriors.

5. To Dance the Life Away—celebrating the birth on this day in 1938 of the man who was considered to be the “most talented male dance ever” Rudolf Nureyev who is also noted as the first star ballet performer to defect from the Soviet Union. Openly gay and infected by HIV since 1984 he continued to perform as his prowess was not diminished until the early 90’s to finally die from AIDS on January 6, 1993 at the age of 54.

a. 1891 a ship truly misnamed for its passengers and crew, the SS Utopia collided with a moored British battleship in the Bay of Gibraltar, the HMS Anson and sank within 20 minutes, killing 562 of the 880 passengers and crew aboard her.

b. 1960 President Eisenhower signed the National Security Council directive that would ultimately lead to the ill-fated Bay of Pigs Invasion after President Kennedy took office.

c. 1968 as a result of U.S. Army testing of nerve gas at Skull Valley, Utah, 6,000 sheep were found dead and the event was memorialized in a movie starring and directed by George C. Scott, Rage. 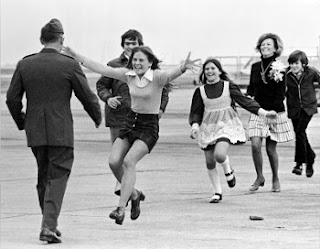 e. 1985 Richard Ramirez “The Night Stalker” committed the first of 2 of his crime spree 14 murders that terrified Los Angeles and the Bay Area until he was caught on August 31, 1985. He was tried, convicted and sentenced to death but managed to appeal his way to stays of execution until he died of B-Stage Lymphoma complications on June 7, 2013 sparing the state the cost of years of appeals as he avoided a date with the needle.

Reflections on the failing to provide air support and the failure of the Bay of Pigs Invasion: ““The former president is said to have asked Kennedy why air cover had been withdrawn, and Kennedy responded by expressing fear that the Soviets would “make trouble”[45] in Berlin. Eisenhower countered, “That is exactly the opposite of what would really happen.”[46] Eisenhower also prophetically told the president that "the failure of the Bay of Pigs will embolden the Soviets to do something that they would otherwise not do." Sure enough, the Soviets quickly formed the opinion that Kennedy was "too young, intellectual, not prepared well for decision making in crisis situations ... too intelligent and too weak." Kennedy's ability to conduct American foreign policy was understandably in question, and it would be eagerly put to the test by Khrushchev. Moreover, Fidel Castro remained”
― Charles River Editors, The Bay of Pigs Invasion:President Kennedy’s Failed Attempt to Overthrow Fidel Castro.

Posted by Michael P. Ridley aka the Alaskanpoet at 11:57 PM