Ridley’s Believe It Or Not For April 3, 2020 the CV continues unabated with 1,084,403 cases worldwide, 227,7453 who have recovered although the jury still on how long before they can still transmit CV and 58.155 deaths while in the U.S. which now ranks 1st in total number of cases, the number of cases has risen to 265,750, 11,983 recoveries and 6,803 deaths (chilling numbers but what is worse for the U.S. are models coming out that show deaths in the 100,000-200,000 range and hospitals being totally swamped by a surge in cases, loss of medical personnel due to their being infected and a bottleneck in terms of testing and assembling results of such testing); in a chilling find aggravated by the fact that far too many Americans are not being tested, new data suggests that half of those with the coronavirus are asymptomatic which is a reason why masks are being urged to be worn by anyone in a CV hotspot in addition to social distancing;  at a time when more so than ever unity to face the CV plague, what we get is from Pelosi is the same old politics as usual launching an “Oversight Committee” aka  partisan witch-hunt against the Trump Administration (will history disclose that any shortcomings in response to the CV plague were due to the Administration hobbled by the impeachment witch-hunt?); the economy lost over 700,000 jobs in March and the markets tanked again as we continue to wait for a flattening of the CV curve; the captain of the USS Theodore Roosevelt whose reports of the coronavirus on board his ship that were leaked to the news media has been relieved of command for going outside the chain of command and creating panic on his ship (as he left the ship he received tumultuous cheers and applause); as humans disappear from our parks, sidewalks and streets due to stay-at-home orders, animals across the world are being seen regaining their turf as this photo in Harold Hill, Romford, East London demonstrates: 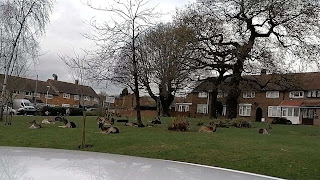 Posted by Michael P. Ridley aka the Alaskanpoet at 5:33 PM