Ridley’s Believe It Or Not For April 27, 2020 The CV pandemic across the planet continues with 55,158 new cases (22.2% decrease in new cases) to bring the total to 3,048,420 cases, 1,920,896 of which  are active, 1,127,524 of which have been closed with 916,985 recoveries ( 81.33% % a .42% improvement over yesterday’s 80.91%) and 210,539 deaths (18.67% , a 41% improvement); in the U.S. which has the dubious distinction of leading the world and has just cracked the 1,000,000 case mark with new cases of 13,728 have brought total cases to 1,000,888 (a 1.4% increase compared to yesterday’s 2.61% increase)  with 807,100 active cases and 193,788 closures, 56,323 of which have been deaths (29.1% compared to  yesterday’s 31.8%) and 137.465 of which  have been recoveries (70.9% compared to yesterday’s 68.2% ),  while total testing has increased to 5,639,543,  an increase of 182,934 (governors starting to open their states must be on pins and needles that a spike in new cases not attributed to increased testing is manifested); unlike Ms. Ford’s allegations against Kavanaugh who had no corroboration of the alleged assault, two more people who knew Tara Reade have come forward to substantiate her sexual assault claim against Creepy Joe Biden who picked up an endorsement from Nancy Pelosi who seems to have joined the ignore Biden’s sexual proclivities crowd; Joy Behar on The View in full rant attack Dr. Birx for defending Trump whom she claims is senile; China is flexing its propaganda muscles on the CV front as fear of not being able to get medical supplies in the CV Pandemic fight may be muting EU criticism of it; Airbnb responding to CV fears has announced enhanced cleaning protocols of properties and a 24 hour window between rentals; in a sign of the CV times, Air Asia has unveiled new uniforms for its flight attendants to aid in the fight against COVID-19 coronavirus: 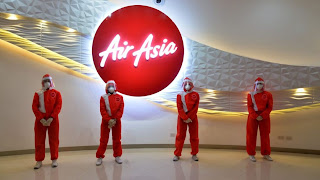 Cuomo may be the darling of social media for his briefings on the CV front, but the New York Nurses Association has sued his Department of Health over the lack of PPE to protect its members; in Chicago, as of April 26, 2020, 746 shootings of whom 141 have died (so much for the effectiveness of Chicago’s stay at home order); Baltimore with a fraction of Chicago’s population and hoping against all hopes that 2020 will not be a record in terms of deaths is now 54 behind Chicago with 87 murders (when will Chicago and Baltimore get serious about this carnage or is this the case of true racism as a Blue run city turns a deaf ear and a blind eye to the slaughter of people of color by people of color and when will the left focus on the problem of color on color shootings in Blue run cities which have been more deadly and more numerous than random mass shootings?).
As always, I hope you enjoy today’s holidays and observances, factoids of interest for this day in history, a musical link to Montell Jordan, the fact that you are open to orisons in dealing with the COVID-19 Pandemic, and a quote by Tom Hodgkinson on computers and mouses, secure in the knowledge that if you want to find a gift for any memorable events like Father’s Day, college graduations, birthdays, weddings, or anniversaries, you know that the Alaskanpoet can provide you with a unique customized poem at a great price tailored to the event and the recipient. You need only contact me for details.
1. Marine Mammal Rescue Day—created by California State Senator Toni Atkins on this day in 2017 to honor the large number of marine biologists, veterinarians and animal care specialists who rescue thousands of hurt, starving or diseased marine mammals that wash up on our shores.
2. World Design Day—created by Pat Paulsen in 1995 to celebrate the contributions to our society and well being by designs.
3. 1995 Number One Song— the number 1 song in 1995 on this day on a run of 7 weeks in the position was “This Is How We Do It” by Montell Jordan. Here is a recording of the song: https://www.youtube.com/watch?v=PVi8bJFIac8 This African-American R&B singer took a 5 year hiatus from music from-2010 to 2015 to practice his faith as a Born Again Christian Minister.
4. Word of the Day—today’s word of the day is “orison” which means prayer which may be a good idea as we start to open up the economy with concerns that the COVID-19 virus will come roaring back as result.
5. Sportsmanship Transcends National Borders—celebrating the birth on this day in 1913 of Carl Ludwig “Lutz” Long, a German long jumper who won a Silver Medal behind Jesse Owens in the 1936 Olympics while Hitler was having a snit fit over the losses suffered by Super Aryan athletes but he is best remembered for advising Owens to avoid fouling out in the qualifications to takeoff a couple inches behind the board which he did and won a Gold Medal. Unfortunately, Long was killed on July 14, 1943 of Sicily.
On this day in:
a. 1974 in another move toward his removal from office, 10,000 people marched in Washington, D.C. demanding his impeachment.
b. 1981 Xerox PARC introduced the computer mouse.
c. 1987 the U.S. Department of Justice barred the entry in to the U.S. of Austrian President Karl Waldheim and his wife on the grounds both were Nazis and he had been involved in deporting thousands of Jews for execution as a German Wehrmacht officer.
d. 2006 Construction began on the Freedom Tower, later renamed One World Trade Center.
e. 2018 the Panmunjom Declaration is signed by North Korea and South Korea, indicating their desire to end the Korean Conflict.
Reflections on the computer mouse:  “To me there is no more depressing sight than a five-year-old staring at a screen, unsmiling, mouse in hand. Besides whatever dreadful things this prolonged exposure to screens is doing to their brains, computer games tend to be solitary affairs, and produce little laughter.” -  Tom Hodgkinson, noted British author and proponent of the relaxed life
Please enjoy the poems on events of interest on my twitter account below (if you like them, retweet and follow me) and follow my blogs. Always good, incisive and entertaining poems on my blogs—click on the links below. Go to www.alaskanpoet.blogspot.com for Ridley’s Believe It Or Not—This Day in History, poems to inspire, touch, emote, elate and enjoy and poems on breaking news items of importance or go to  Ridley's Believe It Or Not for just This Day in History.
© April 27, 2020 Michael P. Ridley aka the Alaskanpoet
Alaskanpoet for Hire, Poems to Admire
Poet Extraordinaire Beyond Compare
The Perfect Gift,
All Recipients to Receive a Lasting Lift

Posted by Michael P. Ridley aka the Alaskanpoet at 9:57 PM