July 18, 2019 Ridley's Believe It Or Not International Nelson Mandela DayEuskw

Ridley’s Believe It Or Not For July 18, 2019 Tensions continue to mount in the Persian Gulf a U.S. warship shooting down an Iranian drone with hostile moves; giving credence to those who believe that Omar has bitten the hand that fed her enough and should go back, Omar has introduced a boycott Israel resolution  and compared Israel to Nazi Germany and the Soviet Union (for an iambic reply on Twitter https://twitter.com/Alaskanpoet/with_replies ); Harris who is in the lead in California is being slammed by Sanders for her typical leftist ploy of deceiving taxpayers, especially the middle class on the Medicare for all (Sanders campaigns on the question of not what the cost will be to taxpayers but what will be cost if we do not adopt Medicare for all?); California which is a Blue run state with leaders like Newsome and Harris who wring their hands constantly over the plight of illegal aliens and ignore the real plight of our homeless was the target of a scathing attack on the inaction on the issue of homelessness by Dr. Drew raising the question with rising levels of lack of sanitation and rats carrying a plethora of deadly diseases of how many people have to die before officials act? (are you listening Garcetti?); at the opening round at the British Open, David Duval who won the tournament in 2001 proved he is not a triskaidaphobiac scoring a 13 on one hole and ending the day with a 90 to face almost insurmountable odds to make the cut; AOC who is too busy creating sound bites on treatment or in her distorted view mistreatment of illegal aliens that she is out of touch with the feelings and needs of voters in her district is claiming that people would not be concerned over losing their private insurance to Medicare for all; alleged noted child pervert Epstein has been denied bail due to concerns of being a flight risk; in Chicago through July 17, 2019, 1430 people have been shot mostly of color by mostly people of color, 252 of whom have died, a fraction of those dead from murders in Cape Town, South Africa (when will Chicago get serious about this carnage or is this the case of true racism as a Blue run city turns a deaf ear and a blind eye to the slaughter of people of color by people of color?)
As always, I hope you enjoy today’s holidays and observances, a music link to Captain and Tennille, factoids of interest for this day in history, the fact you are free from phonus-balonus  and  a relevant quote from Nelson Mandela on achieving freedom, secure in the knowledge that if you want to find a gift for any memorable events like Father’s Day, college graduations, birthdays, weddings, or anniversaries, you know that the Alaskanpoet can provide you with a unique customized poem at a great price tailored to the event and the recipient. You need only contact me for details.
1. International Nelson Mandela Day—created by the UN on July 18, 2009 and celebrated since 2010 on this day to celebrate on the anniversary of his birthday his accomplishments toward social justice and ending apartheid.
2. World Listening Day—created on this day in 2010 by the World Listening Project to celebrate the idea that all talk and no listen is not a rewarding place to be in and humans are better off when they study acoustic ecology which is the relationship between humans and the natural world in reference to sounds.
3. 1975 Number One Song— the number one song in 1975 on a run of 4 weeks in that position was “Love Will Keep Us Together” by Captain and Tennile.  Here is a recording of the song: https://www.youtube.com/watch?v=_QNEf9oGw8o  which was their first hit record. The husband and wife duo remained married for 39 years until Tennille filed for divorce in 2014. Tennille is still with us but the Captain died on January 2, 2019 with Tennille at his side.
4. Word of the Day—today’s word of the day is “phonus-balonus” which means exaggerated trickery or nonsense which has a tendency to exist in the halls of Congress.
5. For Whom the Bell Tolls—celebrating the birthday on this day in 1980 of noted actress Kirsten Bell who has appeared in numerous films, is a lifelong vegetarian and is married to a recovering alcoholic with over 14 years of sobriety. The bell definitely tolls for her fans who are enamored with her performances.
On this day in:
a. 1968 Intel was founded in Mountain View, CA.
b. 1969 after leaving a fundraiser in Chappaquiddick, MA, Ted Kennedy crashed his car on a bridge and onto the tidal basin with Mary Jo Kapachne, a female volunteer left in the car to drown while he supposedly went for help.
c. 1984 at a MacDonald’s in San Ysidro, CA, Oliver Huberty opened fire, killing 21 people and wounding 19 others before being shot and killed by police.
d. 1992 a picture of the band Les Horribles Cernettes, a band was taken and posted as the first photo posted on the World Wide Web: 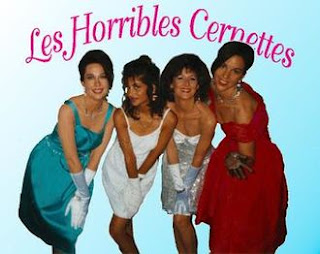 e. 2013 the City of Detroit with 30 billion in debt filed for the bankruptcy in the largest municipal bankruptcy filing in U.S. history.
Reflections on achieving freedom: “There is no easy walk to freedom anywhere, and many of us will have to pass through the valley of the shadow of death again and again before we reach the mountaintop of our desires.” Nelson Mandela. How right he was and how brave to endure the many years of prison fighting for the end of apartheid in South Africa
Please enjoy the poems on events of interest on my twitter account below (if you like them, retweet and follow me) and follow my blogs. Always good, incisive and entertaining poems on my blogs—click on the links below. Go to www.alaskanpoet.blogspot.com for Ridley’s Believe It Or Not—This Day in History, poems to inspire, touch, emote, elate and enjoy and poems on breaking news items of importance or go to  Ridley's Believe It Or Not for just This Day in History.
© July 18, 2019 Michael P. Ridley aka the Alaskanpoet
Alaskanpoet for Hire, Poems to Admire
Poet Extraordinaire Beyond Compare
The Perfect Gift, All Recipients to Receive Lasting Lift

Posted by Michael P. Ridley aka the Alaskanpoet at 1:29 PM