March 18, 2020 Ridley's Believe It Or Not Take Down Tobacco Day Of Action

Ridley’s Believe It Or Not For March 18, 2020 President Trump is now rightfully calling himself a wartime president, invoking the War Protection Act to increase the production of supplies needed to hinder the transmission of the virus, seeking billions in funding to workers and companies being devastated by shutdowns and social distance requirements, continuing to call a spade a spade and designate the coronavirus as the “Chinese Flu” because that is where in Wuhan it originated, as infections, deaths and numbers of tests continue to rise (as more and more tests occur look for the number of cases to rise, especially among asymptomatic persons); the Census Bureau has joined the increasing number of establishments suspending or curtailing operations to halt the spread of the coronavirus and will be suspending operations until April (our judicial system is being impacted as the Superior Court in Orange County is being shut down through March 27); in what must be the height of irresponsibility as states and cities in increasing numbers are closing bars and restaurants and banning gatherings of more than 10 people, college students during spring break are flocking the beaches in Florida in huge parties being exposed to anyone who already has the virus and does not know it); Red Representative from Florida Mario Diaz-Balart and Blue Representative from Utah in a reaffirmation of the fact that the COVID-19 virus knows no political boundaries have become the first representatives in Congress to test positive; pictures from space show that sections of cities on Earth are becoming ghost sections: 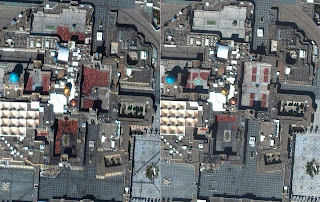 in another example that anything coming out of North Korea cannot be trusted after it has been reporting no cases of the COVID-19 virus, Rocket Man announced the building of a new infirmary to treat cases; Ford, GM and Fiat Chrysler have announced the shutdown of all production of autos in the U.S. and North America to help halt the spread of the CO-VID19 virus; Italy’s death toll has spiked at 475 in one day to at least 2978 total deaths and nearing the total deaths in China; in Chicago, as of March 17. 2020, 446 people have been shot of whom 83 have died; Baltimore with a fraction of Chicago’s population and hoping against all hopes that 2020 will not be a record in terms of deaths has fallen 21 behind Chicago with 62 murders by shootings (when will Chicago and Baltimore get serious about this carnage or is this the case of true racism as a Blue run city turns a deaf ear and a blind eye to the slaughter of people of color by people of color and when will the left focus on the problem of color on color shootings in Blue run cities which have been more deadly and more numerous than random mass shootings?).
As always, I hope you enjoy today’s holidays and observances, factoids of interest for this day in history, a musical link to the Beatles,  the fact that you are not olid, a relevant quote by Thomas Hutchison on the Stamp Act,  secure in the knowledge that if you want to find a gift for any memorable events like Father’s Day, college graduations, birthdays, weddings, or anniversaries, you know that the Alaskanpoet can provide you with a unique customized poem at a great price tailored to the event and the recipient. You need only contact me for details.
1. Take Down Tobacco Day of Action—created in 1996 as Kick Butts Day through 2019 until changed to present name to promote awareness of the need to end the use of tobacco as use among teens has started to rise again due to e-cigarettes which are not health-hazard free.
2. National Biodiesel Day—celebrating the use of diesel fuel produced from renewable plants and celebrated on the birthday of the inventor of the diesel engine Rudolph Diesel whose engine was originally designed to run on peanut oil.
3. 1964 Number 1 Number One Song— the number one song in 1964 on this day on a run of 7 weeks in the position was “I Want to Hold Your Hand” the first of a string of three songs that sequentially occupied the number one slot for 14 weeks by the Beatles.  Here is a recording of the song performed live on The Ed Sullivan Show  on February 9, 1964 https://www.youtube.com/watch?v=jenWdylTtzs (listen to the screaming fans in the audience).
4. Word of the Day—today’s word of the day is “olid” which means rank smelling which is a trait most people do not want to have and avoid with clean clothes and clean bodies.
5. Time to Hang It Up—celebrating or bemoaning as the case may be if one was on her client list the birth of Deborah Jeanne Palfrey on this day in 1956 who was better known as the “D.C. Madam” and after being convicted of money laundering, racketeering and using the mail for illegal purposes on April 15, 2008 and facing a prison sentence of 5 or 6 years hung herself on May 1, 2008.
On this day in:
a. 1766 in a too little too late moment to quell the rising tide of anger in the 13 Colonies, Parliament abolished the Stamp Act.
b. 1938 Pemex was created by Mexico nationalizing all foreign owned petroleum producers.
c. 1959 the Hawaii Admission Act granting statehood to Hawaii as the 50th state was signed into law.
d. 1968 the Congress repealed the requirement that U.S. currency be backed by gold.
e. 1990 two thieves disguised as police officers stole 13 works of art valued at over $500 million from the Isabel Stewart Gardner Museum in Boston and have yet to be recovered.
Prophetic reflections on the Stamp Act: “It cannot be good to tax the Americans… You will lose more than you gain.”Thomas Hutchinson, 1765 As the Governor of the Massachusetts Colony he was right as right could be but unlistened to by Parliament.
Please enjoy the poems on events of interest on my twitter account below (if you like them, retweet and follow me) and follow my blogs. Always good, incisive and entertaining poems on my blogs—click on the links below. Go to www.alaskanpoet.blogspot.com for Ridley’s Believe It Or Not—This Day in History, poems to inspire, touch, emote, elate and enjoy and poems on breaking news items of importance or go to  Ridley's Believe It Or Not for just This Day in History.
© March 18, 2020 Michael P. Ridley aka the Alaskanpoet
Alaskanpoet for Hire, Poems to Admire
Poet Extraordinaire Beyond Compare
The Perfect Gift,
All Recipients to Receive a Lasting Lift


Posted by Michael P. Ridley aka the Alaskanpoet at 7:16 PM