Ridley's Believe It Or Not For February 19, 2016 Prevent Plagiarism Day

Ridley’s Believe It Or Not For February 19, 2016. Unfortunately, still 336 days to go in President Obama’s pathetic lame duck term but fortunately only 15 days until the start of and my daily updates on the Iditarod, the Last Great Race on Earth. Interesting theater in Nevada at the two hall meetings last night as Sanders has closed to a statistical dead heat with Hillary. I trust your weekend is off to a great start and as always, I hope  you enjoy today’s holidays and observances, music links to Rod Stewart and Falco, factoids of interest, a relevant quote by Charles Caleb Colton, looking forward to enjoying some chocolate mints, blessed with a positive attitude and  secure in  the knowledge that if you want to find a gift for any memorable events like birthdays, weddings, or  anniversaries, you know that the Alaskanpoet can provide you with a unique customized poem  at a great price  tailored to the event and the recipient. You need only contact me for details.
1. National Prevent Plagiarism Day—promoting awareness of the practice of plagiarism and the assault on one’s creativity  by copying other people’s ideas or works and passing them off as your own; very negative fallout when caught in the act as Joe Biden and Senator Rand Paul found to their dismay.
2. Iwo Jima Day—Commemorating the start of Operation Detachment, the battle of Iwo Jima, which started on this day in 1945 which was deadliest and bloodiest  battle in Marine Corps history and is best known for the iconic photograph of the raising of the flag at the summit of Mt. Suribachi and memorialized by the Marine Corps Memorial just outside of Arlington National Cemetery. 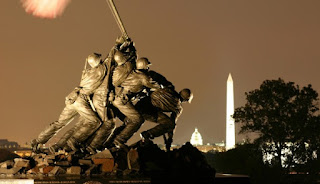 3. 1979 Number One Song—celebrating the number one song in 1979 on a brief run of four weeks in that position Da Ya Think I’m Sexy by Rod Stewart. Here is a link to Rod Stewart performing Da Ya Think I’m Sexy: https://www.youtube.com/watch?v=Hphwfq1wLJs
4. National Chocolate Mint Day—pleasing complement to a hotel turn down service or in the form of ice cream to complement a meal.
5. Move Over Mozart—celebrating the birthday on this day in 1957 of Austria’s greatest musician since Mozart, the 80’s pop singer Falco who died way too early in a traffic accident while on vacation in the Dominican Republic at age 41. Here is a video of one of his hits Der Kommisar: https://www.youtube.com/watch?v=_w4Xulsjo5I.
On this day in:
a. 1847 the first group of rescuers reached the ill-fated Donner Party who were trapped in the Sierra Nevadas and survived by cannibalism.
b. 1859 New York Congressman Daniel E. Sickles was acquitted of murder with a successful defense of temporary insanity, the first time successfully used in the United States.
c. 1878 Thomas Edison patented the gramophone (phonograph).
d. 1906 Will Keith Kellogg and Charles D. Bolin founded the Battle Creek Toasted Corn Flake Company now known as Kellogg’s.
e. 2001 the Oklahoma City Bombing Museum was dedicated at the Oklahama City National Memorial.
Reflections on plagiarism: “If  we steal thoughts from the moderns, it will be cried down as plagiarism; if from the ancients, it will be cried up as erudition.” Charles Caleb Colton, noted 19th Century eccentric English writer, cleric and collector.
Please enjoy the poems on events of interest on my twitter account below (if you like them, retweet and follow me) and follow my blogs. Always good, incisive and entertaining poems on my blogs—click on the links below. Go to www.alaskanpoet.blogspot.com for Ridley’s Believe It Or Not—This Day In History, poems to inspire, touch, emote, elate and enjoy and poems on breaking news items of importance or go to Ridley's Believe It Or Not for just This Day In History.
© February 19, 2016, Michael P. Ridley aka the Alaskanpoet
Alaskanpoet for Hire, Poems to Admire


Poet Extraordinaire Beyond Compare
The Perfect Gift, All Recipients to Receive a Lasting Lift
Posted by Michael P. Ridley aka the Alaskanpoet at 4:13 PM