Ridley’s Believe It Or Not For March 6, 2016. Unfortunately, still 320 days to go in President Obama’s pathetic lame duck term but fortunately thanks to trainloads of snow from the Fairbanks area, the Iditarod, the Last Great Race on Earth, kicked off Saturday from Anchorage for its ceremonial start, albeit abbreviated to only three miles and in a few hours today the real race will mush off from Willow, Alaska. Here is a photo of last year’s winner Dallas Seavey mushing off in Saturday’s ceremonial start. 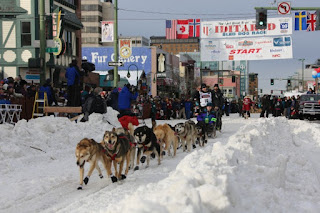 I trust your Sunday is off to a great start and as always, I hope  you enjoy today’s holidays and observances, a music link to Madonna, factoids of interest, a relevant quote by Benjamin Oliver looking forward to enjoying a some Oreos, blessed with a positive attitude and  secure in  the knowledge that if you want to find a gift for any memorable events like birthdays, weddings, or  anniversaries, you know that the Alaskanpoet can provide you with a unique customized poem  at a great price  tailored to the event and the recipient. You need only contact me for details.
1. Root, Root Root Canal Day—honoring the accomplishments of dentists who are the last line of defense against the relentless assault on our teeth due to our proclivity to ignore good dental hygiene.
2. Day of the Dude—commemorated since the founding of dudeism by Oliver Benjamin in 2005 to promote the philosophy of “take it easy,” “go with the flow” and Taoism on a diet stripped of the medicinal and metaphysical.
3. 1995 Number One Song—celebrating the number one song in 1995 on a run of seven  weeks in that position Take a Bow by Madonna. Here is a link to Madonna performing Take a Bow: https://www.youtube.com/watch?v=XDeiovnCv1o
4. National Oreo Day—celebrating addictive snack food.
5. Who’s On First—celebrating the birthday on this day in 1906 of an iconic comedian and pudgy duo of the Abbot and Costello team, Lou Costello who died way too early at the age of 52 of a heart attack.
On this day in:
a. 1836 after a siege of 13 days, the Alamo was captured by 3,000 Mexican troops resulting in the death of all of its 136 defenders, including Davy Crockett.
b. 1857 in one of SCOTUS’ objectionable decisions which helped to accelerate the path of the U.S. toward the Civil War, the court ruled in Dredd Scott v. Sandford that African-Americans whether free or slaves were not American citizens and had no standing to sue in federal court and the banning of slavery in territories pursuant to the Missouri Compromise was unconstitutional.
c. 1943 Norman Rockwell’s published the iconic Freedom from Want in the Saturday Evening Post as part of the Four Freedoms Series. 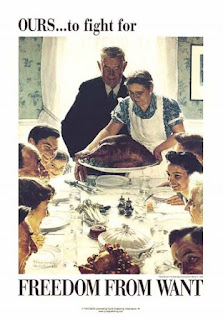 d. 19 67 in a visible rejection to the failure of communism to advance the needs and dreams of its people, Svetlana Alliluyeva, the daughter of Joseph Stalin, defected to the United States.
e. 1981 after 19 years Walter Cronkite, the anchor for CBS Evening News, signed off for the last time.
Reflections on the Dude and Dudeism: “The Dude is an extreme case, but he provides an ideal which can help you to bring a little more "Dude" into your life, without giving up on the rat race entirely. … I grew up in the 1980s, which was a very ambitious and materialistic time — the era of the Yuppies. Even as a youth, I found it frightening and false. … The reason I embarked on a 10-year backpacking journey was so I could avoid being brainwashed by the machine of industry, and find the space and freedom to indulge my imagination.” Oliver Benjamin
Please enjoy the poems on events of interest on my twitter account below (if you like them, retweet and follow me) and follow my blogs. Always good, incisive and entertaining poems on my blogs—click on the links below. Go to www.alaskanpoet.blogspot.com for Ridley’s Believe It Or Not—This Day In History, poems to inspire, touch, emote, elate and enjoy and poems on breaking news items of importance or go to Ridley's Believe It Or Not for just This Day In History.