March 14 late evening Mushing report for the Iditarod from the Alaskanpoet
No change in the top five as all are in the same order with Dallas Seavey, Mitch Seavey and Brent Sass out of White  Mountain, 898 miles from the start of the race and Aily Zirkle and Wade Marrs still have not left White Mountain and its balmy sixteen  degrees above zero weather. The second fastest woman on the trail Michelle Phillips still leads Jeff King
and  the rookie from Norway has moved up to 27th place. The Berington female twins racing as if they are tied together occupy 40th and 41st place; DeeDee Donrowe is in Unalakleet chasing the Berinton twins who hav already left and Ellen Halverson continues to tighten her grip on the Red Lantern in last place.


Good chance this race will be won at the late evening or early morning hours of the Ides of March when voters in the lower 48 are concentrating on the primaries when they should be concentrating on the struggle of the human spirit over adversity—talk to Ellen Halverson and pray that she overcomes the depression of being alone except for her dogs mushing less than 500 hundred miles and subtracting from Nome---it is The Last Great Race On Earth because it attracts the last great competitors on earth:Here is a great photo of Dalls Seavey and his dogs on straw on White Mountain: 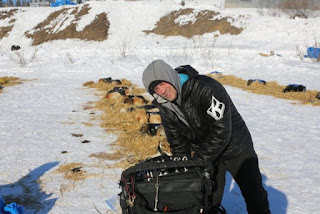 Sled dogs to those who race are more like a son or daughter than a pet which tells one the emotional courage of Jeff King to continue racing after his dog Nash was killed outside of Nulato by a drunken DUI snowmachine driver. Good chance one of the top five will be pulling into Nome in the next 24 hours.

Posted by Michael P. Ridley aka the Alaskanpoet at 12:14 AM