The top five mushers remain the same but their order has changed as all five are out of Unalakleet, 714 miles from the start of the race. Mitch Seavey, Dallas Seavey, Brent Sass, Aily Zirkle and Wade Marrs in that order with the lead of Mitch Seavey over Aily Zirkle of only 82 minutes which in Inditarod terms since mushers rarely see another musher on the trail, is almost like a photo finish. Jeff King whose dog Nash was killed on the trail outside of Nulato by a drunk snowmachine driver is in 16th place out of the Kaltag checkpoint 629 miles from the start of the race. Kristy and Anna Berrington are still at 44th and 45th and are still in Nulato, 582 miles from the race start and DeeDee Jonrowe still in 47th but out of Galena, 545 miles from the start of the race. Ellen Helverson is still in last place still in Cripple, 309 miles the leader  and another musher has dropped out bringing the total to eight. This photo says it in terms of why there are checkpoints along the race (does that musher’s face look tired and windblown or what): 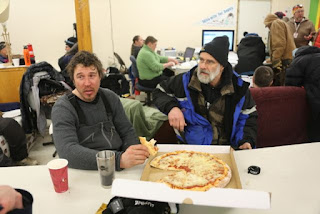 Nash who was killed by a drunk snowmachine driver has been mentioned on most of the news broadcast and like Balto 1925 is on his way to being famous in death. Alread signs along the trail commemorating his unfortunate death which hopefully gives some comfort to Jeff King. 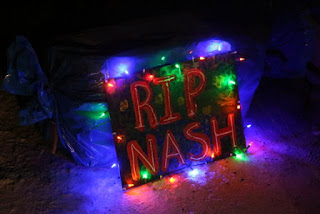 Posted by Michael P. Ridley aka the Alaskanpoet at 11:39 AM