March 10, 2016 Mush Report on the Iditarod by the Alaskanpoet
As of a few minutes past midnight the top five mushers are all in the Cripple checkpoint, 425 miles from the start. Dallas Seavey is in first place, followed by Noah Burmeister, Robert Sorlie, John Baker and Kelly Maixner. Monica Zappa is the fastest woman on the course in 18th  place at the Ophir checkpoint and Aily Zirkle, three time runner-up is in 22nd place at the Takotna checkpoint joined by the Berington identical twins at 40th and 41st  and DeeDee Jonrowe at 44th. Eileen Henderson is in last place as the 81st musher on the course having left the Rohn checkpoint.


Photo below is Noah Burmeister pulling into the Cripple checkpoint. 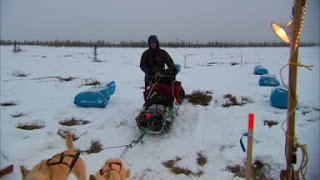 Posted by Michael P. Ridley aka the Alaskanpoet at 12:06 AM