March 14 Morning Mushing Report for the Iditarod from the Alaskanpoet
This morning is another report that proves the adage some things never change, only the order is rearranged. After nine days of agony, cold and the death of one dog and the injury to three others from a dui snowmachine driver, the top five mushers have not changed but the order is different from the last report. Dallas Seavey, Brent Sass and Mitch Seavey in that order lead having left the Elim checkpoint, 852 miles from the start of the race, Aily Zirkle is in fourth still in Elim and Wade Marrs has left Koyuk 804 miles from the start. Jeff King formerly in the top five but likely still grieving over the loss of Nash is in Noyuk in 11th place and the second fastest female in the race is Michelle Phillips is in Koyuk in 13th place; the twins Anna and Kristy Berrington (blood is thicker than competing in the Iditarod) are one minute apart as they have been from the start are in 43rd and 44th place and are out of Kaltag 629 miles from the start; DeeDee Jenrowe is in 48th place in Kaltag and Ellen Halverson further secured her lock on the Red Lantern, the trophy awarded to the musher who finishes in last place is in Ruby only 495 miles from the start and who faces the second half of the race mushing all by her very lonesome self but an obvious testimonial to the human spirit’s desire to finish what one starts. The number of mushers that have dropped out has risen to nine over ten percent of the number that started the race.
It may not be a Nativity scene as there is no roof; but check out the accommodations for one of the dogs of Aily Zirkle resting like a coiled spring ready to start mushing on Zirkle's command. 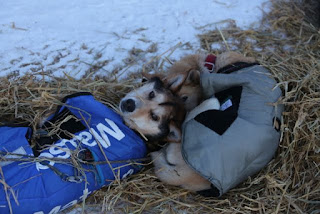 It may not be a Nativity scene as there is no roof; but check out the accommodations for one of the dogs of Aily Zirkle snoring away in Elim:
Posted by Michael P. Ridley aka the Alaskanpoet at 11:17 AM