Afternoon Mushing Report for the Iditarod

March 18 Afternoon Mushing Report for the Iditarod
62 mushers have made it into Nome and there are still 9 racers on the course with the musher in last place still 171 cold miles away from  Nome which is in a heat wave of 2 degrees above zero. 55 year old Mary Helverson, down to 9 dogs, was scratched from the course by race officials under their Rule 36 lack of competivness and thereby avoids the dubious distinction of becoming the only three time Red Lantern winner. The most notable musher scratched by race officials has to be 81 year old Norman Vaugh who was scratched in 1987 but continued on the course unofficially to finish 6 days later after the Red Lantern winner and 20 days after the winner Susan Butcher—as has been said before Alaskans are a tough lot. Here are the standings for the nine mushers still on the course:

14 mushers have either withdrawn or been scratched. Here is a photo of two female mushers in
racing down Front Street in Nome at two in the morning today, rookie Kristin Pace who out mushed  by nine seconds second time musher Ryne Olson for 57th place-not only are Alaskans tough, they are also competitive. 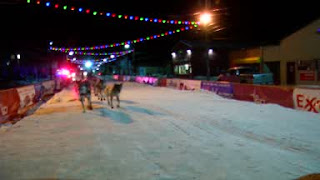 Posted by Michael P. Ridley aka the Alaskanpoet at 2:14 PM