November 10, 2022 Ridley's Believe It Or Not World Kidney Day

CV World Cases: The planet continues with cases still increasing but the increase slowing down with cases now over 453 million at 453,639,251 cases,  59,995,123 of which are active, 393,644,028 closed with 387,593,049 recoveries (98.46%), and crossing the 6,000,000 barrier 6,051,079 deaths (1.54% )to continue the low trend of increased cases with increased recovery percentages and decreased death percentages with some plateaus, dips, and rises.
CV USA Cases: Total cases now passing 81 million at 81,108,786 with 24,517,351 active cases  of which 4888 are serious or critical, (15,517 on 12/12) (back to steady decreases despite the increase in active cases due to the relative mildness of the Omicron variant) to .020 % of active cases (back to back steady decreases despite the increase in active cases due to the relative mildness of the Omicron variant  and to increase  the reduction from the 29,271 peak on 12/31/2020 to 24,383, 56,591,975 closures with 991,260 deaths (1.75%) and with 55,600,175 recoveries (98.25%). Our death rate percentage is .21%  higher than the world’s death rate.
Standing: On a deaths per million population measure on a steady but slowing climb to 2965 the U.S. ranks behind Peru (6262) the new number 1 which has had a quantum leap in deaths previously unmatched which was a change in the classification to give Peru the a new method of reporting; Bulgaria (5252), Hungary (4637), Romania (3377),  Brazil (3041), and Poland (2996) and slightly higher than Argentina (2767), Columbia (2688), Belgium (2600), Italy (2595), Russia (2458), Mexico (2443), UK (2375), Chile (2245), Spain (2160), France (2135), Portugal (2098), Ecuador (1952),  Bolivia (1798),  Sweden (1736) that never closed its economy down like we did, and Switzerland (1523).
US Vaccinations: As of 03/10/22   555.6 million doses, 279,001 per day last week ( 75.8%) of population now vaccinated  with at least one shot)  and in California 36,485 per day  (which means at least 81.9% of the population of California has received at least one shot) which many believe is necessary to develop herd immunity (other than Flip Flop Fauci who may believe that 90% is required).  In California 71,889,489 total doses have been given (83.2%  of doses received to exceed the U.S. average of 80.2%), California has moved  from 10th to 12th tied with Illinois of the 50 states in terms of the percentage of doses administered as a percentage of doses delivered to the states and at 70.6%% of its population fully vaccinated compared to the U.S. average of 64.5% and has  moved from 12th   in terms of the percentage of the population fully vaccinated compared to other states (nothing like a recall election to get Newsom’s attention and performance).
Non  CV News: Smollett received his sentence today of 3 years’ probation and 150 days in the county jail which prompted a ranting anti racist outburst as he was led away to start serving his time; Putin and his lackeys are sounding more and more like Baghdad Bob with the latest claim that the U.S. has been funding biologic weapons research in Ukraine probably in a false flag operation to justify Russian use of chemical and biological weapons against Ukraine and its civilians; as more and more American companies are beginning to curtail operations in Russia, Putin is threatening to nationalize any company that curtails its business operations; Republicans are raising the issue that the Sierra Club, League of Women Voters and the National Defense Council are receiving funds from the Sea Change Foundation which may have ties to Russian efforts to curtail U.S. domestic oil production; as Americans who are not in the top ten percent of income earners are really suffering from inflation and soaring gas prices, Energy Secretary Granholm seems tone deaf to the concerns and dismissing them since if they had an EV they wouldn’t be affected (ignores the fact electricity rates are on an upward  rise so it will cost more to charge the EV’s overnight or at charging stations); anyone who watched Harris and the President of Poland conduct a joint press conference should be appalled at the sight of Harris laughing uncontrollably over a question of refugees from Ukraine (she is living proof that the Peter Principle is alive and well as she seems totally out to lunch on any serious issue confronting this nation); Ukrainians are inflicting damages on the Russians but they continue to advance albeit it much slower than Putin had anticipated; in addition to soaring gun and ammo sales, the wave of violent crime has seen a surge of states passing rights to carry laws without the need for a permit as Alabama just joined 21 other states with similar legislation; while Putin is trying to convince the world his invasion of Ukraine is to save the nation from Nazis, which the world is not buying, our domestic left touts its efforts to “save our democracy” which the political cartoonist points out is the exact opposite of their acts on our democracy: 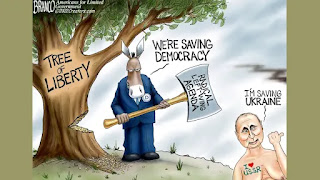 Chicago Gun Violence: Hey Jackass.com is alive and well to collect data to show that through March 9;  2022, gun violence involving mostly persons of color shooting mostly persons of color in Chicago is alive and well with 454 shot of whom 98 have died.
As always, I hope you enjoy today’s holidays and observances, factoids of interest for this day in history, a video recording of “Evergreen” by Barbra Streisand; the memories when you or your spouse had developed spargosis; and a quote by Jimmy Valvano on the secrets of a successful life and how to deal with cancer, secure in the knowledge that if you want to send a gift for any memorable events like St. Patrick’s Day, Mothers’ Day, college graduations, birthdays, weddings, or anniversaries, you know that the Alaskanpoet can provide you with a unique customized poem at a great price tailored to the event and the recipient. Please contact me for details on pricing.
1.  Tibetan Uprising Day—commemorating the armed uprising of Tibetans against the repressive occupation of Tibet by China which resulted in the fleeing of the Dalai Lama into exile.
2.  World Kidney Day—created by the International Society of Nephrology and the International Federation of Kidney Foundations in 2006 and celebrated on the 2nd Thursday in March to promote awareness of healthy life style choices to prevent kidney illness and disease and to raise funds for research of in preventing and curing kidney diseases.
3.  1977  Number 1 Song—the number 1 song in 1977  on this day was  “Evergreen” by Barbra Streisand  on a run in that position for 1 weeks  to join 25 other number 1 songs while 18 acts  hit the charts at Number 1 for the first time. Here is a video recording of Barbra Streisand performing “Evergreen”: https://www.youtube.com/watch?v=udLeOOy6em4 Streisand has a career that spanned 7 decades as a singer, director, songwriter and actress and is one of the few performers to have won an Emmy, Grammy, Oscar and Tony.
4.  Word of the Day—the word of the day is “spargosis” which means the swelling of a woman’s breasts due to pregnancy.
5.  Never Give Up Even to the Big C—celebrating the birth on this day in 1946 of Jimmy Valvano, known as “Jimmy V” successful basketball at Rutgers and winning college basketball topped of at North Carolina State for 10 years but who contracted cancer that spread to his bones to kill him far too early at age 47 on April 28, 1993.
On this day in:
a. 1933 the Long Beach Earthquake with Richter rating of 6.4 and an epicenter of the coast of Long Beach struck causing massive devastation and killing some 108 people and resulting in major revisions of the building codes in California.
b. 1945 B-29’s of the U.S. Army Air Force firebombed Tokyo resulting in massive devastation and the deaths of some 100,000 people, mostly civilians.
c. 1970 U.S. Army Captain Ernest Medina was charged for the Mai Lai Massacre by troops under his command in South Vietnam on March 16, 1968.
d. 2000 the Dot.com bubble peaked with the NASDAQ Composite stock market index closing at 5048.64.
e. 2019 Ethiopian Airlines Flight 302 a Boeing 737 MAX on a flight from Addis Abba to Nairobi, Kenya crashed 6 minutes after taking off, killing all passengers and crew aboard which because it was the second 737 MAX to crash in 5 months resulted in the grounding of the 737 MAX fleet worldwide.
Reflections on coping with and fighting cancer: “To me, there are three things we all should do every day. We should do this every day of our lives. Number one is laugh. You should laugh every day. Number two is think. You should spend some time in thought. And number three is, you should have your emotions moved to tears, could be happiness or joy. But think about it. If you laugh, you think, and you cry, that's a full day. That's a heck of a day. You do that seven days a week, you're going to have something special….  Cancer can take away all of my physical abilities. It cannot touch my mind, it cannot touch my heart, and it cannot touch my soul. And those three things are going to carry on forever. I thank you and God bless you all." Jimmy Valvano at the first Annual ESPY Awards on March 4, 1993 at Madison Square Garden where he accepted the inaugural Arthur Ashe Courage and Humanitarian Award and announced the formation of the V Foundation to fight cancer.
Please enjoy the poems on events of interest on my twitter account below (if you like them, retweet, and follow me) and follow my blogs. Always good, incisive and entertaining poems on my blogs—click on the links below. Go to www.alaskanpoet.blogspot.com for Ridley’s Believe It Or Not—This Day in History,  poems to inspire, touch, emote, elate and enjoy and poems on breaking news items of importance or go to  Ridley's Believe It Or Not for just This Day in History.

© March 10, 2022,  Michael P. Ridley aka The Alaskanpoet
Alaskanpoet for Hire, Poems to Admire
Poet Extraordinaire, Beyond Compare
A Unique Gift, All Recipients Receive a Lasting Lift