CV World Cases: The planet continues on an increasing basis with cases now over 437 million at 437,846,432 cases,  62,249,029 of which are active, 375,554,383 closed with 369,575,737 recoveries (98.41%), and passing the 5,900,000 barrier 5,978,646 deaths (1.59% )to continue the low trend of increased cases with increased recovery percentages and decreased death percentages with some plateaus, dips, and rises.
CV USA Cases: Total cases now passing 80 million at 80,649,244 with 26,172,800 active cases  of which 7779  are serious or critical, (15,517 on 12/12) (back to steady decreases despite the increase in active cases due to the relative mildness of the Omicron variant) to .031 % of active cases (back to back steady decreases despite the increase in active cases due to the relative mildness of the Omicron variant  and to increase  the reduction from the 29,271 peak on 12/31/2020 to 21,492, 54,476,444 closures with 975,301 deaths (1.79%) and with 53,501,143 recoveries (98.21%). Our death rate percentage is .20%  higher than the world’s death rate.
Standing: On a deaths per million population measure on a steady but slowing climb to 2918 the U.S. ranks behind Peru (6245) the new number 1 which has had a quantum leap in deaths previously unmatched which was a change in the classification to give Peru the a new method of reporting; Bulgaria (5185), Hungary (4579), Romania (3342),  Brazil (3020), and Poland (2954) and slightly higher than Argentina (2749), Columbia (2680), Belgium (2585), Italy (2570), Mexico (2425), Russia (2413), UK (2356), Chile (2186), Spain (2125), Portugal (2078), France (2012), Ecuador (1947),  Bolivia (1796),  Sweden (1686) that never closed its economy down like we did, and Switzerland (1511).
US Vaccinations: As of 03/01/22   553.1 million doses, 387,952 per day last week ( 75.6%) of population now vaccinated  with at least one shot)  and in California 61,415 per day  (which means at least 81.7% of the population of California has received at least one shot) which many believe is necessary to develop herd immunity (other than Flip Flop Fauci who may believe that 90% is required).  In California 71,568,918 total doses have been given (83.4%  of doses received to exceed the U.S. average of 80.2%), California has not moved  from 12th  of the 50 states in terms of the percentage of doses administered as a percentage of doses delivered to the states and at 70.4%% of its population fully vaccinated compared to the U.S. average of 64.3% and has moved from 10th to 8th  in terms of the percentage of the population fully vaccinated compared to other states (nothing like a recall election to get Newsom’s attention and performance).
Non  CV News: Biden gave his SOTUS tonight with retreads of his Inauguration Speech about unity and coming together which were immediately discarded, banned Russian planes from our commercial airspace but not Russian oil from being imported into our gas tanks and not one word about increasing domestic oil production, only a pinprick not lasting release from our Strategic Petroleum Reserve (at least stated he felt empathy for the inflation he has caused but did not fess up to and true to form gaffed big time confusing Ukrainians with Iranian); Russia’s invasion of Ukraine has entered its 6th day and there is some speculation the miles long convoy headed to encircle Kviv has been stalled for lack of fuel and munitions (if true they are sitting ducks for drones and cruise missiles if the West can accelerate shipments of such weapons to Ukraine); Russia is still trying to justify its invasion which most of the world and probably an increasing number of Russians as body bags must be arriving back home not justifying it either; Secretary of State is pointing out the obvious—why should a nation like Russia that has invaded a country and is bombing and rocketing civilian targets be permitted to remain on the UN Human Rights Council; as the idiocy of this nation importing oil from Russia and under the guise of fighting climate change trying to shut down or at least hinder our domestic oil industry is totally mindboggling and Psaki may have indicated that such foolishness may be coming to an end with a comment that all sanctions are on the table; Harris never ceases to amaze us with her tone deaf out of touch reality when commenting on Biden’s nomination of the first female black to SCOTUS  that voters got what they asked for (like inflation, supply chain bottlenecks, soaring energy prices, open border with criminals, human trafficking and illegal drugs pouring across and a collapse in Afghanistan and a Russian invasion of Ukraine as she cackled she may have gone off script); the supply chain for European made cars including high end luxury ones just got worse as the Felicity Ace which was carried 4,000 autos, when it was disabled after it caught fire in the Atlantic on February 16, 2022 and was being towed to Portugal, sank in heavy seas off of a chain of Portuguese islands; while Ukrainians are fighting for their lives against the Russian Bear that has invaded their country, our idiotic Climate Change Czar is complaining that the efforts to fight climate change are being sidetracked by the Russian invasion, leave it to the political cartoonist to reveal how out of touch with the Ukrainians suffering our elitist Kerry is: 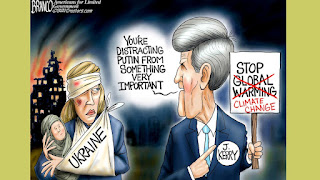 Chicago Gun Violence: Hey Jackass.com is alive and well to collect data to show that through February 28, 2022, gun violence involving mostly persons of color shooting mostly persons of color in Chicago is alive and well with 398 shot of whom 87 have died while 2021 shootings numbers compared to 2020 are 4544 to 4248 and deaths are 846 compared to 797.
As always, I hope you enjoy today’s holidays and observances, factoids of interest for this day in history, a video recording of “One Bad Apple” by the Osmonds; the fact that you do not need to be sophomoric to get your point across; and a quote by J.G. Ballard on Watergate, secure in the knowledge that if you want to send a gift for any memorable events like Valentine’s Day or St. Patrick’s Day, college graduations, birthdays, weddings, or anniversaries, you know that the Alaskanpoet can provide you with a unique customized poem at a great price tailored to the event and the recipient. Please contact me for details on pricing.
1.  Mardi Gras (Fat Tuesday)—celebrating the beginning of 40 days of debauchery and celebration endings on Ash Wednesday with this year being the first Mardi Gras celebrated in two years with the COVID-19 anti-virus restrictions being lifted as opposed to be installed or increased (at least mask wearing mandates were good training for the mask wearing at the various balls and a parties held on this day around the world but especially celebrations to the max in New Orleans and Rio Di Janeiro.
2.  National Planning a Wedding Day—created by the Knot and first celebrated on this day in 2017 to prompt engaged couples to move their engagement forward toward matrimony.
3.  1971  Number 1 Song—the number 1 song in 1971  on this day was  “One Bad Apple” by the Osmonds  on a run in that position for 5 weeks  to join 22 other number 1 songs and 15 other acts hit the charts at Number 1 for the first time, including Janis Joplin, who became the second artist to attain that status posthumously. Here is a video recording of the Osmonds performing “One Bad Apple”: https://www.youtube.com/watch?v=L4CcgblWC8k This Ogden, Utah group of male siblings was a popular rock group from 1970-1980.
4.  Word of the Day—the word of the day is “sophomoric”  which means bombastic which politicians often call upon to liven up another otherwise boring speech.
5.  Surname Into a Verb—celebrating the birth on this day in 1927 of Robert Bork, noted Circuit Court of Appeals Justice, Solicitor General famous for firing the Watergate Special Prosecutor Archibald Cox after the Attorney General and Deputy Attorney General resigned rather than comply with Nixon’s order  during the “Saturday Night Massacre” during Watergate Scandal, Yale Law Professor, and Reagan Nominee to SCOTUS who faced a confirmation roadblock probably due to his actions during Watergate to “Bork” him and deny him the nomination 58-42. He passed on December 19, 2012 at age 85.
On this day in:
a. 1893 electrical engineer Nikola Tesla gave the first public demonstration of radio in St. Louis, Missouri.
b. 1954 5 Puerto Rican Nationalist supporters entered the visitors’ gallery at the Capitol and fired 30 rounds at members of Congress debating an immigration bill, wounding 5 members, 1 seriously. Tried and convicted and sentenced to essential life prison terms, Jimmy Carter commuted their sentences to time served.
c. 1974 a grand jury indicted 7 Nixon Administration aides and officials who would be known as the “Watergate Seven’—H.R. Haldeman, John Ehrlichman, John Mitchell, Charles Colson, Gordon C. Strachan, Robert Mardian and Kenneth Parkinson for their roles in hindering the Watergate investigation and named President as an unindicted co-conspirator.
d. 2005 in a youth has its advantages SCOTUS in the case of Roper v. Simmons ruled 5-4 that executing juveniles convicted for murder was unconstitutional.
e. 2006 Wikipedia produced its one millionth article “Jordanhill railway station.”
Reflections on Watergate: The American Dream has run out of gas. The car has stopped. It no longer supplies the world with its images, its dreams, its fantasies. No more. It's over. It supplies the world with its nightmares now: the Kennedy assassination, Watergate, Vietnam.” J.G. Ballard, noted English author, writer, and essayist
Please enjoy the poems on events of interest on my twitter account below (if you like them, retweet, and follow me) and follow my blogs. Always good, incisive and entertaining poems on my blogs—click on the links below. Go to www.alaskanpoet.blogspot.com for Ridley’s Believe It Or Not—This Day in History,  poems to inspire, touch, emote, elate and enjoy and poems on breaking news items of importance or go to  Ridley's Believe It Or Not for just This Day in History.

© March 1, 2022,  Michael P. Ridley aka The Alaskanpoet
Alaskanpoet for Hire, Poems to Admire
Poet Extraordinaire, Beyond Compare
A Unique Gift, All Recipients Receive a Lasting Lift


Posted by Michael P. Ridley aka the Alaskanpoet at 9:48 PM