March 12, 2022 Ridley's Believe It Or Not World Day Against Cyber Censorship

CV World Cases: The planet continues with cases still increasing but the increase slowing down with cases now over 457 million at 457,246,854 cases,  60,721,922 of which are active, 396,524,932 closed with 390,462,129 recoveries (98.47%), and crossing the 6,000,000 barrier 6,062,283 deaths (1.53% )to continue the low trend of increased cases with increased recovery percentages and decreased death percentages with some plateaus, dips, and rises.
CV USA Cases: Total cases now passing 81 million at 81,169,534 with 24,260,703 active cases  of which 4389 are serious or critical, (15,517 on 12/12) (back to steady decreases despite the increase in active cases due to the relative mildness of the Omicron variant) to .0181% of active cases (back to back steady decreases despite the increase in active cases due to the relative mildness of the Omicron variant  and to increase  the reduction from the 29,271 peak on 12/31/2020 to 24,882, 56,908,831 closures with 993,693 deaths (1.75%) and with 55,915,138 recoveries (98.25%). Our death rate percentage is .21%  higher than the world’s death rate.
Standing: On a deaths per million population measure on a steady but slowing climb to 2973 the U.S. ranks behind Peru (6265) the new number 1 which has had a quantum leap in deaths previously unmatched which was a change in the classification to give Peru the a new method of reporting; Bulgaria (5260), Hungary (4642), Romania (3382),  Brazil (3045), and Poland (3003) and slightly higher than Argentina (2770), Columbia (2689), Belgium (2605), Italy (2600), Russia (2467), Mexico (2447), UK (2376), Chile (2258), Spain (2162), France (2138), Portugal (2098), Ecuador (1952),  Bolivia (1798),  Sweden (1741) that never closed its economy down like we did, and Switzerland (1526).
US Vaccinations: As of 03/12/22   556.3 million doses, 239,153 per day last week ( 75.9%) of population now vaccinated  with at least one shot)  and in California 32,837 per day  (which means at least 82.0% of the population of California has received at least one shot) which many believe is necessary to develop herd immunity (other than Flip Flop Fauci who may believe that 90% is required).  In California 71,979,632 total doses have been given (83.2%  of doses received to exceed the U.S. average of 80.2%), California is still stuck at 12th tied with Illinois and Nevada of the 50 states in terms of the percentage of doses administered as a percentage of doses delivered to the states and at 70.7%% of its population fully vaccinated compared to the U.S. average of 64.6% and has  moved from 12th to 11th   in terms of the percentage of the population fully vaccinated compared to other states (nothing like a recall election to get Newsom’s attention and performance).
Non  CV News: Ukrainian war rages on with Zelenskyy admitting to the loss 1300 troops and slamming the Russians for abducting the besieged city of Metripol; Putin is reported to have arrested his head of intel which may be indicative of his frustration on how slow the invasion is proceeding; Poland is running out of room for the almost 2 million Ukrainian refugees that have fled into the country; while Russia has announced a Kherson plebiscite to secede from the Ukraine; a scathing documentary on the pervasive damaging teaching in our educational system from K-12 to college will come out on March 14; you know that pushing CRT may be a political kiss of death when you hear Bozo O’Rourke coming out against it in his campaign to defeat Governor Abbot in Texas; first it was the “Let’s Go Brandon” to rock stadiums and arenas showing Americans outraged over Biden’s performance and now it is stickers being applied to gas pumps bragging the increase in prices is due to Biden: 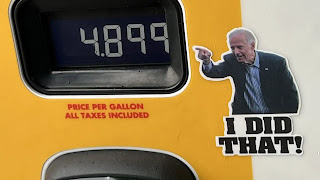 After dragging his feet on ending Russian oil imports, Biden held hostage to the Green New Dealers refuses to call a truce on his war on domestic fossil fuels to increase production; as President Biden is seen begging for Venezuela and Iran to increase oil production to lower the soaring prices here, leave it to the political cartoonist to show what Biden can do well: 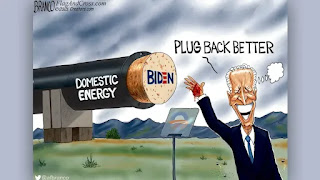 Chicago Gun Violence: Hey Jackass.com is alive and well to collect data to show that through March 11;  2022, gun violence involving mostly persons of color shooting mostly persons of color in Chicago is alive and well with 462 shot of whom 98 have died.
As always, I hope you enjoy today’s holidays and observances, factoids of interest for this day in history, a video recording of “(Love Is Thicker) Than Water” by Andy Gibb; the fact that you have time in your busy life to spatiate; and a quote by Jakub Hlávka and Lisa Bari on the efficacy of travel bans to halt the spread of COVID-19, secure in the knowledge that if you want to send a gift for any memorable events like St. Patrick’s Day, Mothers’ Day, college graduations, birthdays, weddings, or anniversaries, you know that the Alaskanpoet can provide you with a unique customized poem at a great price tailored to the event and the recipient. Please contact me for details on pricing.
1.  World Day Against Cyber Censorship—created by Reporters Without Borders and Amnesty International to promote unrestricted internet access and to fight efforts of governments to censor the internet---a great cause but failing to address a censorship far more dangerous than government censorship which is the censorship by social media companies over content they disagree with.
2.  National Working Moms Day—created by Working Moms of Milwaukee on December 17, 2019 and first celebrated on this day in 2020 to commemorate and honor the importance of moms who have entered the work force and still manage to work as a mom and housekeeper.
3.  1978  Number 1 Song—the number 1 song in 1978  on this day was  “(Love Is) Thicker Than Water” by Andy Gibb  on a run in that position for 2 weeks  to join 19 other number 1 songs while 11 acts  hit the charts at Number 1 for the first time. Here is a video recording of Andy Gibb performing “(Love Is) Thicker Than Water”: Gibb was an English singer songwriter and youngest brother of the Bee-Gees who had great success in the 70’s but struggling with addiction and depression after several rehabs was starting a comeback only to die 5 days after his 30th birthday due to a heart attack caused by a hear weakened by years of heavy cocaine use.
4.  Word of the Day—the word of the day is “spatiate” which means to ramble without a specific destination in mind.
5.  Troika Beat—celebrating the birth on this day in 1922 of Jack Kerouac who with Burroughs and Ginsburg were pioneers of the “Beat Generation and who was a prolific author and died too early on October 21, 1969 of an abdominal hemorrhage caused by a lifetime of heavy drinking.
On this day in:
a. 1933 as the Great Depression gathers speed, President Roosevelt gave his first “fireside chat” over the radio to calm the nation and promise a future recovery.
b. 1989 Sir Tim Berniers-Lee submitted his proposal for a world management system to CERN which evolved into the internet.
c. 1999 former members of the Warsaw Pact, Czech Republic, Hungary and Poland to Russia’s paranoia joined NATO.
d. 2003 The WHO formally notifies the world of the  outbreak of the SARS virus (severe acute respiratory syndrome).64.
e. 2020 the U.S. suspended travel to Europe due to the COVID-19 pandemic.
Reflections on travel bans as a means to fight COVID-19: “ Travel bans were first introduced in late January, 2020 and  extended in March and May, as a way to protect the American public from widespread introduction of SARS-CoV-2, the virus that causes Covid-19. At the outset, with limited information about the virulence of the virus and case counts in the U.S., these bans were justified — and could even have been more stringent for a short period of time to buy time and bolster preparedness.
Yet once community spread became the dominant source of transmission, the benefits of travel bans became marginal at best. Extending them does little to help meaningfully reduce the number of infections, since U.S. citizens and residents are still allowed to travel, along with select other visa holders who have been exempted. And these bans have also taken economic and human tolls while creating a false sense of protection and security.
Other tools, including testing mandates, quarantines, and end-to-end contact tracing, will make a much bigger difference at a fraction of the cost.”  Jakub Hlávka .PhD USC Medical Center and Lisa Bari Interim CEO of the Strategic Health Information Exchange Collaborative, Jan. 22, 2021
Please enjoy the poems on events of interest on my twitter account below (if you like them, retweet, and follow me) and follow my blogs. Always good, incisive and entertaining poems on my blogs—click on the links below. Go to www.alaskanpoet.blogspot.com for Ridley’s Believe It Or Not—This Day in History,  poems to inspire, touch, emote, elate and enjoy and poems on breaking news items of importance or go to  Ridley's Believe It Or Not for just This Day in History.

© March 12, 2022,  Michael P. Ridley aka The Alaskanpoet
Alaskanpoet for Hire, Poems to Admire
Poet Extraordinaire, Beyond Compare
A Unique Gift, All Recipients Receive a Lasting Lift

Posted by Michael P. Ridley aka the Alaskanpoet at 3:21 PM