CV World Cases: The planet continues with cases still increasing but the increase slowing down with cases now over 441 million at 447,627,027 cases,  60,467,044 of which are active, 387,160,203 closed with 381,135,119 recoveries (98.44%), and crossing nearing the 6,000,000 barrier 6,025,084 deaths (1.56% )to continue the low trend of increased cases with increased recovery percentages and decreased death percentages with some plateaus, dips, and rises.
CV USA Cases: Total cases now nearing 81 million at 80,941,707 with 25,113,170 active cases  of which 5983  are serious or critical, (15,517 on 12/12) (back to steady decreases despite the increase in active cases due to the relative mildness of the Omicron variant) to .024 % of active cases (back to back steady decreases despite the increase in active cases due to the relative mildness of the Omicron variant  and to increase  the reduction from the 29,271 peak on 12/31/2020 to 23,288, 55,828,537 closures with 984,651 deaths (1.76%) and with 54,843,886 recoveries (98.24%). Our death rate percentage is .20%  higher than the world’s death rate.
Standing: On a deaths per million population measure on a steady but slowing climb to 2946 the U.S. ranks behind Peru (6257) the new number 1 which has had a quantum leap in deaths previously unmatched which was a change in the classification to give Peru the a new method of reporting; Bulgaria (5236), Hungary (4619), Romania (3364),  Brazil (3033), and Poland (2979) and slightly higher than Argentina (2764), Columbia (2686), Belgium (2592), Italy (2587), Mexico (2438), Russia (2444), UK (2366), Chile (2209), Spain (2150), France (2129), Portugal (2091), Ecuador (1949),  Bolivia (1798),  Sweden (1713) that never closed its economy down like we did, and Switzerland (1518).
US Vaccinations: As of 03/06/22   555.2 million doses, 341,375 per day last week ( 75.8%) of population now vaccinated  with at least one shot)  and in California 57,271 per day  (which means at least 81.9% of the population of California has received at least one shot) which many believe is necessary to develop herd immunity (other than Flip Flop Fauci who may believe that 90% is required).  In California 71,834,166 total doses have been given (83.3%  of doses received to exceed the U.S. average of 80.3%), California has moved  from 12th  to 11th of the 50 states in terms of the percentage of doses administered as a percentage of doses delivered to the states and at 70.6%% of its population fully vaccinated compared to the U.S. average of 64.5% and has  moved from 12th   to 11th  in terms of the percentage of the population fully vaccinated compared to other states (nothing like a recall election to get Newsom’s attention and performance).
Non  CV News: As we continue to line Putin’s pockets with the oil we are continuing to purchase from him so he can purchase more missiles, shells and bullets to kill Ukrainian civilians, the price of gasoline in the U.S. since 2008 (what does Biden not understand why we must stop the importing Russian oil?); 12 days into his invasion of Ukraine and some 1.7 million plus refugees have fled (though men and some women are returning to fight the Russians); the Ukrainian armed forces are still fighting but pleading for more anti-tank guns and missiles, anti-aircraft missiles  and Soviet era jet fighter planes from former Warsaw Pact countries to thwart Russian bombing of civilian targets; whatever hope Putin had of quick and easy victory over the Ukrainians seems to have disappeared and the longer he is bogged downed the more sanctions will cripple his economy and the more body bags weighed down with Russian young men and teens will be arriving back in Russia; Fox News continues to standout as the most vociferous network to attack Biden’s domestic oil production restrictions, raising the obvious question why are we not asking for increased production here as opposed to Venezuela and Iran; RT editor-in-chief in Moscow has resigned over the invasion by Russia of Ukraine and should be fearing for her life while still in Moscow unable to leave because of her small child and the child’s fathers objections to his leaving; Chuck Todd of MSNBC has shed any shred of objectivity on the economy and the Russian invasion of Ukraine trying to refute the inflation news, supply chain issues and whether Russia would have invaded had Trump been in office (Chuck is going to have to come to grips with the fact that Americans are not stupid and that lack of stupidity explains why Biden’s rating polls are sinking really fast; Zelenskyy is going to be awarded the Ronald Reagan Freedom Award for his courageous stand against Russia (completely appropriate but Iron Domes in several Ukraine cities would be far more welcome and appropriate); Whoopi Goldberg made a fool out of herself once again on The View inanely claiming Trump would have just handed Ukraine over to the Russians; a Ridley not related to the Alaskanpoet was in the sports news as Atlanta Falcon receiver Calvin Ridley was suspended for the 2022 season for betting on pro football games; the Russian invasion of Ukraine is a tragedy but at least here a silver lining in that we seem to have been spared from Fauci’s rants about following the science which the political cartoonist reveals as being prompted by the elections and not the Russian invasion: 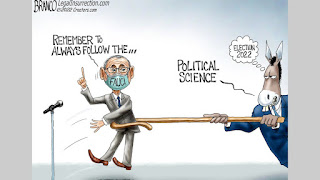 Chicago Gun Violence: Hey Jackass.com is alive and well to collect data to show that through March 6, 2022, gun violence involving mostly persons of color shooting mostly persons of color in Chicago is alive and well with 448 shot of whom 93 have died.
As always, I hope you enjoy today’s holidays and observances, factoids of interest for this day in history, a recording of “Season in the Sun” by Terry Jacks; the fact while your sounders might not you would enjoy today’s food holiday; and a quote by Madelaine Albright on the reoccupation of the Rhineland prohibited by the Versailles treaty, secure in the knowledge that if you want to send a gift for any memorable events like Valentine’s Day or St. Patrick’s Day, college graduations, birthdays, weddings, or anniversaries, you know that the Alaskanpoet can provide you with a unique customized poem at a great price tailored to the event and the recipient. Please contact me for details on pricing.
1.  Plant Power Day—created by Alpro, a European plant based company, on this day in 2018, to promote plants as the main course of meals and relegate meat and fish to side dishes like the dining equivalent of a hybrid auto.
2.  National Crown Roast of Pork Day—celebrating a meal fit for king or queen consisting of pork ribs arranged in a circle with the ends pointed upwards and the center filled with potatoes and vegetables or stuffing as a culinary response of carnivores to Plant Power Day.
3.  1974  Number 1 Song—the number 1 song in 1974  on this day was  “Seasons in the Sun” by Terry Jacks  on a run in that position for 3 nonconsecutive weeks  to join 35 other number 1 songs and 13 other acts that  hit the charts at Number 1 for the first time. Here is a recording of Terry Jacks performing “Seasons in the Sun": https://www.youtube.com/watch?v=YG9otasNmxI. Jacks was a Canadian singer whose “Seasons in the Sun" sold 14 million records which probably explains how he was able to exit from music in the late 70’s and become an environmental activist in the 80’s and still with us today.
4.  Word of the Day—the word of the day is “sounder” which means a herd of pigs which given today’s food holiday are probably keeping a low profile out of sight.
5.  Erasing the Past—celebrating the birth on this day in 1944 of noted singer, guitarist and songwriter Townes Van Zandt who suffered at an early age of being manic depressive which prompted his parents to have him undergo insulin shock therapy which destroyed his long term memory.  He struggled with addiction and alcoholism often appearing to perform high on drugs or so intoxicated he couldn’t remember the lyrics and despite his wife being warned that detoxing a long term alcoholic would kill him after falling and breaking a hip his wife allowed him to check out of the hospital after surgery where he quickly started to go into delirium tremens  which subsided momentarily after a flask of vodka before he soon stopped breathing and CPR would not revive him and he died on January 1, 1997 at age 52.
On this day in:
a. 1936 Hitler sent his troops to occupy the Rhineland which was prohibited under the Treaty of Versailles and the Locarno Pact which prompted no response from Britain and France who did not know that if British and French troops had appeared, the Germans were under orders to immediately retreat, which appeasement started Europe on the road to World War II with the subsequent attack on Poland in 1939.
b. 1965 a group of 500 Civil Rights Protestors peacefully marching to the state capital Montgomery were brutally attacked by Bull Connors’  Selma police and Alabama State Troopers trying to cross a bridge which attacks and beatings to the horror of Americans watching television were captured live.
c. 1986 divers from the USS Preserver located the crew cabin of the Space Shuttle Challenger which had exploded 73 seconds after liftoff.
d. 1989 the United Kingdom and Iran sever diplomatic relations due to the publication of Salman  Rushdie and his book The Satanic Verses  which Iran and the Muslim world viewed as a blasphemous attack on the Prophet Mohammed.
e. 2007 the House of Commons voted to make all the seats in the House of Lords subject to election.
Reflections on the occupation of the Rhineland by German forces in 1936: “ The Nazis’ entrance upon the European stage did not, at first, alarm the British. After all, under the Versailles treaty, the size of the German army and navy was limited and the defeated country was forbidden to maintain an air force. The wake-up bell began sounding when, in March 1935, Hitler renounced the treaty and declared that his country would indeed rebuild its military. The following year, when Germany reoccupied the Rhineland, Britons were unsettled to learn that his army was already three times the legal size and that his air or Luftwaffe, would surpass their own.” Madelaine Albright, Secretary of State under President Clinton
Please enjoy the poems on events of interest on my twitter account below (if you like them, retweet, and follow me) and follow my blogs. Always good, incisive and entertaining poems on my blogs—click on the links below. Go to www.alaskanpoet.blogspot.com for Ridley’s Believe It Or Not—This Day in History,  poems to inspire, touch, emote, elate and enjoy and poems on breaking news items of importance or go to  Ridley's Believe It Or Not for just This Day in History.

© March 7, 2022,  Michael P. Ridley aka The Alaskanpoet
Alaskanpoet for Hire, Poems to Admire
Poet Extraordinaire, Beyond Compare
A Unique Gift, All Recipients Receive a Lasting Lift

Posted by Michael P. Ridley aka the Alaskanpoet at 10:07 PM