March 25, 2022 Ridley's Believe It Or Not National Medal of Honor Day

CV World Cases: The planet continues with cases still increasing but the increase slowing down with cases now passing 473 million at 478,924,735 cases,  59,196,689 of which are active, 419,728,046 closed with 413,591,449 recoveries (98.54%), and crossing the 6,000,000 barrier 6,136,597 deaths (1.46% )to continue the low trend of increased cases with increased recovery percentages and decreased death percentages with some plateaus, dips, and rises.
CV USA Cases: Total cases now passing 81 million at 81,574,881 with 16,686,949 active cases  of which 2632 are serious or critical, (15,517 on 12/12) (back to steady decreases despite the increase in active cases due to the relative mildness of the Omicron variant) to .0158% of active cases (back to back steady decreases despite the increase in active cases due to the relative mildness of the Omicron variant  and to increase  the reduction from the 29,271 peak on 12/31/2020 to 26,639 with 64,887,932 closures with 1,002,647 deaths (1.55%) and with 63,885,285  recoveries (98.45%). Our death rate percentage is .09%  higher than the world’s death rate.
Standing: On a deaths per million population measure on a steady but slowing climb to 2999 the U.S. ranks behind Peru (6280) the new number 1 which has had a quantum leap in deaths previously unmatched which was a change in the classification to give Peru the a new method of reporting; Bulgaria (5307), Hungary (4706), Romania (3411),  Brazil (3060), and Poland (3037) and slightly higher than Chile (2898), Argentina (2783), Columbia (2693), Italy (2630), Belgium (2626), Russia (2510), Mexico (2456), UK (2401),  Spain (2189), France (2159), Portugal (2110), Ecuador (1956),  Bolivia (1798),  Sweden (1765) that never closed its economy down like we did, and Switzerland (1557).
US Vaccinations: As of 03/25/22   559.3 million doses, 267,983 per day last week (76.1%) of population now vaccinated  with at least one shot)  and in California 34,265 per day  (which means at least 82.3% of the population of California has received at least one shot) which many believe is necessary to develop herd immunity (other than Flip Flop Fauci who may believe that 90% is required).  In California 72,454,298 total doses have been given (83.0%  of doses received to exceed the U.S. average of 80.0%), California has moved from 10th to 12th tied with Nevada  of the 50 states in terms of the percentage of doses administered as a percentage of doses delivered to the states and at 71.0% of its population fully vaccinated compared to the U.S. average of 64.8% and has  not moved from 12th  in terms of the percentage of the population fully vaccinated compared to other states (nothing like a recall election to get Newsom’s attention and performance).
Non  CV News: Day 30 of the Russian invasion of Ukraine as Biden visits Poland, ground zero for over 2.2 refugees fleeing from Russian barbarity with over half children with large numbers of women and men too old for military service, and promises $1 billion in humanitarian aid to the refugees there and a willingness to accept 100,000 Ukrainian immigrants (sadly a billion is a mere drop in the bucket and no news of further needed arms shipments to halt and declaw the Russian bear ( Iron Domes would protect cities and anti-aircraft missiles batteries would create no fly zones without any planes and would bolster Ukrainian counterattacks); Russian Col. Gen. Mikhail Mizintsev has earned the nickname "Butcher of Mariupol" for his role in the Russian bombing and missile attacks that have leveled the town with large numbers of civilians including children (rightly name as he learned his craft in leveling Aleppo in Syria and hopefully can be located to be killed by a drone strike piloted by Ukrainians); SCOTUS has ruled pending rulings in the lower courts that the Pentagon can limit service of unvaccinated members of the military; the White House has posted a declaration praising  activist Yuri Kochiyama, who was a public admirer of terrorist Usama bin Laden and Mao and his Great Leap Forward that led to massive starvation in Red China; as a result of tax credits and stimulus payments, 57% of all U.S. households paid no income taxes last year; Biden’s new Red Line against Putin using chemical weapons in Ukraine that would result in “an in kind response” lasted 1 day as Jake Sullivan clarified that under no circumstances would we use chemical weapons but solemnly intoned that Russia would suffer “a severe penalty ”; the Ukraine relief fund being raised by Fox for the Red Cross has now raised over $12 million (wonder how many millions have been raised if any by the MSM); with inflation soaring off the charts due to government spending and supply shortages which in gas of oil and gas are directly related to Biden’s war on fossil fuels, House Majority Leader has apprised Blues that another COVID Relief spending bill is heading their way; The Nation correspondent Elie Mystal was ranting that our Constitutions was “no good” and “actually trash” because no non-whites were allowed to participate  (wonder how many slaves or freed slaves in 1787 were educated but do know that a significant number of nonwhite delegates were troubled by slavery and were probably critical in having Northern states ban slavery before the Civil War; while many on the left on under the banner of transgender rights and protests against transgender phobia applaud transgender males competing in women’s sports, many do not, feeling that it is the end of Title IX and women’s sports but leave it to the political cartoonist to portray the effects of transgender males competing as women: 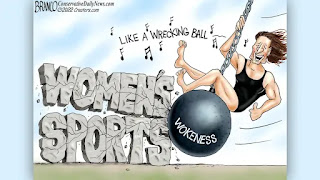 Chicago Gun Violence: Hey Jackass.com is alive and well to collect data to show that through March 24,  2022, gun violence involving mostly persons of color shooting mostly persons of color in Chicago is alive and well with 585 shot of whom 111 have died.
As always, I hope you enjoy today’s holidays and observances, factoids of interest for this day in history, a video recording of “Lean on Me” by Club Nouveau; the fact that your neighborhood unlike those of Feces City has not been overrun by spivs; and a quote by Marcel H. Van Herben on Russia’s ethnic cleansing past, secure in the knowledge that if you want to send a gift for any memorable events like St. Patrick’s Day, Mothers’ Day, college graduations, birthdays, weddings, or anniversaries, you know that the Alaskanpoet can provide you with a unique customized poem at a great price tailored to the event and the recipient. Please contact me for details on pricing.
1.  National Medal of Honor Day—created by legislation signed into law on November 15, 1990 and first celebrated on this day in 1991 to honor the recipients of the Congressional Medal of Honor and to promote awareness of the importance of the recipients’ deeds and sacrifices to the wellbeing on this nation.
2.  International Day of the Unborn Child—created by El Salvador in 1993 to coincide with the day of the Feast of Annunciation and observed by a large number of South American Countries promoting the right of the unborn child to be born.+
3.  1987  Number 1 Song—the number 1 song in 1987  on this day was  “Lean on Me” by Club Nouveau in that position for 2 weeks to join 29 other number 1 songs and 15 other acts that  hit the charts at Number 1 for the first time. Here is a video recording of Club Nouveau performing “Lean On Me”:   https://www.youtube.com/watch?v=kbyjaUJWWmk Club Nouveau was a 5 person band that started in 1986 and is still active today although it has not had a charted album since 1992 or a hit single since 1995.                           4.  Word of the Day—the word of the day is “spiv” is a petty criminal who deals in illicit goods usually drugs who police can arrest until the cows come home but not dent the flow of drugs like fentanyl that are killing young Americans by the thousands.                                   5.  Don’t Need to See to Play a Guitar—celebrating the birth on this day in 1966 Canadian born guitarist Jeff Healey who lost both eyes due to a cancer of the eye but overcame being blind to become a successful guitarist and singer, playing his guitar sitting down with it on his lap. An occasional smoker he was diagnosed with lung cancer of January 7, 2007 and died from it on March 2, 2008 at age 41, 1 month before the release of his first album Mess of Blues in 8 years.
On this day in:
a. 1911 a fire broke out in the Triangle Shirtwaist Factory in Manhattan that killed 146 workers, all but 23 of whom were women and injured 76; the deaths were not in vain as legislature was soon passed to improve safety standards for factory workers and the tragedy spurred the creation of the International Ladies Garment Workers Union to fight for better workers’ conditions.
b. 1949 in a move which appears to being duplicated in the Ukraine with families with children being abducted to Russia, 92,000 kulaks were deported from the Baltic Republics to Siberia.
c. 1965 after the first march from Selma resulted in Bloody Sunday and the second in the death of a marcher, the third march which had started on March 21 and led by Martin Luther King, Jr. and protected by 1900 nationalized members of the Alabama National Guard arrived at the Alabama State Capitol on this day having been swelled along to the way to 25,000 to protest against blacks being denied the right to vote.
d. 1995 to the lovers of knowledge and erroneous knowledge the first wiki WikiWikiWeb and part of the Portland Repository was made public by Ward Cunningham.                  e. 1996 the European Union banned the export of British beef due to the deadly pandemic of mad cow disease.
Reflections on Russian ethnic cleansing past and present now in Ukraine: “We should, however, not forget that ethnic cleansing, especially of nonwhite Muslim peoples, has old historical roots in Russia. John Dunlop, for instance, reminds us that “in May 1856, Count Kiselev, minister of state domains, informed officials in the Crimea that Alexander [tsar Alexander II] was interested in ‘cleansing’ (Kiselev used the verb oshishchat’) Crimea of as many Tatars as possible.” That the tsarist empire was interested in annexing foreign lands, but not in annexing foreign peoples, was expressed by the famous remark of a tsarist diplomtat. “Russia needs Armenia but does not need Armenians.  ― Marcel H. Van Herpen, Putin's Wars: The Rise of Russia's New Imperialism.
Please enjoy the poems on events of interest on my twitter account below (if you like them, retweet, and follow me) and follow my blogs. Always good, incisive and entertaining poems on my blogs—click on the links below. Go to www.alaskanpoet.blogspot.com for Ridley’s Believe It Or Not—This Day in History,  poems to inspire, touch, emote, elate and enjoy and poems on breaking news items of importance or go to  Ridley's Believe It Or Not for just This Day in History.

© March 25, 2022,  Michael P. Ridley aka The Alaskanpoet
Alaskanpoet for Hire, Poems to Admire
Poet Extraordinaire, Beyond Compare
A Unique Gift, All Recipients Receive a Lasting Lift

Posted by Michael P. Ridley aka the Alaskanpoet at 10:50 PM