March 8, 2022 Ridley's Believe It Or Not International Women's Day

CV World Cases: The planet continues with cases still increasing but the increase slowing down with cases now over 449 million at 449,429,123 cases,  59,821,008 of which are active, 389,608,115 closed with 383,574,196 recoveries (98.45%), and crossing the 6,000,000 barrier 6,033,919 deaths (1.55% )to continue the low trend of increased cases with increased recovery percentages and decreased death percentages with some plateaus, dips, and rises.
CV USA Cases: Total cases now passing 81 million at 81,002,810 with 24,837,583 active cases  of which 5584 are serious or critical, (15,517 on 12/12) (back to steady decreases despite the increase in active cases due to the relative mildness of the Omicron variant) to .022 % of active cases (back to back steady decreases despite the increase in active cases due to the relative mildness of the Omicron variant  and to increase  the reduction from the 29,271 peak on 12/31/2020 to 23,687, 56,165,227 closures with 987,269 deaths (1.76%) and with 55,177,958 recoveries (98.24%). Our death rate percentage is .21%  higher than the world’s death rate.
Standing: On a deaths per million population measure on a steady but slowing climb to 2954 the U.S. ranks behind Peru (6258) the new number 1 which has had a quantum leap in deaths previously unmatched which was a change in the classification to give Peru the a new method of reporting; Bulgaria (5242), Hungary (4626), Romania (3369),  Brazil (3035), and Poland (2985) and slightly higher than Argentina (2765), Columbia (2687), Belgium (2595), Italy (2590), Mexico (2438), Russia (2449), UK (2371), Chile (2231), Spain (2156), France (2131), Portugal (2094), Ecuador (1952),  Bolivia (1798),  Sweden (1716) that never closed its economy down like we did, and Switzerland (1522).
US Vaccinations: As of 03/08/22   555.4 million doses, 308,726 per day last week ( 75.8%) of population now vaccinated  with at least one shot)  and in California 44,883 per day  (which means at least 81.9% of the population of California has received at least one shot) which many believe is necessary to develop herd immunity (other than Flip Flop Fauci who may believe that 90% is required).  In California 71,870,974 total doses have been given (83.3%  of doses received to exceed the U.S. average of 80.3%), California has moved  from 11th to 10th of the 50 states in terms of the percentage of doses administered as a percentage of doses delivered to the states and at 70.6%% of its population fully vaccinated compared to the U.S. average of 64.5% and has  moved from 11th to 12th   in terms of the percentage of the population fully vaccinated compared to other states (nothing like a recall election to get Newsom’s attention and performance).
Non  CV News: Finally after almost it seems being dragged kicking and screaming to act, Biden has banned the importing of Russian petroleum products to the United States and then with a straight face lying to say  he will do everything possible to bring on more domestic oil production; while Ukraine wishes it had some Iron Domes to protect its cities and nuclear power plants, at least the U.S. is aiding NATO countries to beef up their air defense systems as it announced it was sending 2 Patriot anti-missile batteries to Poland; after Putin signed a new law imposing up to 15 years in prison for reporting “false information” about Russia’s invasion of Ukraine, like calling it an invasion not a “special military operation”, the New York Times is pulling its reporters out of Russia; a snag has developed involving Poland’s offer to send Russian jets to Ukraine to be piloted by Ukrainian pilots to fight the Russians with Poland wanting to send them to an American air base in Germany and then have them flown to Ukraine which the Biden Administration is opposing; an estimated over 2,000,000 refugees have fled Ukraine and U.S. officials are estimating some 3,000 Russians have been killed in the fighting; MacDonald’s has announced that it is temporarily suspending operations in Russia; Putin is expected to double down as the invasion is going much slower than anticipated by him and is threatening to stop energy exports to Europe if the U.S. and Europe bans Russian imports; the World Bank has approved a $700 million loan to Ukraine but suspect the funds may not be used for what Ukraine needs—weapons to knock down planes and destroy tanks; as gas prices soar look for the green new dealers to have a hard time not showing their joy that higher gas prices will force Americans to buy more EV’s (Colbert who probably drives a Tesla most Americans cannot afford was intoning that he would be more than happy to pay $15 a gallon for gas and quite properly was mocked); a 77 year old customer used a “racial slur” in a Tampa Dunkin Donuts against an employee who then hit him and killed him and today after a plea deal on a felony manslaughter charge was sentenced to 200 hours of community service and 2 years of house arrest and required to attend anger management classes (what about employees taking anger management classes to curb anger at outrageous customers); Biden was praised by Blues and roasted by Reds and Indies but the most damming critique of his SOTUS rests with the image supplied by the political cartoonist that probably comes closest to the issue of Biden’s fitness to be president: 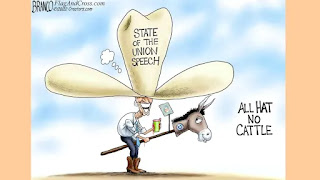 Chicago Gun Violence: Hey Jackass.com is alive and well to collect data to show that through March 7, 2022, gun violence involving mostly persons of color shooting mostly persons of color in Chicago is alive and well with 448 shot of whom 93 have died.
As always, I hope you enjoy today’s holidays and observances, factoids of interest for this day in history, a recording of “Have You Ever Been Mellow” by Olivia Newton-John; the fact that most of your sovenances are pleasant ones; and an inspiring quote by Melinda Gates for International Women’s Day, secure in the knowledge that if you want to send a gift for any memorable events like St. Patrick’s Day, Mothers’ Day, college graduations, birthdays, weddings, or anniversaries, you know that the Alaskanpoet can provide you with a unique customized poem at a great price tailored to the event and the recipient. Please contact me for details on pricing.
1.  International Women’s Day—created by the UN General Assembly in 1977 to call upon member nations to celebrate the importance of women in workplace and to promote equal pay, safe working conditions and an end to gender bias in the workplace.
2.  International Women’s Collaboration Brew Day—created by Sophie de Ronde in 2013 and first celebrated on this day in 2014 to promote women brew masters in an industry that is dominated by males and to raise funds for the Pink Boots Society, a 501(c)(3) that provides mentoring to women in the brewing industry and scholarships for women to learn the craft of brewing beer.
3.  1975  Number 1 Song—the number 1 song in 1975  on this day was  “Have You Ever Been Mellow” by Olivia Newton-John on a run in that position for 1 week  to join 34 other number 1 songs while 18 acts  hit the charts at Number 1 for the first time. Here is a recording of Olivia Newton-John performing “Have You Ever Been Mellow”: https://www.youtube.com/watch?v=t2S1nmxYmUg. This British born Australian singer has been performing since she was 15 and perhaps is best known for her role in the movie Grease. She is now fighting stage 4 breast cancer at the age of 73.
4.  Word of the Day—the word of the day is “sovenance” which means  remembrance or memory which sadly watching our president it seems most of his have faded away.
5.  Winters Can Be Grim—celebrating the birth on this day in 1930 of New York Yankee and Kansas City Athletics  pitcher Robert Grim who was named AL Rookie of the Year in 1954 with a 20-6 record found his way into the bullpen due to arm problems and retired from MLB in 1962. He died from a heart attack on October 23, 1996 in Shawnee, Kansas while throwing snowballs with neighborhood kids.
On this day in:
a. 1775 an anonymous writer often thought to be Thomas Paine wrote a pamphlet entitled “African Slavery in America” which advocated the emancipation of slaves which had its advice been heeded would have spared this nation the agony of the Civil War, Jim Crow, race riots and the plague of CRT in our schools.
b. 1979 to the join of music lovers everywhere Phillips demonstrated the compact disc for the first time.
c. 1983 President Ronald Reagan at a speech before U.S. Evangelicals labeled the Soviet Union the “evil empire,” a term that, given Putin’s unprovoked attack on Ukraine, should be resurrected again today.
d. 2014 Malaysia Airlines Flight 370 from Kuala Lumpur to Beijing with 239 passengers  disappeared from radar contact 200 miles into its flight and was never located but presumed to have run out of fuel and crashed in the Indian Ocean.
e. 2021 International Women’s Day Parades in Mexico turned violent where in Mexico City, 62 police officers and 19 civilians were injured.
Reflections on International Women’s Day: “ A woman with a voice is by definition a strong woman. But the search to find that voice can be remarkably difficult.” –Melinda Gates
Please enjoy the poems on events of interest on my twitter account below (if you like them, retweet, and follow me) and follow my blogs. Always good, incisive and entertaining poems on my blogs—click on the links below. Go to www.alaskanpoet.blogspot.com for Ridley’s Believe It Or Not—This Day in History,  poems to inspire, touch, emote, elate and enjoy and poems on breaking news items of importance or go to  Ridley's Believe It Or Not for just This Day in History.

© March 8, 2022,  Michael P. Ridley aka The Alaskanpoet
Alaskanpoet for Hire, Poems to Admire
Poet Extraordinaire, Beyond Compare
A Unique Gift, All Recipients Receive a Lasting Lift

Posted by Michael P. Ridley aka the Alaskanpoet at 6:24 PM