CV World Cases: The planet continues with cases still increasing but the increase slowing down with cases now passing 484 million at 484,827,400 cases,  60,002,702 of which are active, 424,824,698 closed with 418,669,491 recoveries (98.55%), and crossing the 6,000,000 barrier 6,155,207 deaths (1.45% )to continue the low trend of increased cases with increased recovery percentages and decreased death percentages with some plateaus, dips, and rises.
CV USA Cases: Total cases now passing 81 million at 81,670,147 with 15,939,836 active cases  of which 2283 are serious or critical, (15,517 on 12/12) (back to steady decreases despite the increase in active cases due to the relative mildness of the Omicron variant) to .0143% of active cases (back to back steady decreases despite the increase in active cases due to the relative mildness of the Omicron variant  and to increase  the reduction from the 29,271 peak on 12/31/2020 to 26,998 with 65,730,311 closures with 1,004,681 deaths (1.53%) and with 64,725,630  recoveries (98.47%). Our death rate percentage is .08%  higher than the world’s death rate.
Standing: On a deaths per million population measure on a steady but slowing climb to 3005 the U.S. ranks behind Peru (6283) the new number 1 which has had a quantum leap in deaths previously unmatched which was a change in the classification to give Peru the a new method of reporting; Bulgaria (5320), Hungary (4719), Romania (3416),  Brazil (3064), and Poland (3043) and slightly higher than Chile (2910), Argentina (2787), Columbia (2694), Italy (2637), Belgium (2633), Russia (2520), Mexico (2459), UK (2408),  Spain (2189), France (2167), Portugal (2124), Ecuador (1956),  Bolivia (1798),  Sweden (1768) that never closed its economy down like we did, and Switzerland (1560).
US Vaccinations: As of 03/28/22   559.5 million doses, 246,375 per day last week (76.1%) of population now vaccinated  with at least one shot)  and in California 30,759 per day  (which means at least 82.4% of the population of California has received at least one shot) which many believe is necessary to develop herd immunity (other than Flip Flop Fauci who may believe that 90% is required).  In California 72,488,669 total doses have been given (83.2%  of doses received to exceed the U.S. average of 80.0%), California has moved from 12th to 11th of the 50 states in terms of the percentage of doses administered as a percentage of doses delivered to the states and at 71.0% of its population fully vaccinated compared to the U.S. average of 64.8% and has  not moved from 12th  in terms of the percentage of the population fully vaccinated compared to other states (nothing like a recall election to get Newsom’s attention and performance).
Non  CV News: Day 34 of the Russian invasion of Ukraine which around Kviv the Russians are redeploying troops from KVIV to continue attacks in Eastern Ukraine not withdrawing them as “negotiations” continue in Turkey and  Ukraine without enough missiles and planes stop or at least the decrease the quantity of missiles, bombs and shells being rained on its civilian is pleading with Biden and NATO for more than just supportive words and is demanding iron clad guarantees from “leading armies” 3 of whom possess nuclear weapons if it is attacked by Russia again in the future; n three e; Biden’s adlib to U.S. troops in Poland seemed to imply they would be going to Ukraine which they are not but later as what is becoming the Biden 2 step his announcement they were training Ukrainian troops in Poland disclosed a fact not already having been disclosed; Russia is claiming that 2 small villages in Russia near the border with Ukraine had to be evacuated due to being shelled from Ukraine;  Fox News cameraman Pierre Zakrzewski who was killed Ukraine covering the war was buried in Ireland today; the successful efforts of the MSM and social media giants to quash the Hunter Biden laptop scandal which probably helped immensely in electing Biden may be unraveling as Senators Grassley and Johnson on the Senate floor are alleging Hunter received $100,000 from Russian oligarchs and supposedly have the receipts to prove it; Jim Carrey blasted the Hollywood celebs at the Oscars who applauded Will Smith after he sucker slapped Chris Rock after his joke in poor taste about his wife; Walt Disney must be rolling in his grave as the “it’s a small world” company has morphed into “it’s a woke world” company as leaked videos show the company promoting the LBGT lifestyle and removing signs for “men” and “women” at its parks to avoid offending transgenders; in the dueling governors Newsom has attacked DeSantis for his COVID-19 policies and opposition to progressives’ ideologies in K-12 while DeSantis fired back that actions of people leaving California speak louder than words; Miranda Devine, journalist and author of Laptop from Hell, is predicting bombshells on Hunter Biden’s shady deals as the IRS tax evasion probe continues (wonder whether the “Big Guy” will be snared); Nielsen, the media data collecting group, is going to be acquired by a private equity group for $16 billion; the latest scam at universities are the Diversity, Equity and Inclusion “experts” who are raking in higher salaries than many full fledged professors while students are crushed with high student debt loads;  as Judge Jackson has been ridiculed on her inability to indicate what a woman is, leave it to the political cartoonist to suggest there is a lot more hidden leftist judicial baggage that meets the eye that may derail her nomination: 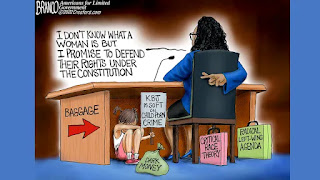 Chicago Gun Violence: Hey Jackass.com is alive and well to collect data to show that through March 28,  2022, gun violence involving mostly persons of color shooting mostly persons of color in Chicago is alive and well with 607 shot of whom 113 have died.
As always, I hope you enjoy today’s holidays and observances, factoids of interest for this day in history, a video recording of “The Living Years” by Mike + The Mechanics; the fact that you are quick to see through smoke and mirrors; and 2 quotes by Lieutenant William Calley during trial and one 38 years later, secure in the knowledge that if you want to send a gift for any memorable events like St. Patrick’s Day, Mothers’ Day, college graduations, birthdays, weddings, or anniversaries, you know that the Alaskanpoet can provide you with a unique customized poem at a great price tailored to the event and the recipient. Please contact me for details on pricing.
1.  National Vietnam War Veterans  Day—created on March 28, 2017 when President Trump signed the National Vietnam War Veterans Recognition Act of 2017, to be observed on March 29th  , the anniversary of the withdrawal of the last combat troops in 1973 from South Vietnam.
2.  Smoke and Mirrors Day—celebrating an illusion first mentioned by Johann Georg Schrepfer in 1770 where an beam of light from a lantern would reflect off a mirror to appear or disappear in a plume of smoke. The term is now used to describe efforts by a person to hide things from the audience which is what politicians and bureaucrats are notorious for.
3.  1989  Number 1 Song—the number 1 song in 1989  on this day was  “The Living Years” by Mike + The Mechanics in that position  for 1 week to join 31 other number 1 songs and 11 other acts that  hit the charts at Number 1 for the first time. Here is a video recording of Mike + The Mechanics performing “The Living Years”:   https://www.youtube.com/watch?v=5hr64MxYpgk The band was formed in Dover, England by Mike Rutherford and was disbanded in 2004 following the death of vocalist Paul Young from a heart attack and revived in 2010 by Rutherford with a new set of musicians.
4.  Word of the Day—the word of the day is “spoliate” which means to despoil or plunder which describes what the Russians are doing to the civilian population of Ukraine.
5.  The Last of His Kind—celebrating the birth on this day in 1895 of Ernst Jünger who served in the German Army in World War I and was awarded the Pour le Mérite  for his service, achieved fame as an author and philosopher and served as a captain in the Wehrmacht in Paris until forced to resign due to being indirectly implicated in the July 1944 plot to assassinate Hitler. The Pour le Mérite for military service was discontinued after World War I, and  when he died on February 17, 1998 at the age of 102 he was  the last living recipient of the award for military service.
On this day in:
a. 1971 Lieutenant William Calley was convicted for the premeditated massacre of Vietnamese civilians at Mai Lai and sentenced to life in prison but had his sentenced reduced to 10 years and Nixon ordered him to serve under house arrest at Fort Benning and he ultimately was paroled after being under house arrest for 3 years 4 months.
b. 1999 at the height of the dot.com internet bubble the Dow Jones Industrial Average closed above 10,000 for the first time at 10,006.78.
c. 2010 2 female Islamic terrorists from Dagestan detonated suicide vests at 2 Moscow Metro Stations, killing a total of 40 people and injuring some 100 others.
d. 2014 same sex marriages were performed in Wales and England for the first time.
e. 2017 UK Prime Minister Theresa May invoked Article 50 of the European Union Treaty beginning the process to withdraw from the European Union.
Reflections on Mai Lai from Lieutenant William Calley:   “Well, I was ordered to go in there and destroy the enemy. That was my job on that day. That was the mission I was given. I did not sit down and think in terms of men, women, and children. They were all classified the same, and that was the classification that we dealt with, just as enemy soldiers...I felt then and I still do that I acted as I was directed, and I carried out the orders that I was given, and I do not feel wrong in doing so, sir” On cross examination during his trial
“There is not a day that goes by that I do not feel remorse for what happened that day in Mỹ Lai. I feel remorse for the Vietnamese who were killed, for their families, for the American soldiers involved and their families. I am very sorry.” While speaking to the Kiwanis Club of Greater Columbus on August 19, 2009
Please enjoy the poems on events of interest on my twitter account below (if you like them, retweet, and follow me) and follow my blogs. Always good, incisive and entertaining poems on my blogs—click on the links below. Go to www.alaskanpoet.blogspot.com for Ridley’s Believe It Or Not—This Day in History,  poems to inspire, touch, emote, elate and enjoy and poems on breaking news items of importance or go to  Ridley's Believe It Or Not for just This Day in History.

© March 29, 2022,  Michael P. Ridley aka The Alaskanpoet
Alaskanpoet for Hire, Poems to Admire
Poet Extraordinaire, Beyond Compare
A Unique Gift, All Recipients Receive a Lasting Lift

Posted by Michael P. Ridley aka the Alaskanpoet at 12:30 AM