March 13, 2022 Ridley's Believe It Or Not National Good Smaritan Day

CV World Cases: The planet continues with cases still increasing but the increase slowing down with cases now nearing 459 million at 458,574,939 cases,  60,858,126 of which are active, 397,716,713 closed with 391,650,640 recoveries (98.47%), and crossing the 6,000,000 barrier 6,066,173 deaths (1.53% )to continue the low trend of increased cases with increased recovery percentages and decreased death percentages with some plateaus, dips, and rises.
CV USA Cases: Total cases now passing 81 million at 81,174,677 with 24,109,763 active cases  of which 4250 are serious or critical, (15,517 on 12/12) (back to steady decreases despite the increase in active cases due to the relative mildness of the Omicron variant) to .0176% of active cases (back to back steady decreases despite the increase in active cases due to the relative mildness of the Omicron variant  and to increase  the reduction from the 29,271 peak on 12/31/2020 to 25,021, 57,064,914 closures with 993,811 deaths (1.74%) and with 56,071,103 recoveries (98.26%). Our death rate percentage is .21%  higher than the world’s death rate.
Standing: On a deaths per million population measure on a steady but slowing climb to 2973 the U.S. ranks behind Peru (6266) the new number 1 which has had a quantum leap in deaths previously unmatched which was a change in the classification to give Peru the a new method of reporting; Bulgaria (5262), Hungary (4642), Romania (3384),  Brazil (3045), and Poland (3003) and slightly higher than Argentina (2771), Columbia (2689), Belgium (2605), Italy (2601), Russia (2471), Mexico (2447), UK (2376), Chile (2262), Spain (2162), France (2138), Portugal (2098), Ecuador (1952),  Bolivia (1798),  Sweden (1741) that never closed its economy down like we did, and Switzerland (1526).
US Vaccinations: As of 03/13/22   556.8 million doses, 237,894 per day last week ( 75.9%) of population now vaccinated  with at least one shot)  and in California 32,868 per day  (which means at least 82.1% of the population of California has received at least one shot) which many believe is necessary to develop herd immunity (other than Flip Flop Fauci who may believe that 90% is required).  In California 72,064,239 total doses have been given (83.3%  of doses received to exceed the U.S. average of 80.2%), California is still stuck at 12th tied with Nevada of the 50 states in terms of the percentage of doses administered as a percentage of doses delivered to the states and at 70.7%% of its population fully vaccinated compared to the U.S. average of 64.6% and has not moved from 11th   in terms of the percentage of the population fully vaccinated compared to other states (nothing like a recall election to get Newsom’s attention and performance).
Non  CV News: Ukrainian war rages on with reports coming out that Putin is seeking military and economic aid from China to aid him in conquering a very determined Ukraine (if this is true look for a frosty meeting between Chinese and American officials in Rome on Monday); the war has claimed the first American journalist, Brent Reynaud, killed while reporting in Kviv; getting facts on what is happening is difficult but Ukrainians are claiming that they have shot down 4 Russian jets and 3 helicopters (keep those stingers coming and Russians will get more and more leery of getting anywhere near Kviv); the demonstrations against the Ukraine war are going on across Russia with some 15,000 citizens believe to have been arrested (the more body bags and the lies perpetrated by Putin on why Ukraine was invaded the more Russians may be taking to the streets); a 4th negotiating session will take place between Russia and Ukraine this Monday (difficult to determine what the Ukrainians can offer to Putin that would enable him to save face and withdraw, but world is keeping fingers crossed); in an announcement that shocked the sporting world, Tom Brady indicated he was coming out of retirement to make another run at another Super Bowl ring (Gronkowski on hearing this must be in 7th heaven and the back up QB’s for the Patriots must be in major depression); Jennifer Rubin tweet logo is “I stand with Ukraine” but attacks voters for disapproving inflation policies of Biden but by higher percentages approving banning Russian oil; slight drop in oil prices due most likely to China locking down Shenzhen due to COVID-19 cases; Governor Newsom was ridiculed for his plea to Disney to leave Florida and bring jobs back to California due to its educational law banning gender identification issues earlier that the 3rd grade; in another example that the Big Apple is not a safe place to be even in an museum as 60 year old Gary Cabana is seen jumping over the reception desk at the Manhattan Museum of Modern Art because he was denied admission due to an expired membership card to stab but not kill 2 employees; with gas prices soaring in large part due to Biden’s war on fossil fuels to reduce domestic oil production and gas taxes a significant component of the price, leave it to the political cartoonist to reveal the Blues’ election strategy on blame and gas taxes in Blue run Minnesota: 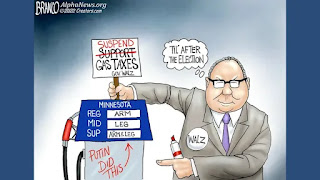 Chicago Gun Violence: Hey Jackass.com is alive and well to collect data to show that through March 12;  2022, gun violence involving mostly persons of color shooting mostly persons of color in Chicago is alive and well with 482 shot of whom 100 have died.
As always, I hope you enjoy today’s holidays and observances, factoids of interest for this day in history, a video recording of “I Will Survive” by Gloria Gaynor; the fact that you are not spavined; and a quote by Arthur Schlesinger, Jr. on Batista’s government predicting a revolution in the future, secure in the knowledge that if you want to send a gift for any memorable events like St. Patrick’s Day, Mothers’ Day, college graduations, birthdays, weddings, or anniversaries, you know that the Alaskanpoet can provide you with a unique customized poem at a great price tailored to the event and the recipient. Please contact me for details on pricing.
1.  The Start of Daylight Saving Time Day—created on the second Sunday in March to spring the clocks forward to save electricity and enjoy more sunshine in the early evening hours.
2.  National Good Samaritan Day—not sure who created this observance or when created but the day March 13 was chosen as it is the anniversary of the day in 1964 that Kitty Genovese was stabbed to death outside her apartment building while her neighbors did not call the police. Although any day is a day to be a Good Samaritan to help someone in danger of injury to life or limb, this is the day to honor those Good Samaritans who risked their lives to help or save someone else, often a complete stranger.
3.  1979  Number 1 Song—the number 1 song in 1979  on this day was  “I Will Survive” by Gloria Gaynor on a run in that position for 3 weeks non continuous  to join 23 other number 1 songs and 9 other acts to  hit the charts at Number 1 for the first time. Here is a video recording of Gloria Gaynor performing “I Will Survive”:  https://www.youtube.com/watch?v=ARt9HV9T0w8  Gaynor was a singer songwriter who was a success full disco wave singer in the 70’s and profited from the disco revival wave and is still performing today and the recipient of her second Grammy 40 years after her first for her gospel album Testimony.
4.  Word of the Day—the word of the day is “spavined” which means old and decrepit which sadly describes Biden mentally and physically.
5.  Not Bogged Down in the Swamp—celebrating the birth on this day in 1916 of Lindy Boggs, wife of long term Congressman Hale Boggs who was killed in 1972 in Alaska in a plane with a fellow Congressman he was campaigning for that disappeared on October 16, 1972 and was never found. Lindy won the special election after his declared death and 8 more elections before retiring in 1991 in almost all elections receiving more that 89% of the vote. Appointed ambassador to the Holy See by President Clinton, she died on July 27, 2013 at the age of 97.
On this day in:
a. 1862 the Fugitive Slave Act of 1950 was annulled by the passage by Congress of the Act Prohibiting the Return of Slaves, laying the ground work for the Emancipation Proclamations.
b. 1954 the Battle of Dien Bien Phu began with an artillery barrage from the hills and caves that surrounded the village directed at the French forces below and ended with a humiliating defeat of the French and the end of the First Indochina War on May 7, 1954.
c. 1957 Cuban student revolutionaries stormed the Presidential Palace in Havana in a failed attempted to assassinate Cuban Dictatory Fulgencio Batista and the students leading the attempt were killed by police.
d. 2020 3 white undercover police officers in Lexington, Kentucky executing a warrant at the apartment of African American Breonna Taylor were shot at by her boyfriend thinking it was a home invasion robbery, hitting one officer in the leg causing them to fire 31 shots through the door hitting Taylor 6 times, killing her. One officer was dismissed and  tried for reckless discharge of a firearm but acquitted and the city paid Ms. Taylor’s family $12 million to settle a wrongful death lawsuit.
e. 2020 one day after the U.S. suspended travel to Europe due to COBID-19 pandemic, President Trump declared a national emergency.
Reflections on why Batista’s rule in Cuba led to Castro’s revolution that overthrew him: “The corruption of the Government, the brutality of the police, the government's indifference to the needs of the people for education, medical care, housing, for social justice and economic justice ... is an open invitation to revolution.” Arthur M. Schlesinger, Jr. noted American historian and speechwriter and adviser to President Kennedy when asked to evaluate Batista’s rule by the U.S. government.
Please enjoy the poems on events of interest on my twitter account below (if you like them, retweet, and follow me) and follow my blogs. Always good, incisive and entertaining poems on my blogs—click on the links below. Go to www.alaskanpoet.blogspot.com for Ridley’s Believe It Or Not—This Day in History,  poems to inspire, touch, emote, elate and enjoy and poems on breaking news items of importance or go to  Ridley's Believe It Or Not for just This Day in History.

© March 13, 2022,  Michael P. Ridley aka The Alaskanpoet
Alaskanpoet for Hire, Poems to Admire
Poet Extraordinaire, Beyond Compare
A Unique Gift, All Recipients Receive a Lasting Lift

Posted by Michael P. Ridley aka the Alaskanpoet at 11:23 AM