August 2, 2021 Ridley's Believe It Or Not National CAD Day

Standing: On a deaths per million population measure on a steady   but slow climb to 1889 the U.S. ranks behind Peru (5869) the new number 1 which has had a quantum leap in deaths previously unmatched which was a change in the classification to give Peru the a new method of reporting to have a fatality rate of 9.31% of total cases now; Hungary the new number 2 has had a huge continuing surge in deaths with the increase now slowing down and improving slightly to  3.86% of its closed cases have died (3117), aping Hungary in terms of increase in deaths Bulgaria (2643),   Brazil (2602) which has been hit with a rapid rise in deaths and cases and passed us and Italy, Columbia newly added to the list  (2355);  Argentina (2323), Belgium (2168), (Italy (2122), Poland (1991), and the UK (1900) which had passed us despite leading world in testing and now has new deaths barely increasing),  and slightly better than Mexico (1848), Chile (1846), Romania (1796), Ecuador newly added to list (1764), (Spain (1745),  France (1711), Portugal (1710), Bolivia (1506),  Sweden (1438) that never closed its economy down like we did, and Switzerland (1250).
Tests: We have now conducted 532,141,068 tests ( 1,597,498/M) just passed by France at 1,620,903 who is now 1st  on a per capital basis for all nations (other than those nations that contain small populations like Bahrain, Denmark, Israel, Malta, Singapore and UAE) other than the U.K. which remains as king of the mountain with respect to tests at 3,609,200/M.
CV Open Gate: Lost in the pronouncements by Biden and his lackeys  that there is no crisis of illegals surging across the border is that fact that COVID-19 is alive and well and spreading in the Northern Triangle and Mexico which has been passed by Argentina and newly added Columbia to move down to 12th  on my list of deaths from the pandemic  at 1848/M with a fatality rate of 9.84% of closed cases and the 3 countries in the Northern Triangle in terms of active cases and deaths per million are as follows even though the data may be suspect as underreported (regardless of number we need no more cases):                                     Guatemala:  Active Cases:  33,806 Deaths/M 572
Honduras:    Active Cases: 191,026 Deaths/M 784
El Salvador:  Active cases:     8,177 Deaths/M 406
US Vaccinations: As of 8/2/2021 346.9 million doses at up from .663 million per day to .673 per day (down to 7 months to go for 75% of population vaccinated) and in California 88,024 per day which means if the rate does not increase it will take us now some 4 months to have 75% of the population of California vaccinated which many believe is necessary to develop herd immunity (other than Flip Flop Fauci who may believe that 90% is required).  In California 45,340,695 total doses have been given (88.9% of doses received to exceed the U.S. average of 86.7%), but even with the pressure of a recall to be scheduled this fall which hopefully end Newsom’s term, California has  moved  up from 17th  to 16th tied with Utah  of the 50 states in terms of the percentage of doses administered as a percentage of doses delivered to the states and at 53.1% of its population fully vaccinated compared to the U.S. average of 49.7% has moved up  from 19th to 18th among the 50 states.  A long way to go still to get herd immunity in terms of getting vaccines received into arms and the percentage of the population fully vaccinated compared to other states which means a great reason to recall this inept and hypocritical governor.
Non  CV News: Ilhan Omar is opening her anti-Semitic mouth again comparing the U.S. and Israel to terror groups such as the Taliban and Hamas and refusing to back down; Gunther Hashida has become the 3rd Capitol Police Officer who responded to the events of January 6, 2021 to commit suicide with authorities not able to conclude his suicide was linked to the events; Meghan McCain will soon be leaving as the only voice with a clue on The View predicted Ron DeSantis would bury the Illegal Alien Supporter Queen Harris in a race for the Oval Office; in a refreshing but surprising move, the New York State United Teachers reiterated its opposition to a vaccine mandate being proposed by Governor Cuomo; Biden was ranting that the voting system is under attack by Republicans due to their efforts to suppression voting by requiring ID’s (it is under attack but the source of attack is unsolicited mail in voting, ballot harvesting and opposition to what should be a no brainer—requiring a voter to prove his identity to prevent fraud); in a déjà vu spoof where Chris Cuomo handed gigantic nalas swabs to brother Andrew for COVID-19 at a Red Tennessee fund raiser McCarthy was presented with a gigantic gave to represent loss of the Blue majority in the House and he joked that given the size hard not to hit Pelosi which brought the blues howling that he should resign (clearly humor is dead among the Blues); the once favorite American women’s soccer team had too much woke and lost to Canada 1-0 on a penalty kick blowing their chance for a repeat Gold Medal to be relegated to trying to salvage a bronze (which it woke still rules for the team it will be a hard path); Senator Graham has announced he has been infected with COVID-19 even after being fully vaccinated and has mild flu like symptom and will be quarantining himself for the next 10 days (more proof that vaccines will protect you from death or serious illness but not being infected which will provide fuel to the fire for mask mandates); Avenatti representing himself in his California fraud trial has filed motions for mistrial alleging the government failed to provide information obtained by 9 witness called to testify against him; after Biden was excoriated for lying that he drove a 18 wheeler in his youth when the closest he ever got was a 4-6 wheel school bus and being a passenger in an 18 wheeler, leave it to the political cartoonist heap ridicule on another Biden lie: 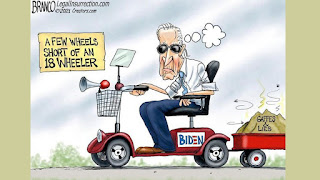 Chicago Gun Violence: Hey Jackass.com is alive and well to collect data to show that through August 1, 2021, gun violence involving mostly persons of color shooting mostly persons of color in Chicago is alive and well with 2588 persons shot of whom 445 have died.
As always, I hope you enjoy today’s holidays and observances, factoids of interest for this day in history, a video recording musical link to “Kiss and Say Goodbye” by The Manhattans, the fact that you capable of acting with schematism; and a quote by Timothy D. Snyder on Treblinka, secure in the knowledge that if you want to send a gift for any memorable events like Labor Day, college graduations, birthdays, weddings, or anniversaries, you know that the Alaskanpoet can provide you with a unique customized poem at a great price tailored to the event and the recipient. Please contact me for details on pricing.
1.  National CAD Day—honoring the efforts of Patrick J. Hanratty, known as the Father of CAD, to create this amazing computer design tool to enable product designers to create new designs effectively and to implement easier changes in the design process.
2.  National Dinosaur Day—celebrating those fortunately extinct reptiles that appeared on Earth some 245 million years ago and lived for some 166 million years before dying out but fortunately leaving a fossil record of their existence.
3. 1976 Number 1 Song USA—the number 1 song in 1976 on this day was “Kiss and Say Goodbye” by The Manhattans on a run of 2 weeks in that position to join 25 other songs that achieved number 1 status and join 14 other acts who achieved their first number 1 song on the Billboard Hot 100. Here is a video recording of “Kiss and Say Goodbye” by The Manhattans: https://www.youtube.com/watch?v=wtjro7_R3-4  The black R&B quintet was from Jersey City and was formed in 1962 and with new members is still performing today.
4.  Word of the Day—the word of the day is “schematism” which means n impromptu act which given his tied to his teleprompter and note cards would be a rare site to see from our fading president.

5.  Hard to Believe But Honor Among Thieves—bemoaning the birth on this day in 1897 of Karl-Otto Koch, an SS Colonel who was the first head of the Buchenwald Concentration Camp but was transferred after allegations of theft, corruption and murder to the Majdanek Concentration Camp as Camp Commander until 86 Soviet POW’s escaped causing him to be charged with criminal negligence and removed to work in the SS Personnel Office in Berlin. His past at Buchenwald caught up with him and he was charged with murder and embezzlement, tried and sentenced to death for disgracing himself and the SS and executed by a SS firing squad on April 5,1945 5 days before American troops liberated Buchenwald.

On this day in:
a. 1873 to the joy of future tourists who would be spared the stench of urine and feces and the debris of used needle for a good period of time, San Francisco’s Clay Street Railroad of Cable Cars commenced operations.
b. 1939 Alfred Einstein and Leo Szilard wrote a letter to President Roosevelt indicating a bomb in which the atom were split was feasible and urged him to have it built.
c. 1943 Jewish inmates at the Treblinka Concentration Camp, where over 900,000 Jews were murdered, revolted, and managed to burn numerous buildings before several hundred escaped. Sadly, about half who did were captured and executed. On a silver lining the damage to the camp caused it to be shut down.
d. 1948 a British South American Airways Avro Lancastrian carrying 6 passengers and 5 crew on a flight from Buenos Aires to Santiago, Chile crashed into Mount Tupungato, killing all 11 aboard and became buried in the snow and ice not to be discovered for 50 years.
e.  1990 Iraq invaded Kuwait and quickly overran the country  which led to the Gulf War.
Reflections on Treblinka: Between July 1942 and June 1943, only 4,705 Jews were admitted to the United States-fewer than the number of Warsaw Jews who were killed on a given day at Treblinka in summer 1942.”— Timothy Snyder, Professor of History at Yale and expert on the Holocaust.

© August 2, 2021 Michael P. Ridley aka The Alaskanpoet
Alaskanpoet for Hire, Poems to Admire
Poet Extraordinaire, Beyond Compare
A Unique Gift, All Recipients a Lasting Gift

Posted by Michael P. Ridley aka the Alaskanpoet at 2:48 AM